One week ago we reported that central bank purchases of gold in 2014 were the second highest in the past 50 years, driven by purchases out of Iraq, Kazakhstan and – most of all – Russia, with no offsetting selling. But what about other more conventional sources of demand? Take jewelry, which while very strong in the beginning of the century, dropped off after the Great Financial Crisis, and then tumbled again after India imposed numerous restrictions on gold imports, which however merely forced the local population to find novel ways of smuggling gold into the country.

This is what the WGC had to say about gold jewelry demand in 2014.

Having suffered weak year-on-year comparisons for much of 2014, jewellery demand rallied to a strong finish, reaching 575t in the fourth quarter – 1% higher than Q4 2013. The sector was buoyed by good festival- and wedding-related demand in India, as well as by the seasonal holiday effect in the US and UK. Global annual jewellery demand of 2,152.9t, although down 10% year-on-year, was above the five-year average by a comfortable 5% margin. 2014 was a standout year for Indian jewellery. Demand reached a record 662.1t, topping the previous year’s total by 8%. This in spite of government measures designed to restrict gold imports being in place for much of the year. Wedding- and festival-related purchases drove robust demand of 179.1t in the fourth quarter, up 19% over Q4 2013. Indeed, the second half of the year was the strongest H2 in our data series (from 2000), up 37% on H2 2013.

US jewellery demand was again notable for its improving trend: Q4 was the seventh consecutive quarter of year-on-year growth and the strongest fourth quarter since 2009. Similarly, 2014 full year demand of 132.4t was the highest for five years. That being said, it clearly has to be acknowledged that the market remains far  below pre-crisis levels of jewellery demand, which between 2000 and 2006 averaged 360t per year.

In considering jewellery demand, it is interesting to look at the contribution that the sector has made over recent years to the accumulation of above-ground stocks. Jewellery is by far the largest component of above-ground stocks of gold – accounting for almost half of the 177,200t of gold estimated to be held by private owners and central banks. Jewellery consumption less recycling provides a fairly good proxy for net demand (as the vast majority of recycled gold will be old jewellery). In years gone by net jewellery demand regularly added as much as 2,000-2,500t per year to above-ground stocks. This plunged to less than 100t during the depths of the global financial crisis as distress selling of gold skyrocketed in tandem with a slump in jewellery demand.

The last two years have seen net jewellery demand recover to exceed 1,000t. This is partly due to a firming of jewellery demand as the world has emerged from the crisis. But by far the greater impact comes from the recycling sector and the sharp reduction in the volumes of gold being sold back onto the market. Above-ground stocks of jewellery should continue accumulating at a similar rate as we expect recycling to remain low in 2015, counterbalancing the recent growth in mine production. 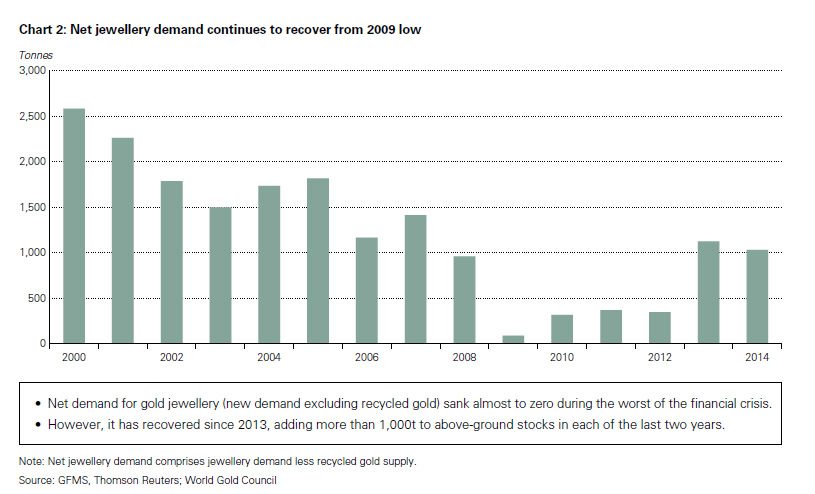 In short, even with extended draconian measures created by India to prevent capital account outflows as a result of uncontrolled gold imports (which still take place only “under the table”), a whopping 1000 tons of gold ended up in the form of gold trinkets in 2014 mostly in India, and to a lesser extend in China.

All of that is about to change: earlier today India’s Economic Times reported that the RBI, surely facilitated by the drop in oil prices – a key import for India – has finally lifted its ban on imports of gold coins and medallions by banks and trading houses.  The RBI in a notification also said banks are permitted to import gold on consignment basis. Domestic sales will be, however, permitted against upfront payment only.

The RBI and the government have been receiving requests for clarification on some of operational aspects of guidelines. Aiming to tame the then widening current account deficit (CAD), the central bank in August 2013 had prohibited imports of gold coins and medallions besides restricting inbound shipments of the metal.

Under the 80:20 scheme, which was withdrawn on November 28 last year, gold imports were linked with its exports.

The notification further said the obligation to export under the scheme will continue to apply in respect of unutilised gold imported before November 28, 2014.

“Banks are free to grant gold metal loans,” it said, adding that Star and Premier Trading Houses (STH/PTH) can import the metal as per entitlement without any end use restrictions.

And it’s not just jewelry: per the RBI announcement:

“Nominated banks are now permitted to import gold on consignment basis. All sale of gold domestically will, however, be against upfront payments. Banks are free to grant gold metal loans.”

Why is that important? Because as we wrote in January 2013 in “Don’t Show Bernanke This Chart Of Gold Loans In India“, before the import ban, gold in India was most certainly money, and the amount of gold loans being created in India was simply exponential. 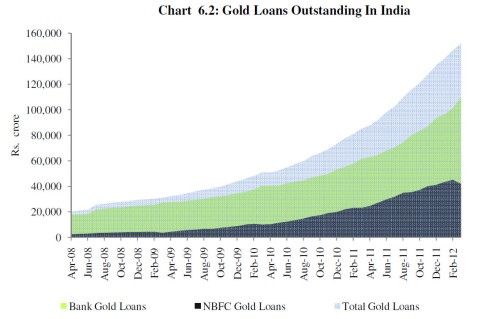 However, since the importing of gold and its reuse as a money-equivalent collateral meant even more undesired capital outflows, the RBI was forced to halt the practice. Until now.

What all of the above simply means is that the government, tired of fighting a losing war with gold smugglers, has opened up one more avenue by which gold can enter the country on an official, and taxable basis, and as a result physical gold will now resume flowing into India officially, a process which depending on how much gold is being mind out of the ground could mean a rapid depletion of the net available gold in any one period.

It also means that going forward, India’s true gold demand will finally be on the books, as banks find numerous loopholes to pass on the imported gold to end consumers – either in physical or loan form – only this time with the total tonnage once again being officially represented, as was the case in previous years.

By way of example, gold imports surged by 8.13% Y/Y to $1.55 billion in January after the initial RBI restrictions were eased. Expect this number to spike that much more in the coming months as banks rush to reload on physical, especially with paper gold prices determined mostly by ETFs and manipulated by central banks, continue to make purchases (in most currencies, and certainly the dollar) increasingly more attractive, just as the CEO of Rosneft explained is happening to oil right now.

Finally, for those who are unaware, India is considered the largest importer of gold – a title it shares on again, off again with China, the bulk of whose gold imports are also undocumented as they end up almost exclusively in some bonded warehouse where the gold is used as (infinitely) rehypothecated collateral for Commodity Funding Deals and/or in the vault of the PBOC.