– Russia Dumps Most US Paper Ever As China Reduces Treasurys Holdings To January 2013 Levels (ZeroHedge, Feb 18, 2015):

Back in December, Socgen spread a rumor that Russia has begun selling its gold. Subsequent IMF data showed that not only was this not correct, Russia in fact added to its gold holdings. But there was one thing it was selling: some $22 billion in US Treasurys, a record 20% of its total holdings, bringing its US paper inventory to just $86 billion in December – the lowest since June 2008. 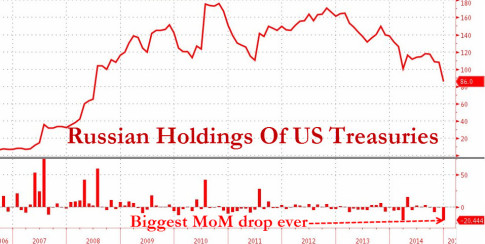 It wasn’t just Russia: the country that has ever more frequently been said to be in the same camp as Russia – and against the US – namely China, also sold another $6 billion in Treasurys in the last month of 2014, which would have made its US treasury holdings equal with those of Japan, if only Tokyo hadn’t also sold over $10 billion in the same month. 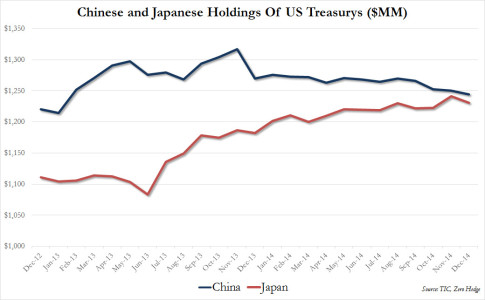 And while we know that Russia used at least some of the proceeds to buy gold, the bigger question is: just what is China buying with all these stealthy USD-denominated liquidations, and how much gold does the PBOC really have as of this moment.