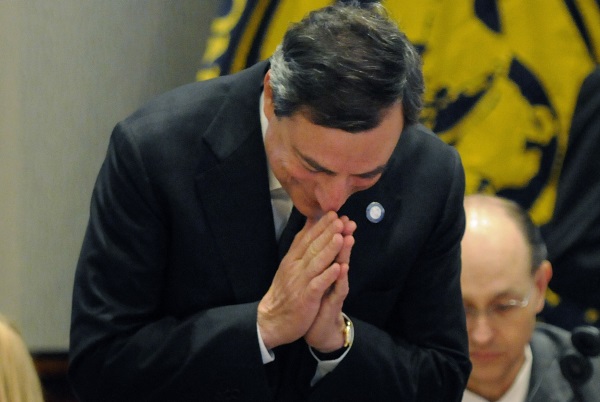 Today, for the first time, the ECB released minutes from its historic January 21-22 meeting during which the ECB unleashed QE. While hardly containing anything earthshattering, here are the main highlights. First, from Bloomberg:

And the key excerpt from the section discussing monetary policy:

It was also cautioned that the case for action could not be separated from the issue of the choice of instrument. Purchases of sovereign bonds were associated with a number of challenges and side effects, particularly related to the nature of sovereign bond purchases within the specific institutional framework of Economic and Monetary Union. Therefore, purchases of sovereign bonds should remain a contingency instrument of monetary policy, to be used only as a last resort in the event of an extremely adverse scenario, such as a downward deflationary spiral. However, thus far there was no evidence of a serious risk of deflation, which clearly argued against mobilising the instrument of sovereign bond purchases at the current meeting.

As regards the most appropriate instruments for achieving additional monetary stimulus, the point was made that purchases of corporate bonds, possibly complemented by purchases of supranational bonds, could be seen as the most natural extension of the Governing Council’s credit easing package, representing a more targeted measure directed towards a further improvement in the financing conditions of firms. However, it was widely judged that, given the current level of corporate bond yields and the size of the corporate bond market, the credit easing potential of corporate bond purchases appeared rather small, and therefore offered only limited scope for providing the degree of accommodation needed at this stage. At the same time, the remark was made that this asset class should not be excluded from future consideration, if needed.

Consequently, it was broadly agreed that any further monetary policy measure would need to involve purchases of government securities. One of the variants mentioned, namely to limit the purchases to a portfolio comprising only sovereign bonds of the euro area countries with the highest credit ratings, was generally regarded as being insufficiently effective.

Against this backdrop, a large number of members were in favour of expanding the existing private sector asset purchase programmes to include purchases of a broad portfolio of securities of euro area governments and agencies and of supranational institutions. Purchases of sovereign debt appeared to be the only remaining instrument of sufficient scope to provide the necessary monetary stimulus to deliver on the ECB’s price stability objective. Through the compression of euro area sovereign yields, portfolio rebalancing effects could be set in motion, including spillovers to the prices of a multitude of other assets. As a result, forces would materialise which would lead to an easing of conditions across broad sources of financing, including those relevant for the borrowing conditions of euro area NFCs and households.

Some degree of caution was still expressed with regard to the potential effectiveness of sovereign bond purchases. Sovereign bond yields in the euro area had already approached rather low levels, limiting the scope for further yield compression and, consequently, the potential funding cost relief to be passed on to final borrowers’ financing conditions. In addition, portfolio rebalancing effects could turn out to be more muted than envisaged given the ongoing need for balance sheet adjustment in the financial and non-financial sectors. Moreover, in the United States the capital market-based transmission channels were at work, most notably via direct effects on mortgage and housing markets and the greater role of corporate bond markets, and these factors might be weaker in the case of the euro area.

There was broad agreement on conducting the additional purchases of securities according to Eurosystem NCBs’ shares in the ECB’s capital key. Regarding the residual maturity of the sovereign bonds to be purchased, there was broad agreement that a residual maturity of two to thirty years would strike a good balance between ensuring an appropriate universe of purchasable sovereign bonds and limiting the risks of market distortions and the crowding-out of investors in the longer-maturity segment.

As regards the issue limit, broad agreement prevailed that an issue share limit would ensure proper market functioning, counter monetary financing concerns and safeguard “pari passu” treatment. An issue share limit of 25% needed to be applied in order to avoid obtaining a blocking minority in a debt restructuring involving collective action clauses. Therefore, this issue limit also comprised the existing Eurosystem holdings of sovereign bonds in the context of the Securities Markets Programme and any other portfolios owned by Eurosystem central banks.

Likewise, the issuer limit of 33% was broadly supported as a means to safeguard market functioning and price formation as well as to mitigate the risk of the ECB becoming a dominant creditor of euro area governments. To this end, it was judged appropriate to apply the 33% limit to the universe of eligible assets in the two to thirty-year range of residual maturity. Moreover, to ensure compliance with the monetary financing prohibition laid down in the Treaty, the application of an appropriate blackout period was viewed as important.