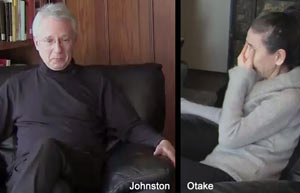 – Professor: Fukushima workers told us about “all of the deaths” happening at nuclear plant — We stayed at their dormitory and “learned a lot about what’s going on there, it really is not pretty” — Instructor who was with him on trip weeps while topic is discussed (VIDEO) (ENENews, Feb 17, 2015):

Asahi Shimbun, Feb 17, 2015: [TEPCO] submitted its plan to provide wide-ranging training programs for workers [after] a string of accidents, some of them fatal… Nine serious accidents occurred between March 2014 and January 2015, resulting in two deaths and eight serious injuries. The labor ministry ordered TEPCO to develop measures to prevent similar incidents following the death of a 55-year-old worker in January… [TEPCO] submitted the plans on Feb. 16 to the labor ministry… outlining countermeasures against occupational injuries and deaths. The report attributed the accidents to tight schedules and a lack of experience… a TEPCO official vowed that the utility would proceed with decommissioning the reactors with the highest priority on safety, saying, “We will ascertain (the pressure on the workers imposed by tight deadlines) by enhancing communication.”… “We have to prevent a situation in which workers feel it is no longer safe to work at the Fukushima plant,” a TEPCO official said. The plant operator also intends to accelerate decommissioning and improve efficiency… so employees will be able to work longer at the plant site before reaching the annual radiation exposure limit of 50 millisieverts.

AFP, Feb 17. 2015: In its preliminary report issued yesterday the IAEA also said it “strongly encourages Tepco… to reinforce safety leadership and safety culture” at the plant, where some 7,000 workers are engaged. One man died there in January after falling into a water tank. “There is still some room to enhance this interaction between radiation safety and labour safety through more integrated plans,” [an IAEA official] said.

Watch the discussion with Prof. Johnston and Eiko Otake here