Since late 2013, The NY Times reports that an unknown group of hackers has reportedly stolen $300 million ­- possibly as much as triple that amount – from banks across the world, with the majority of the victims in Russia. The attacks continue, all using roughly the same modus operandi… 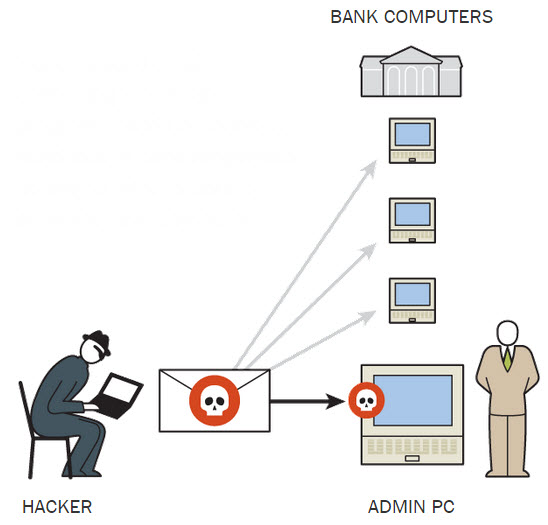 Programs installed by the malware record keystrokes and take screen shots of the bank’s computers, so that hackers can learn bank procedures. They also enable hackers to control the banks’ computers remotely.

By mimicking the bank procedures they have learned, hackers direct the banks’ computers to steal money in a variety of ways: 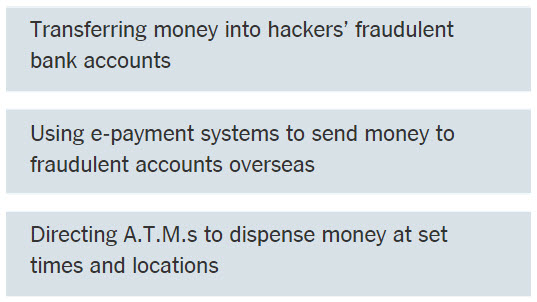 As The NY Times reports,

In late 2013, an A.T.M. in Kiev started dispensing cash at seemingly random times of day. No one had put in a card or touched a button. Cameras showed that the piles of money had been swept up by customers who appeared lucky to be there at the right moment.

But when a Russian cybersecurity firm, Kaspersky Lab, was called to Ukraine to investigate, it discovered that the errant machine was the least of the bank’s problems.

The bank’s internal computers, used by employees who process daily transfers and conduct bookkeeping, had been penetrated by malware that allowed cybercriminals to record their every move. The malicious software lurked for months, sending back video feeds and images that told a criminal group — including Russians, Chinese and Europeans — how the bank conducted its daily routines, according to the investigators.

Then the group impersonated bank officers, not only turning on various cash machines, but also transferring millions of dollars from banks in Russia, Japan, Switzerland, the United States and the Netherlands into dummy accounts set up in other countries.

In a report to be published on Monday, and provided in advance to The New York Times, Kaspersky Lab says that the scope of this attack on more than 100 banks and other financial institutions in 30 nations could make it one of the largest bank thefts ever — and one conducted without the usual signs of robbery.

Kaspersky Lab says it has seen evidence of $300 million in theft through clients, and believes the total could be triple that.

No bank has come forward acknowledging the theft…

The silence around the investigation appears motivated in part by the reluctance of banks to concede that their systems were so easily penetrated, and in part by the fact that the attacks appear to be continuing.

The managing director of the Kaspersky North America office in Boston, Chris Doggett, argued that the “Carbanak cybergang,” named for the malware it deployed, represents an increase in the sophistication of cyberattacks on financial firms.

“This is likely the most sophisticated attack the world has seen to date in terms of the tactics and methods that cybercriminals have used to remain covert,” Mr. Doggett said.

Mr. Doggett likened most cyberthefts to “Bonnie and Clyde” operations, in which attackers break in, take whatever they can grab, and run. In this case, Mr. Doggett said, the heist was “much more ‘Ocean’s Eleven.’ ”

“We found that many banks only check the accounts every 10 hours or so,” Mr. Golovanov of Kaspersky Lab said. “So in the interim, you could change the numbers and transfer the money.”