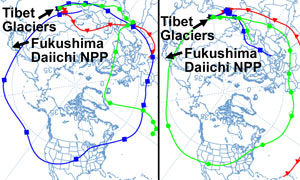 Spiegel Online International (Der Spiegel, German news magazine), Feb. 5, 2015 (emphasis added): [It’s] the worst accident in the history of civilian atomic power… The Fukushima catastrophe changed the world. Nuclear reactors melted down on live television and twice as much radioactive material was released as during the Chernobyl accident in 1986. The disaster… poisoned entire landscapes for centuries and killed hundreds of thousands of farm animals… Fukushima is more than just a place-name, it is an historical event…

Scientists from the Chinese Academy of Sciences, University of Venice, and Nanjing University, Feb 6, 2015: The β radioactivity of snow-pit samples collected in the spring of 2011 on four Tibetan Plateau glaciers demonstrate a remarkable peak in each snow pit profile, with peaks about ten to tens of times higher than background levels. The timing of these peaks suggests that the high radioactivity resulted from the Fukushima nuclear… The released radioactive nuclear substances not only polluted Japan… but also spread to other areas of the Northern Hemisphere via atmospheric circulation and ocean currents, affecting the hemispheric and even global environment. As an overdose of nuclear radiation may seriously threaten human health and wildlife survival, this nuclear accident has caught the attention of the world. The radioactive fallout [was] detected in the atmosphere, soil, surface water, and pastures in the low-altitude regions of North America… Much of the radioactive material was transported by the westerlies, resulting in the fallout over North America… [T]o reach the Tibetan Plateau, material transported by the westerlies has to first circle much of the globe… In May 2011, snow-pit samples were collected on the Gurenhekou Glacier… Dongkemadi Glacier… Muztag Glacier and Yuzhufeng Glacier… In 2005 and 2007, we drilled ice cores… Tanggula ice core [and] Yuzhufeng ice core… Clearly, the peak β radioactivities in the snow pits… are much higher than that in the corresponding local ice cores, and even overwhelm the peak β radioactivities caused by past atmospheric thermonuclear tests in the early 1960s… The peak β radioactivities… are 11.0 and 92.4 times larger than their local average background levels… attributed to the Fukushima radioactive fallout… The Fukushima nuclear accident… created a radioactive horizon that can be used as independent age markers in snow and ice cores in the Northern Hemisphere… providing a direct record of the impacts of human activities on the Earth’s environment…