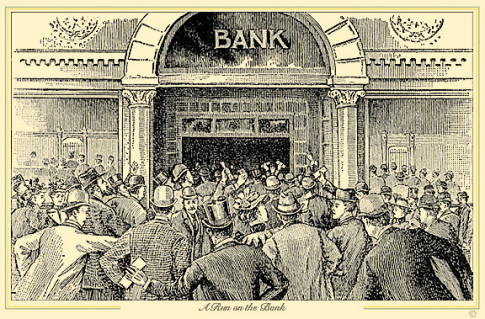 – How Fast Would Contagion Spread If Greece Exits The Eurozone (ZeroHedge, Feb 10, 2015):

Perhaps the most curious aspect of this, third, Greece “”exit crisis, is just how completely unnoticed it has gone by the capital “markets”, or rather non-Greek capital markets. Which, considering the changed dynamics of the negotiations, was to be expected. As explained again earlier, this time around it is imperative on the central planning regime to keep stocks and bonds as stable as possible heading into tomorrow’s negotiations with Greece, because should global risk not bat an eyelid, it will mean that Greek leverage is non-existent as the “market” (which courtesy of central banks no longer really exists) does not anticipate any contagion, and is why the S&P has actually been surging in the past week.

There are two problems with this, as UBS laid out yesterday: 1) (lack of) risk no longer reflecting reality doesn’t make sense and 2) “Breaking the deadlock” in negotiations voluntarily may not be easy, “hence, outside pressure—in the form of financial and market dislocations—seems necessary to focus minds.”

However, as we noted yesterday, point 2 is only relevant for Europe: Syriza, and largely Greece, no longer cares what the stock market does: only the Eurozone does (and as long as the ECB is there to backstop it in any case, the European “market” isn’t going anywhere). If anything, the only concern of the Greeks is what happens to bank deposits, although by this point anyone who would have pulled their money from the bank already has.

Which means that once again, thanks to central bank intervention, the discounting process is broken, and has been skewed to reach a specific political outcome. However, in the worst case scenario – one in which Greece does exit the Eurozone – it will simply mean that the moment of reality has been at best postponed. And the moment when the can kicking ends and reality can no longer be avoided is the millisecond after Greece announces it has quit the Eurozone.

What happens then is why UBS has dedicated an entire section to the contagion risk which is now being thoroughly masked by central bank intervention, and which will only emerge, and with a vengeance,  if the worst case does indeed transpire. Needless to say, when it emerges it will be fast.

Here is how UBS believes a Greek Eurozone contagion will play out:

The contagion risk of a euro exit reflects the fact that there is a meaningful risk that other countries would join Greece in leaving the euro. The euro is patently not an optimal currency union at the moment, which gives economic momentum to the idea of a broader fragmentation.

Whether other countries leave the euro is contingent on two questions with binary outcomes:

A “double lock” is required to prevent contagion. An assurance that bank deposits are guaranteed by the ECB is completely worthless if the general public believe that the country is going to leave the Euro. If one believes that one’s country may leave the euro, then what the ECB does or does not do will no longer apply within one’s country, and so it is rational to withdraw one’s money sooner rather than later. The parallel here is to the Czech and Slovak monetary union break-up in 1993; the governments both assured the public that the monetary union would stay and their savings were safe, but the public did not regard these statements as credible and so removed their savings from banks. The process became self-fulfilling as the extent of deposit flight contributed to the governments being forced to break their promises and end the monetary union.

If on the other hand, the authorities (in this case the euro area governments and the ECB) demonstrate so strong a commitment to the integrity of the remainder of the euro that they convince depositors that their money is safe, then there is no motivation to withdraw money from the banking system of a country as the assertion that depositors will be protected has validity. The parallel here is the US monetary union fragmentation and reforming between 1932 and 1933. The statements of the Federal government were not believed (and the monetary union fragmented) until what has been referred to as the “one, two punch” of a closing of the entire banking system and a “fireside chat” from the newly inaugurated President Roosevelt. The scale of the emergency banking legislation was seen as sufficient to guarantee the integrity of the system.

It is very difficult for governments to control the progress of a monetary union break-up because the example of one country exiting will create a precedent in the eyes of other members of the monetary union. The transmission channel is not government bonds, nor equities, not currency markets, but banks. In the event of a Greek exit from the euro, the loss in the real value of Greek bank deposits would encourage bank depositors in other countries to withdraw their funds. This is not a question of bank solvency in these other countries – just as deposit withdrawal from Scottish banks ahead of the Scottish referendum in 2014 was presumably not motivated by questions of solvency. Rather the motive is the perception of risk around what currency one will receive in exchange for one’s deposit in the future, and what that currency will buy relative to what it can buy today.

The process can be very rapid indeed.

In its 1933 report the US Federal Reserve commented, with commendable understatement, that at the start of the year “In addition to currency hoarding, there were substantial transfers of deposit accounts from banks in which depositors had lost confidence to other institutions, involving in many cases the shift of funds from one section of the country to another.”

Nevada was the first state to declare a bank holiday on 31 October 1932. The contagion was initially quite slow, but then accelerated – on 4 February 1933 Louisiana joined in, and then on 14 February Michigan declared a four-day holiday and then extended it. Michigan’s actions are regarded as the tipping point for contagion. Less than a fortnight later a bank holiday was declared in Maryland. On 1 March 1933 four states declared holidays, another six declared on 2 March, another seven on 3 March, and five (including New York) on 4 March 1933. On 6 March 1933 the national banking system was closed by Presidential order.

In the case of the euro area it seems unlikely that the current, incomplete banking union and non-existent fiscal union would be sufficient to prevent the contagion of bank runs spreading to other countries in the wake of a Greek exit from the euro. The starting point is that other countries are at risk of departure in response to a Greek exit. If the political status quo is maintained, it has to be thought likely, maybe probable, that Greece will not be alone in exiting the euro. It would be irrational for depositors to gamble their life savings if they believe that there is even a 5% chance that their country could leave the Euro. A 5% chance of a 60% loss in the value of one’s savings (assuming a Greek parallel) would make the effort of withdrawing or transferring funds worthwhile. As with the deposit withdrawal within Greece, once the first spark of fear has been ignited the conflagration of contagion is likely to spread very rapidly.

The issue is whether, subsequent to those strains emerging, new policy initiatives from the euro area would be sufficient to change perceptions around the credibility of the political will to defend the integrity of the euro. Unlimited support from the ECB to euro area banks, large-scale debt monetisation and euro area fiscal confederation would be the sort of policies that could change the perception of credibility. All, of course, come at a cost. One metric to measure the success of such policies might be analysis of the contagion not of bond or other financial markets, but of household sight deposits at banks. The correlation of the change in Greek deposits with the changes in sight deposits in some other peripheral countries has also been high in the past (notably in the wake of 2008 and in the wake of the first wave of concerns about membership of the euro area). While the correlations of deposit change are generally quite low, they are rising. Correlation is not causation, and there are many other factors (including overall economic performance) that can encourage such a correlation, but this fact does rather emphasise the risks.

The rise of European anti-establishment political parties in recent years has, perhaps, increased the risk of a more widespread contagion to other financial systems. Deference to authority, and particularly to authority within Europe, has diminished. Official assurances of the “irrevocable” monetary union (except for Greece) would likely carry less weight. The fact that anti-establishment parties have (to generalise) tended to draw support from lower skilled, older voters may further compound the problem. This economic demographic is less able to adjust their savings so as to hedge break-up risk (making physical cash the main option), and as an older age cohort they are more likely to have savings that are vulnerable.

This then adds an entirely unpredictable element to the Euro area cost of a Greek exit from the euro. The direct costs can be calculated, and an intelligent approximation of the costs of increased risk can be factored in. However, if the break-up of the union expands, the direct costs expand exponentially (because the costs of the Target 2 system increase, and the costs of recapitalising for the remaining members increase, and the costs of financial system exposure increase). The transmission of fear may not be to the most obvious of candidates of course – this is not a question of solvency or of economics. If a Greek exit from the euro leads to other countries exiting, it will be the lack of plausibility of policy makers that generates the collapse.

Which is precisely why Syriza is still, in this late 11th hour, maintaining its uncompromising position in hopes that Europe finally grasps that the downside risk from a Grexit is far, far greater than the downside from appearing weak and caving to one peripheral nation. It remains to be seen if Europe agrees with this, although following today’s seesaw rumor-induced action, it appears that the standoff may well end without any agreement.