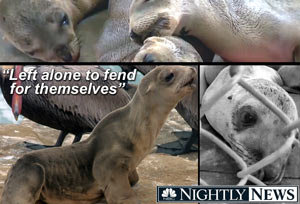 Fox 5 San Diego transcript, Feb 9, 2015 (emphasis added): It’s been a record year right now for seal and sea lion rescues all along our coast… For some reason sardines and crayfish have pretty much disappeared from the Pacific Ocean — and that is having a very negative impact on seals and sea lions, especially their babies…

Dr. Todd Schmitt, who runs Sea World’s Animal Rescue Center, Feb 9, 2015: “This time of year, we’re seeing 10 times the numbers we’d normally see during the stranding season… They’re all just severely malnourished. They’re coming in emaciated, dehydrated, really severe body condition… They just can’t find food on their own… We think the food – fish — they’re looking for isn’t there. That crayfish, the sardines, have just vanished from California waters, at least around the Channel Islands and coastal areas, so they’re just not able to find food… They’re struggling to survive right now.”

NBC Nightly News, Feb. 8, 2015: Only five weeks into 2015, more than 350 sea lions have been rescued. Marine biologists are worried that this year’s rescues could… exceed [2013’s] Unusual Mortality Event [NOAA: “For the past decade, sea lion strandings have averaged about 250“] … “We had rescued 19 California sea lions in January [2013],” Sea World San Diego Senior Veterinarian Hendrick Nollens told NBC News. “This year we already rescued 87 pups in that same month. So this event seems to be much larger.”… lack of fish… may be causing the increased strandings this year, but scientists are still trying to determine what is causing the shortage. “It’s a bunch of reasons coming together to pretty much create what we could call a perfect storm,” [Pacific Marine Mammal Center’s Keith Matassa] said… “There’s a lot of times we cry,” volunteer Irene Gilgoff told NBC News.

NBC News transcript, Feb. 8, 2015: Upon arrival a vet checks their vitals. This girl’s signs look promising. Richard Evans, veterinarian: “We’ve got a shot on this one. It’s going to be slow, in the area of months.”… Normally they’d have just 2 or 3 animals this time of year but right now the count is in the 40s — and rising rapidly… It’s hard to say why this is happening.