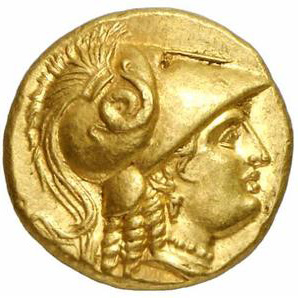 It never fails: every time redenomination risks and the specter of the (New) Drachma rear its ugly heads, Greeks, like dutiful Austrian economists, realize that Neoliberal economics is nothing but a steaming pile of drivel that only works when everyone is “confident” and gets deeper in debt with a smile on their face while failing in every other instance, and decide that the time has come to convert their paper wealth into hard assets. It happened in 2010, in 2012, and now that Greece is on the verge of its third Grexit in the past 5 years, it is happening again.

As Bloomberg reports, “Greek demand for gold coins is rising as investors search for a safe haven from the country’s political turmoil, according to the U.K. Royal Mint.”

“There has been a noticeable increase in demand in this last quarter,” Lisa Elward, head of bullion sales at the Royal Mint, said in an e-mail to Bloomberg News. “We tend to see an upsurge in sales at times of political and financial uncertainty.”

They said that with a straight face because in Greece “times of political and financial uncertainty” are now a monthly if not quarterly development. As a result, Greek investors are turning to gold. The Royal Mint declined to provide exact sales figures for the gold coins, known as Sovereigns.

Domestically, the Greek gold demand is currently run-rating at more than double that of Q4 2014: the Bank of Greece sold 5,849 Sovereign coins in January, according to an e-mail from the central bank. Bloomberg cites government data which show sales of 7,857 coins in the last quarter of 2014.

Why gold?  “The one thing everyone knows about gold is it is a good thing to hold if your currency is about to devalue,” Matthew Turner, an analyst at Macquarie Bank Ltd., said via phone. “It would be understandable for Greeks to buy gold because they are afraid of losing their money.”

Hardly surprising, and yet one would think that with the entire world hell bent on destroying its currency now that, as we first observed earlier, for the first time ever global central banks are about to monetize more than 100% of global debt issuance… 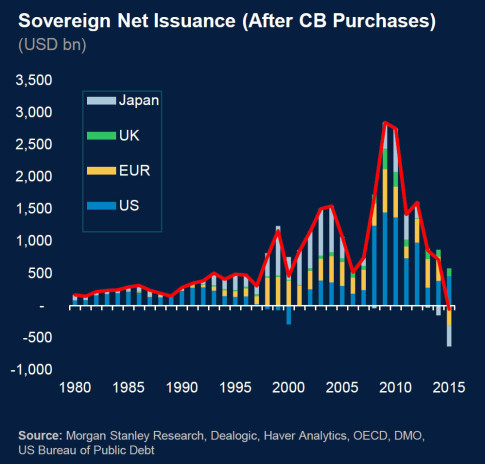 … that everyone’s demand for gold would be higher instead of just those on the edge of completely monetary collapse. We suppose we should thank anyone who is actually surpressing the price of paper gold in their increasingly more desperate attempts to telegraph that central banks are still in control when with every passing day it becomes abundantly clear they are not.

But back to Greece, where withdrawals from banks may have exceeded 11 billion euros in January in the run-up to the elections that resulting in the dramatic victory for Tsipras and his anti-austerity Syriza. Expect withdrawals to accelerate to the point where ATM lines start forming. Of course, if there is no agreement on the Greek bailout continuation by Friday as the Eurozone warned, then those lines will only get bigger. As will Greek demand for gold:

“During periods of monetary uncertainty people will always think gold is a useful addition to their portfolios,” Turner of Macquarie said.

But why: can’t they just BTFD and hope that while central bankers are unable to preserve the sanctity of a monetary union which as recently as 2014 was considered untouchable, they will have no problem with keeping the S&P at or near it all time high in perpetuity?