– The World’s Best Known Global Shipping Index has Crashed To Its Lowest Level Ever (ZeroHedge, Feb 9, 2015):

Having fallen for 47 of the last 51 days, The Baltic Dry Index (tracking the cost of shipping dry bulk from iron ore to grains) has been collapsing in a well-documented manner by Zero Hedge (though not the mainstream media). With Cramer having told investors of its importance previously, it will be hard to ignore the fact that, as of this morning, the index of global shipping costs has never (ever) been lower at 554. We leave it to readers to decide what they think this means (but we already know what it means for shippers and ship-building companies). 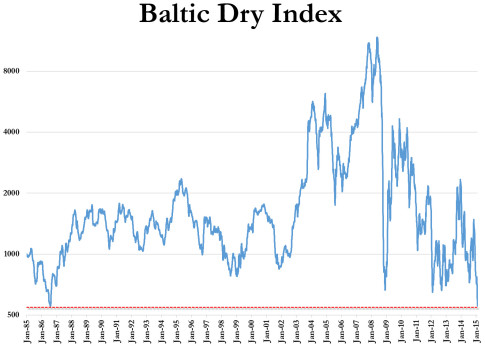 On the back of the total collapse in Chinese imports and exports, is this any surprise?