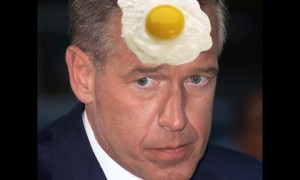 What should we make of Brian Williams’ admission that he lied about his helicopter being forced down in Iraq?

Initially, he may have lied about other things, as well.

But there’s a bigger story here …

Mainstream reporters are ALWAYS pro-war, acting as cheerleaders for the military-industrial complex and propagandists for the government.

Williams’ sad attempt to inject himself into the fabric of the violence is getting more ink and airplay than the non-existence of WMD did back in the early-to-mid 2000s: a lie that provided the justification for a military action that has taken the lives of hundreds of thousands of Iraqi civilians.

The current focus on an inane untruth told by one celebrity news anchor has overshadowed the bigger picture about the US media and Iraq.

The lie about William’s getting shot down reinforced several ideas and narratives.

1) Iraq is a scary place and needs control. Reporters need to be embedded with “the troops” for their own protection. The green zone briefing tent gives the media what they need to know. Shorthand for staying put? “Remember what happened to Brian Williams.”

2) We need to fight these people, they are fighting us.

“They aren’t throwing flowers and sweets at us you peace-loving hippies! They SHOT AT BRIAN WILLIAMS! Of COURSE we had to kill everyone in the area!”

3) People with “skin in the game” sell the war better. Some in the military knew it was a lie, but why spoil Williams’ great story? “Let the baby have his bottle.”

Getting the perspectives of the poor innocent Iraqis is boring and makes people at home feel bad. I’m falling asleep just typing that sentence.

5) The biggest relate-able celebrity is always used to pitch the story. Want to tell a story about the massive tsunami in another country? Tell the story of the white supermodel caught in it.

6) Use the “missing white woman” story for war. The decision by NBC and Williams to co-opt a real person’s experience was useful to get the public’s attention and empathy using someone they could relate to.

NBC and Williams might even have justified the lie saying it was representative of others’ real story that wouldn’t get covered without celebrity.

Clearly this story could have been corrected many times in the past, but think about who would have had to do it and what they risked doing it earlier. Then think about how we can force earlier corrections.

Both the military brass and the NBC brass contributed to this “mistake.”

Say you were there, either in Williams’ helicopter or the one actually forced down. When you see the story you go to your commanding officer and say, “That’s NOT what happened!” The officer thinks, “Does correcting this help or hurt our relationship with the media? Does it change the public’s perception of what is happening here?”

If the officer calls out Williams and asks for change what happens? Awkward! Maybe the officer just lets it slide and tells the solider to not bring it up since it’s true in general for people in some choppers, just not specifically for Williams.

Here’s the deal, the military media contacts aren’t the truth police, they aren’t NBC fact checkers. It’s not their job to get the media’s facts right. On the other hand, if the story made them look bad they would demand the truth, or negotiate some kind of deal. “We won’t tell anyone about your little fib, don’t tell anyone about our big lies.”

Say you were a cameraman on the chopper with Williams and knew the story was BS. You tell the producer who thinks, does correcting this “mistake” help or hurt the story to the American public? What about NBC’s and Williams’ credibility?

How will the NBC brass feel finding out that the “brave reporter” story they have been hyping is a lie? Remember, NBC is the network who fired a top-rated money-making show because they didn’t want to be seen as anti-war.

Of course smart people might ask, “Hey, if they made up stuff about the last war, might they be doing the same now with ISIS?” Shut up. Shut up. Shut up! I can’t believe you aren’t shutting up already!

Getting swept up in a pro-war narrative doesn’t just happen. It takes a lot of people who encourage it and keep it going. We will need narrative busters for current and future wars. People who can tell the truth and help thwart a easily lead media.

Finally, Williams’ lie wasn’t a mistake for the pro-war forces, it was a valuable gift, worth 100’s of millions of dollars given by NBC to military contractors (one of whom, GE, was its parent at the time).

(NBC is over-the-top in glorifying war.)

Glenn Greenwald pointed out in 2008 that Williams is an establishment hack:

Brian Williams, Charlie Gibson and company are paid to play the role of TV reporters but, in reality, are mere television emcees — far more akin to circus ringleaders than journalists. It’s just as simple as that. David Halberstam pointed that out some time ago. Unlike Yellin, Donahue and Banfield, nobody needed to pressure the likes of Williams, Gibson and Russert to serve as propaganda handmaidens for the White House. It’s what they do quite eagerly on their own, which is precisely why they’re in the corporate positions they’re in.

Greenwald said of Williams in 2012:

Brian Williams doesn’t occupy the position he occupies — as America’s Most Serious and Visible News Anchor — despite his vapid glorification of American political and military leaders; he occupies it precisely because he’s so good at doing that. That’s the prime requirement of this job.

(FAIR provides a humorous example of Williams’ pro-war cheerleading: “Despite what Williams claimed … the invasion [of Iraq] did not actually spark a wave of democratization in the Middle East that made ‘even the harshest critics of President Bush…admit maybe he’s right about freedom’s march around the globe.’ “)

Greenwald also tears into Williams for pushing propaganda on Iran, and interviewing paid defense analysts without revealing their financial incentives.

And Justin Raimondo lambasts Williams as a shill:

Williams was a reliable foot soldier in the neocons’ war on truth.

“No one in their right mind, [Williams] believed, would want America to pull out tomorrow. He did not want America to withdraw from Iraq.” Of course he didn’t: he and the rest of the flag lapel pin-wearing “mainstream” media had too much invested in the War Party’s success.

The Williams record in covering up the sickening horrors wreaked by the US military in its never-ending campaign to re-order the world to Washington’s liking goes way back. When NATO jet fighters bombed a passenger train in Serbia – by “mistake” – killing a dozen and wounding dozens more, Williams intoned that visuals of the train attack “are so graphic that we cannot show them on television for fear of upsetting viewers.”

Hear no evil, see no evil, speak no evil – that’s how the trained monkeys of our “mainstream” media treat the depredations of US imperialism: there’s no need to “upset” the delicate sensibilities of Americans, who might be disabused of their rulers’ beneficence. Better to view these crimes through the Vaseline-covered lens of a committed shill. Williams isn’t a reporter: he’s a cosmetician, whose job it is to prettify the ugly truth.

In 2003, as the neocons were crowing that the war they’d spent the last decade ginning up was a triumph, Williams was joining the chorus:

“They are calling this the cleanest war in all of military history. They stress they’re fighting a regime and not the people, using smart bombs, not dumb, older munitions. But there have been and will be accidents.”

By the end of it, hundreds of thousands of Iraqi civilians had been slaughtered – by “accident,” no doubt.

Not content to cheerlead from the sidelines, Williams played the role of a scout eagerly pointing out potential targets:

“… And there’s a new weapon in this war: Arab media, especially al-Jazeera. It’s on all the time, and unlike American media, it hardly reflects the Pentagon line. Its critics say it accentuates civilian casualties and provokes outrage on the Arab street.”

A week later a US missile struck a generator at Al Jazeera’s Baghdad office, killing one reporter and wounding another.

The man, in short, is a confirmed liar – but the confirmation took place years before being caught out in this latest prevarication.

A CIA operative told Washington Post editor Philip Graham … in a conversation about the willingness of journalists to peddle CIA propaganda and cover stories:

You could get a journalist cheaper than a good call girl, for a couple hundred dollars a month.