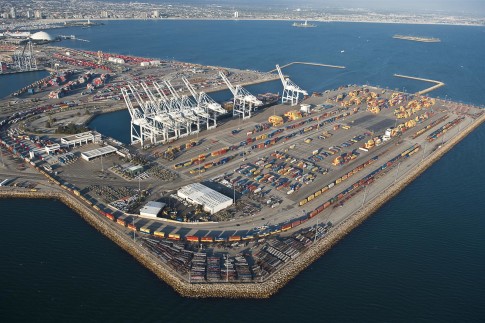 For those who have been following the recent ISM reports, one of the recurring concerns of respondents in both the manufacturing and service sector has been the congestion at West Coast Ports – which handled 43.5% of containerized cargo in the U.S and where transiting cargo accounted for 12.5% of US GDP – as a result of reduced work output by the local unions who have been more focused in recent weeks on ongoing wage hike negotiations.

And according to the latest update from the 29 west coast ports that serve as the entry point of the bulk of Asia/Pac trade into and out of the US, things are about to get far worse for America’s manufacturing base, because as RILA reported earlier, talks between the Pacific Maritime Association (PMA) representing port management, and the International Longshore and Warehouse Union (ILWU) officially broke down on Wednesday, and without an agreement, experts have suggested that nearly 30 west coast ports could be shut down within a week.

As RILA reports, “a work slowdown during contract negotiations over the past seven months has already created logistic nightmares for American exporters, manufacturers and retailers dependent on an efficient supply chain. A complete shutdown would be catastrophic, with hundreds of thousands of jobs at risk if America’s supply chain grinds to a halt.”

“A west coast port shutdown would be an economic disaster,” said Kelly Kolb, vice president of government affairs for the Retail Industry Leaders Association. “A shutdown would not only impact the hundreds of thousands of jobs working directly in America’s transportation supply chain, but the reality is the entire economy would be impacted as exports sit on docks and imports sit in the harbor waiting for manufacturers to build products and retailers to stock shelves.

“The slowdown is already making life difficult, but a shutdown could derail the economy completely,” said Kolb. “For retailers specifically, a shutdown will have dire consequences for those dependent on spring inventory demand.”

The last prolonged port shutdown of the West Coast ports was the 10-day lockout in 2002 which was estimated to cost the U.S. economy close to $1 billion a day.

“A port shutdown of even a short duration could derail economic growth and cause long-lasting damage and job losses across the country,” said Kolb. “There needs to be a greater sense of urgency at the White House, before it’s too late.”

One can see why the US retail association is concerned. So will there be a strike? Here is Bloomberg’s take:

Union-led work slowdowns could halt the 29 U.S. West Coast ports in five to 10 days, the head of the shippers’ association said, urging the union to accept a new offer that includes 3 percent raises. James McKenna, the president of the Pacific Maritime Association, said backups and delays at many of the ports are harming farmers, manufacturers and consumers as the flow of goods approaches a “coast-wide meltdown.” He called on the International Longshore and Warehouse Union to accept management’s second formal contract proposal since negotiations began last May.

“We’re not considering a lockout,” McKenna said on a conference call with reporters, his first public comments since the talks began. “What I’m really saying is that this system will bring it to a stop. Once that happens, we really don’t have a choice.”

Which is like the ECB saying “we don’t really want Greece out, but we will halt their liquidity. Once that happens, Greece doesn’t really have a choice.”

Here are the port workers’ demands:

The association of shipping lines, terminal operators and stevedores made public details of its contract offer, including 3 percent annual raises over five years, retaining employer-paid health care, and raising pensions by 11 percent. The average dockworker now makes $147,000 a year in salary, plus $35,000 a year in employer-paid health care and an annual pension of $80,000, according to an association press release.

And while there hasn’t been a formal lock out yet, the reality is that the workers have made their displeasure felt loud and clear:

McKenna blamed the union for work slowdowns that have contributed to congestion at the largest West Coast ports, including Los Angeles, Long Beach, Oakland, Seattle and Tacoma. Twenty-two ships were queued up Wednesday at the harbor shared by the Los Angeles and Long Beach ports, up from as few as four in mid-December, according to the Marine Exchange of Southern California, in one measure of the backups confronting shippers.

Since early November, the longshore union has been dispatching fewer crane operators in Los Angeles and Long Beach and slowing cargo movement in Oakland, Seattle and Tacoma, according to a Feb. 3 maritime association presentation. McKenna said productivity at many ports is down by as much as half, suggesting that cargo movement “will collapse under its own weight.”

Some of the impacts of the already experienced slowdown has included keeping U.S.-raised Christmas trees from reaching consumers in Asia, depriving McDonald’s customers in Japan of french fries, and stranded shipments of Mardi Gras beads bound for New Orleans.

Should talks fall apart, it probably will not be the end of the world: a nearly identical situation developed one decade ago leading to a 10 day lock down and which ended up costing the US economy $10 billion per day:

In the conference call, McKenna said the two sides remain at odds over wages, pensions, the duration of the contract and arbitration for workplace disputes. He said the sides are “far apart” on some issues and nearing agreement on others.

A 20-day lockout now would cost more than $2 billion a day, the association said in a report last year, including losses to railroads, ocean carriers and the broader economy.

Which incidentally, in an economy that is desperate for any “one-time, non-recurring” item to explain what is now global secular stagnation and economic slowdown, an excuse such as a port strike, or a harsh winter, or a strong dollar, or plunging crude, may be precisely the scapegoat that the central-planning doctor ordered.