Just what the market had hoped would not happen…

What this means simply is that since Greek banks are now unable to pledge Greek bonds as collateral and fund themselves, and liquidity is about to evaporate, the ECB has effectively just given a green light for Greek bank runs, as suddenly it has removed, both mathematically but worse politically, a key support pillar from underneath the already bailed out Greek banking system, (or merely a negotiating move to let Greece see just what kind of chaos this will create ahead of the big D-Day on Feb 25th when ELA could be withdrawn).

And now finally, after many years of investing in ECB repo collateral, pardon Greek debt, Greek banks finally will ask what the “fundamental” value of all that Greek government debt they bought really is. Judging by the Greek ETF’s reaction, the answer is lower. 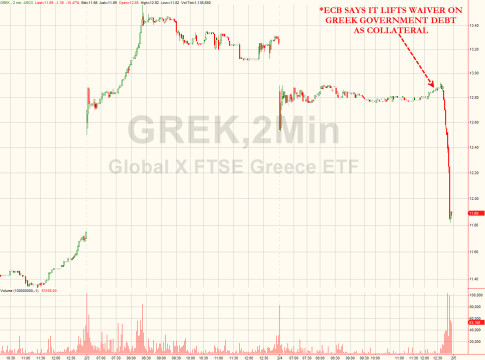 The only question now is whether the Greek Central Bank, which the ECB said is now sufficient to meet bank liquidity needs (via the ELA which the ECB has not yanked… yet: it has given Greece until February 28 before this final prop is yanked and Greece is left to drown), is allowed to print Euros. If not, the Greek experiment at trying to stick it to Europe is about to crash and burn spectacularly.

Joking aside, what is really at stake now, if only for Greece, is everything: Syriza either folds, and cedes by withdrawing all demands, thus effectively ending its mandate less than 2 weeks after coming to power, or it exits the Eurozone.

Suspension is in line with existing Eurosystem rules, since it is currently not possible to assume a successful conclusion of the programme review

Suspension has no impact on counterparty status of Greek financial institutions

Liquidity needs of affected Eurosystem counterparties can be satisfied by the relevant national central bank, in line with Eurosystem rules

The Governing Council of the European Central Bank (ECB) today decided to lift the waiver affecting marketable debt instruments issued or fully guaranteed by the Hellenic Republic. The waiver allowed these instruments to be used in Eurosystem monetary policy operations despite the fact that they did not fulfil minimum credit rating requirements. The Governing Council decision is based on the fact that it is currently not possible to assume a successful conclusion of the programme review and is in line with existing Eurosystem rules.

This decision does not bear consequences for the counterparty status of Greek financial institutions in monetary policy operations. Liquidity needs of Eurosystem counterparties, for counterparties that do not have sufficient alternative collateral, can be satisfied by the relevant national central bank, by means of emergency liquidity assistance (ELA) within the existing Eurosystem rules.

The instruments in question will cease to be eligible as collateral as of the maturity of the current main refinancing operation (11 February 2015).

In short: there is about 1 week before a key liquidity support of the Greek financial system is yanked.

Here is The Greek Government’s response…

This decision does not reflect any negative developments in the financial sector of the country and comes after two days of substantial stabilization . According to her the European Central Bank ( ECB ) , the Greek banking system remains adequately capitalized and fully protected through access to the EIA .

The European Central Bank ( ECB ) , taking and announcing this decision puts pressure on the Eurogroup to proceed rapidly to conclude a new mutually beneficial agreement between Greece and its partners.

The government daily widens the circle of consultation with partners and institutions to which they belong , remains at the target social salvation program approved by the vote of the Greek people , and consult with a view to drawing up European policy that will finally end the hitherto self-reinforcing crisis of Greek social economy .

Draghi tells Tsipras “don’t worry, it’s ok: you still have ELA… which we will pull on Feb 28 unless you agree to our terms”