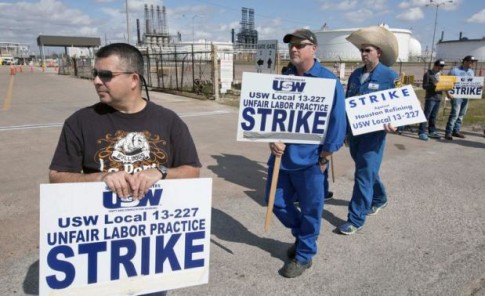 It’s not exactly the same as if Wall Street were to unionize and demand higher wages, but when US energy workers – supposedly the best paid profession away from those who BTFD or BTFATH for a living – go on strike, it is time to pay attention, which is precisely what happened yesterday afternoon, when US union leaders launched a large-scale strike at nine refineries after failing to agree on a new national contract with major oil companies. It marks the first nationwide walkout since 1980 and impacts plants that together account for more than 10% of US refining capacity. The United Steelworkers Union (USW) began the strike on Sunday, after their current contract expired and no deal was reached despite five proposals.

As quoted by the BBC, USW International Vice President of Administration Tom Conway said in a statement that it “had no choice. This industry is the richest in the world and can afford to make the changes we offered in bargaining,”

Of course this is precisely what Saudi Arabia was hoping for, because unless crude prices soar, these “rich” energy companies will have no choice but to engage in pink-slipping many of these workers in the coming months, leading to a permanent mothballing of numerous facilities around the US, which in turn will dramatically reduce supply, finally leading to an organic increase in oil prices. Just as the Saudis had envisioned, however at a cost of hundreds of thousands of best-paid US jobs.

“The problem is that oil companies are too greedy to make a positive change in the workplace and they continue to value production and profit over health and safety, workers and the community.”

The move comes at a tough time for oil companies, which have been cutting costs and reining in spending following a collapse in crude prices.

A large part of this is due to an increase in oil volumes extracted from shale formations, adding to a global supply glut.

USW said it represents workers at 65 US refineries that produce approximately 64% of the oil in the US.

The union has been renegotiating a three-year national contract since 21 January. The latest offer was the fifth proposal rejected by the union.

It wants to double the size of the annual pay increases from the previous agreement, increased healthcare coverage and reduced use of non-union contract workers.

Good luck with those wage hike demands at a time when the majors are crushing executive management by halting stock buybacks.

Here are some more details on the strike from Bloomberg:

Combined capacity for 7 refineries listed above ~1.8m b/d, or ~10% of U.S. operable capacity, according to data compiled by Bloomberg

More U.S. refineries standing by to join those already on strike

Expect more sudden and dramatic short squeeze in oil today as this information trickles down through the momentum-igniting algos that, much more than actual supply and demand, determine the price of the black gold.