– When FDR made gold illegal to own for everyday people – At the point of a gun (A short video) (AgainstCronyCapitalism, Jan 29, 2015): 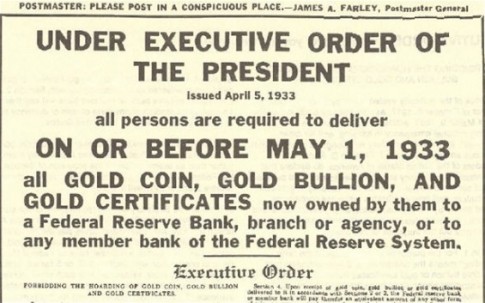 FDR, the man who studied Mussolini, who birthed the current intrusive state, who started the drug war in earnest, who put Japanese Americans into concentration camps, who extended the Depression years longer than it needed to be and thereby contributed to the genesis of the Second World War, who tried to pack the Supreme Court, who gave away half of Europe to the Soviets at Yalta,  and who confiscated the gold – the real wealth – of the American people.

What a guy. And he still has his face on the dime.

There is a reason why my grandmother, a good New York City Irish catholic despised the man. She thought Roosevelt was a hair’s breadth short of being a dictator.

She was probably being nice.