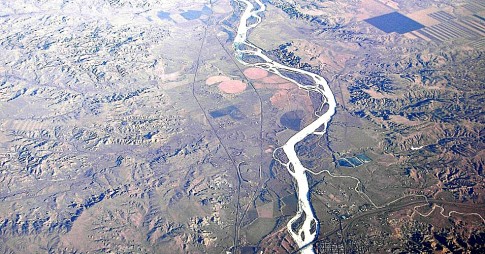 The cancer-causing chemical benzene has been detected in the drinking water supply of a Montana town after a pipeline ruptured on Saturday, sending up to 50,000 gallons of Bakken shale crude oil into the partially-frozen Yellowstone River.

The second Yellowstone River pipeline spill in less than four years, the environmental disaster has raised alarm among nearby residents, some of whom say they can smell oil in the air, according to a statement from the Northern Plains Resource Council.

Dena Hoff, whose land borders the River and is crossed by the breached pipeline, told Common Dreams by phone, “The nasty truth is that pipelines leak and pipelines break. “It is a disaster for everyone and everybody downstream. Until we start valuing water more than we value oil, this is going to happen.”

The Centers for Disease Control and Prevention is calling for residents of Glendive, Montana, which has a population near 5,000 people, to avoid any ingestion of municipal water, because it has shown “an elevated level of volatile organic compounds, predominantly benzene,” according to the municipality.

The CDC finds, “Long-term exposure to high levels of benzene in the air can cause leukemia, cancer of the blood-forming organs.”

City officials are urging residents to use bottled water, which they have reportedly shipped in for public distribution.

The warning, however, comes two days after the spill took place and directly contradicts initial assurances from state officials on Sunday that there is no evidence of environmental or public health hazards.

Dawson County Disaster and Emergency Services officials say that, as early as Sunday, they received complaints of “odor in drinking water.”

According to a statement (pdf) released by Bridger Pipeline Co., which operates the Poplar Pipeline, the breach occurred approximately nine miles upstream from Glendive, Montana. The company claims that no more than 1,200 barrels, or 50,000 gallons, of crude oil were released and stated that an “unknown amount of that total has spilled into the Yellowstone River.” It is not clear whether this estimate has been independently verified.

Furthermore, there are reports that the spill has quickly spread, including from the Environmental Protection Agency, which says that oil has been spotted near the town of Sidney, Montana, nearly 60 river miles from Glendive.

In July 2011, a breach of an ExxonMobil Corp. pipeline near Laurel, Montana unleashed at least 63,000 gallons of oil into the same river. State and federal officials are still seeking millions of dollars in damages from Exxon, including resources to conduct studies on the long-term impact of the environmental disaster.

Some of the people impacted by the spill are slated to have the controversial Keystone XL pipeline pass through or near their property, if it is approved. According to a statement from the Northern Plains Resource Council, this latest spill raises concerns about risks posed by more pipelines.

“People have to understand it is not just the impact of the person next to the spill; it impacts everyone and everything downstream for a long time,” explained Hoff, who is a member of the NPRC and says she is concerned about plans to build the controversial Keystone XL pipeline upstream from her property.

“The whole question is, should we continue to be having pipelines under aquifers and under surface water?” she added. “It is not a good idea and not safe. There is no fail-safe pipeline.”