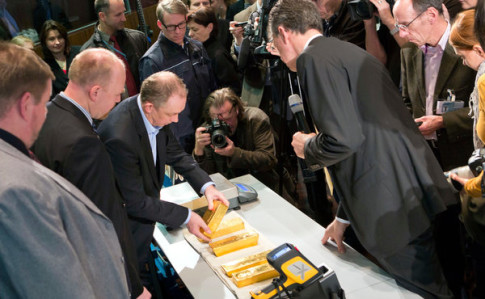 Three weeks ago, when looking at the latest NY Fed data of foreign gold held at the largest central bank gold vault in the world, we showed that in the month of November not only was a near record amount of gold withdrawn from the NY Fed, which at 42 tons was the single biggest monthly outflow at the NY Fed in over a decade… 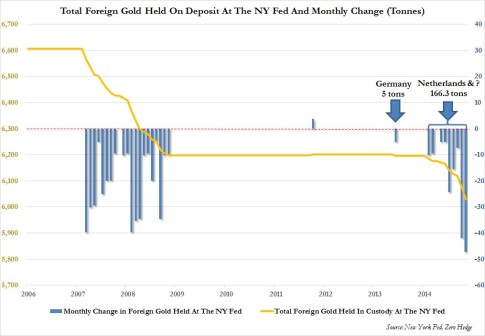 … but that though the end of November, all of the Netherlands’ 122 tons of gold withdrawals had been fully accounted for. This brought up an interesting question:

“… net of the Netherlands withdrawals, there is some 44 tons of extra gold that has been also quietly redeemed (by another entity). The question is who: is it now the turn of Austria to reveal in a few weeks that it too, secretly, withdrew some 40+ tons of gold from “safe keeping” in the US? Or was it Belgium? Or did the Dutch simply decide to haul back some more. Or did Germany finally get over its “logistical complications” which prevented it from transporting more than just a laughable 5 tons in 2013? And most importantly, did Germany finally grow a pair and decide not to let “diplomatic difficulties” stand between it and its gold?

We now know the answer, and it was, indeed, the latter with confirmation coming from the Bundesbank itself. As the German Central Bank announced earlier today, after withdrawing an embarrassing 5 tonnes of gold from New York in 2013, its rate of repatriation soared, and in what appears to have been just the past two months, has transferred a whopping 85 tonnes of gold from 80 feet below street level at Liberty 33 back to Frankfurt!

The Bundesbank successfully continued and further stepped up its transfers of gold last year. In 2014, 120 tonnes of gold were transferred to Frankfurt am Main from storage locations abroad: 35 tonnes from Paris and 85 tonnes from New York. “Implementation of our new gold storage plan is proceeding smoothly. Operations are running very much according to schedule,” said Carl-Ludwig Thiele, Member of the Executive Board of the Deutsche Bundesbank.

The Bundesbank took advantage of the transfer from New York to have roughly 50 tonnes of gold melted down and recast according to the London Good Delivery standard, today’s internationally recognised standard. “We also called on the expertise of the Bank for International Settlements for the spot checks that had to be carried out. As expected, there were no irregularities,” said Mr Thiele.

According to its new gold storage plan, unveiled in January 2013, the Bundesbank will be storing half of Germany’s gold reserves in its own vaults from 2020 onwards. This necessitates a phased transfer to Frankfurt am Main of 300 tonnes of gold from New York and all 374 tonnes of gold from Paris.

Since the transfers began in 2013, the Bank has relocated a total of 157 tonnes of gold to Frankfurt am Main – 67 tonnes from Paris and 90 tonnes from New York. This is equivalent to roughly 23% of the total quantity to be transferred. The following table gives an overview of the gold that has been transferred to date. 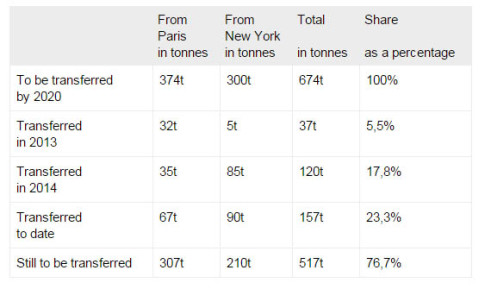 As at 31 December 2014, the Bundesbank’s gold reserves were stored at the following locations.

The Bundesbank assures the identity and authenticity of German gold reserves throughout the transfer process – from when they are removed from warehouses abroad until they are stored in Frankfurt am Main. As soon as the gold was removed from the warehouse locations abroad, Bundesbank employees cross-checked the lists of bars belonging to the Bundesbank against the information on the bars removed. Finally, once they arrived in Frankfurt am Main, all the transferred gold bars were thoroughly and exhaustively inspected and verified by the Bundesbank. When all the inspections had been concluded, no irregularities came to light with regard to the authenticity, fineness and weight of the bars.

A curious amount of precautions and safeguards when transporting the “safe” and “untainted” gold held at the NY Fed to Frankfurt. Almost as if the Bundesbank, gasp, did not trust the quality and content of the NY Fed-held gold, nor its well-meaning intentions.

Ironically, it was exactly one year ago that we wrote “Germany Has Recovered A Paltry 5 Tons Of Gold From The NY Fed After One Year” in which we wrote:

The official explanation was as follows: “The Bundesbank explained [the low amount of US gold] by saying that the transports from Paris are simpler and therefore were able to start quickly.” Additionally, the Bundesbank had the “support” of the BIS “which has organized more gold shifts already for other central banks and has appropriate experience – only after months of preparation and safety could transports start with truck and plane.” That would be the same BIS that in 2011 lent out a record 632 tons of gold…

Welt goes on to “debunk” various “conspiracy websites” that the reason why the gold is being melted is not to cover up some shortage (and to scrap serial numbers), but that the gold is exactly the same gold as before. Finally, to silences all skeptics, the Bundesbank says that “there is no reason for complaint – the weight and purity of the gold bars were consistent with the books match.” In conclusion, Welt reports that in 2014 “larger transport volumes” can be expected from New York: between 30 and 50 tons.

Welt was off by just 50% with the full 2014 repatriated amount hitting 85 tons in what appears to have been a year-end scramble following the Netherlands repatriation shocker. And, as it turns out, all it took for the Bundesbank to send its repatriation amounts surging is for the Dutch to show it how it is done: i.e., by plane because crossing the Atlantic with a Brinks’ truck full of gold certainly presents some “logisitcal challenges.”

Sarcasm aside, it is quite clear that “logistical difficulties” is merely a politically correct strawman. Recall the real reason for the paltry repatriation by Buba in 2013, as explained by Deutsche Bank two months ago:

… the gold community paid great attention to the decision of the German Bundesbank to “bring German gold home”. At the beginning of 2013, the Bundesbank announced it would repatriate 300 tonnes of gold stored in the US by 2020. It is well behind schedule, citing logistical difficulties. Yet diplomatic difficulties are more likely to be the chief cause of the delay, especially seeing as the Bundesbank has proven its capacity to organise large-scale gold transports. In the early 2000s, the Bundesbank incrementally repatriated 930 tonnes of German gold held by the Bank of England.

Which leads us to the only relevant question: now that the “diplomatic difficulties” have been overcome and the Bundesbank is back on track to repatriating precisely the right amount of gold from the NY Fed to indicate that it has far less faith in the US central bank than it did when it was barely conducting any transfers in 2013, just how worse as the diplomatic difficulties now? We expect to get at least a partial answer on Thursday when Mario Draghi finally announces his long-overdue €500 billion QE program, with Bundesbank’s Jens Weidmann, sitting quietly in a corner, and ignored by the ex-Goldman head of the ECB, contemplated just how much more, if not all, gold (there is still some 517 tonnes of gold left to be repatriated to Germany from NY and Paris) he should withdraw now in preparation for the “next steps”?

One thing is certain: Germany sends its kindest gratitude to Ukraine, whose gold, now long gone, is most likely to be found in a far safer, and remelted, state somewhere in the bowels under Wilhelm-Epstein-Straße, number 14 in Frankfurt am Main.