“As for Deutsche Bank’s response perhaps the simplest and most effective one would be for the Frankfurt megabank to tell the NY Fed that perhaps its own 150x leverage is just a little more worthy of attention.”

First it was French BNP that was punished with a $9 billion legal fee after France refused to cancel the Mistral warship shipment to Russia (which promptly led to French National Bank head Christian Noyer to warn that the days of the USD as a reserve currency are numbered), and now moments ago, none other than the 150x-levered NY Fed tapped Angela Merkel on the shoulder with a polite reminder to vote “Yes” on the next, “Level-3” round of Russia sanctions when it revealed, via the WSJ, that “Deutsche Bank’s giant U.S. operations suffer from a litany of serious problems, including shoddy financial reporting, inadequate auditing and oversight and weak technology systems.”

What could possibly go wrong? Well… this. Recall that as we have shown for two years in a row, Deutsche has a total derivative exposure that amounts to €55 trillion or just about $75 trillion. That’s a trillion with a T, and is about 100 times greater than the €522 billion in deposits the bank has. It is also 5x greater than the GDP of Europe and more or less the same as the GDP of… the world. 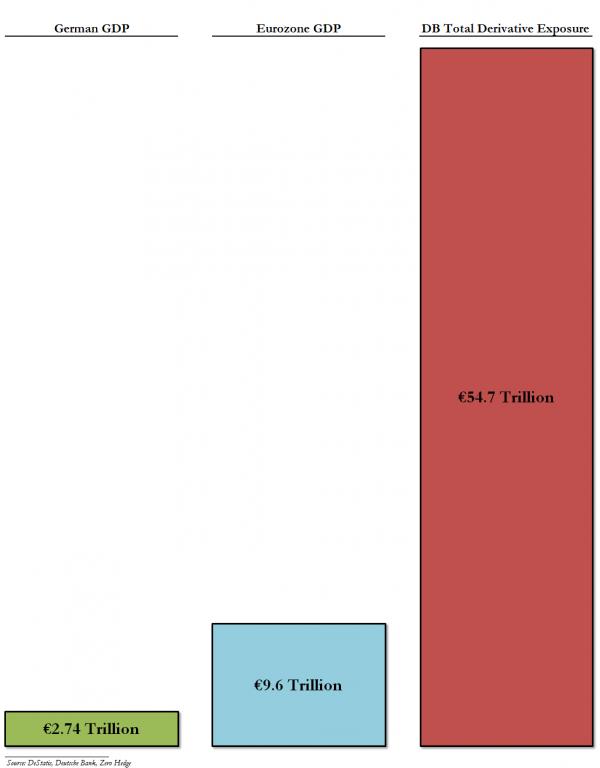 In a letter to Deutsche Bank executives last December, a senior official with the New York Fed wrote that financial reports produced by some of the bank’s U.S. arms “are of low quality, inaccurate and unreliable. The size and breadth of errors strongly suggest that the firm’s entire U.S. regulatory reporting structure requires wide-ranging remedial action.”

The criticism from the New York Fed represents a sharp rebuke to one of the world’s biggest banks, and it comes at a time when federal regulators say they are increasingly focused on the health of overseas lenders with substantial U.S. operations.

The Dec. 11 letter, excerpts of which were reviewed by the Journal, said Deutsche Bank had made “no progress” at fixing previously identified problems. It said examiners found “material errors and poor data integrity” in its U.S. entities’ public filings, which are used by regulators, economists and investors to evaluate its operations.

Deutsche Bank’s external auditor, KPMG LLP, also identified “deficiencies” in the way the bank’s U.S. entities were reporting financial data in 2013, according to a Deutsche Bank email reviewed by the Journal.

Oh wait, so those €55 trillion in derivatives are actually completely fabricated? Well if that doesn’t send the S&P 500 limit up nothing will.

DB’s response is the generic one already attempted by that other permacriminal bank, Barclays, which hired a few hundred compliance people after it was revealed that the British firm was manipulating and rigging pretty much every product and market it was involved in.

“We have been working diligently to further strengthen our systems and controls and are committed to being best in class,” a Deutsche Bank spokesman said Tuesday. As part of this, he said, the bank is spending €1 billion globally and appointing 1,300 people, including about 500 compliance, risk and technology employees in the U.S. Mr. Muccia declined to comment.

Sadly for now what this latest Pandora’s box means is that confidence in Europe’s insolvent banks just crashed with a bang once again, not that it would be reflected in the stock’s rigged price of course: rigged most likely by Deutsche Bank among other of course.

The New York Fed’s concerns also pose a challenge for Deutsche Bank’s longtime finance chief, Stefan Krause, who is ultimately responsible for the company’s financial figures and has been spearheading efforts to improve the quality of the bank’s reporting.

The concerns from regulators strike at the heart of an issue plaguing many of the world’s big banks: Some investors lack confidence in the integrity of their numbers. Such fears have been especially prevalent in Europe.

Then again, none of DB’s numbers actually matter: if the banks needs a bailout the Fed will promptly step in, and today’s advisory has one simple end point, which happens to be the same as the recent BNP $9 billion fine – don’t even dare to side with Putin over the US. Because you sure have big bank over there Germany… It would be a pity if the NY Fed i) revealed just how insolvent it truly was and ii) decided not to bail it out subsequently.

As for Deutsche Bank’s response perhaps the simplest and most effective one would be for the Frankfurt megabank to tell the NY Fed that perhaps its own 150x leverage is just a little more worthy of attention.

3 thoughts on “NY Fed Slams Deutsche Bank (And Its €55 Trillion In Derivatives): Accuses It Of ‘Significant Operational Risk’”