Dianne Feinstein:“I would say, ‘Putin, you have to man up. You should talk to the world. You should say, if this is a mistake, which I hope it was, say it.

And we know that because a few hours ago, the biggest Dutch newspaper,Telegraaf, openly asked for military intervention by NATO to protect MH 17 and calls Putin a “KGB liar.”

As I’ve said before, the elitists have WW3 planned for us. 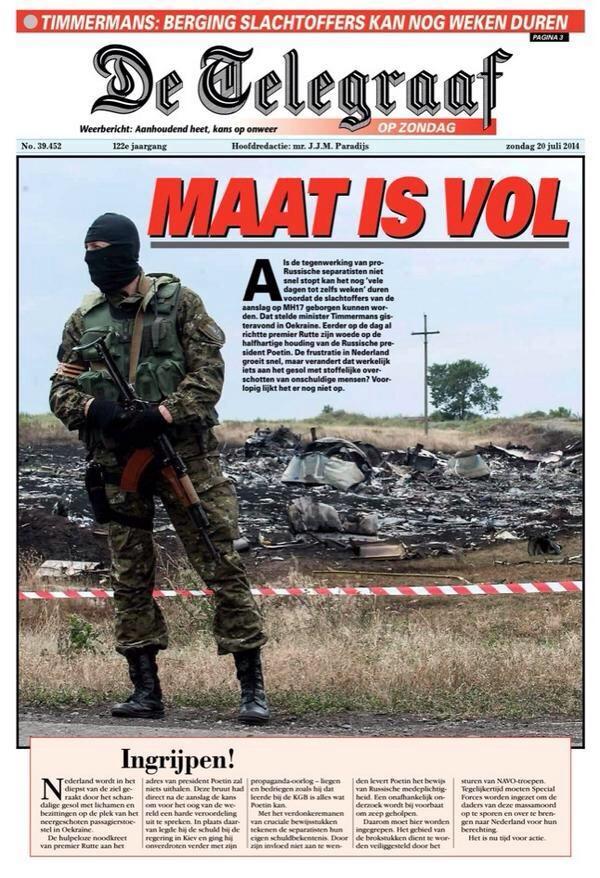 Shortly after we first reported about the MH-17 tragedy, we said that the key variable would be proving who the shooter was, as the grand fingerpointing theater was about to begin. We also noted that the actual answer to “who did it” was irrelevant, for the great propaganda machine had already made up its mind and was on overdrive. It promptly led to such ridiculous comments from non other than the Pentagon which said that, on one hand:

As expected, the narrative that the jet was shot down over Ukraine by Putin promptly became the go to version of the western media, and in the absence of actual facts, the appeal to emotions took over and quickly hit a fever pitch. Below is a sampling of some UK newspaper front pages. Clearly, facts be damned, the media knows all already.

In fact, one needs do nothing more than listen to that supreme “the NSA spying is good for you” demagogue, Dianne Feinstein, to know that the “west” is by now convinced the propaganda was has been won. To wit, from Telegraph:

Dianne Feinstein, chairman of the US Senate Intelligence Committee, has urged Russian President Vladimir Putin to “man up” and admit Russia made a mistake.

She told CNN: “I think this has become a huge human drama, and I think the nexus between Russia and the separatists has been established very clearly, so the issue is where is Putin?

“I would say, ‘Putin, you have to man up. You should talk to the world. You should say, if this is a mistake, which I hope it was, say it.

“I think the world has to rise up and say we’ve had enough of this.

“You cannot let this kind of thing happen, and Russia continues to prepare it for the next strike down of a civilian plane. There will be repercussions from this.”

But if the “facts” were so overwhelmingly against the separatists, why does it matter if Putin admits? After all it would surely assist the demonization campaign against Russia if the former KGB spy kept up his version of events.

So facts be damned, everyone in the west, from the most crony politician to the biggest tabloid has “undisputed” proof Putin did it. But what now: what is the endgame?

Once again the answer is simple: Western military intervention, this time in the conflict zone, under the guise of public anger against Putin, to reinforce the dwindling Ukraine army forces and to repel the separatists, in the process regaining the critical industrial regions of Ukraine which also are the location of vast natural gas deposits. Certainly showing to Gazprom just who was in charge of this key natural gas nexus wouldn’t hurt either. After all the west has already invested so much in the current Ukraine government, it can’t all be for nothing.

And we know that because a few hours ago, the biggest Dutch newspaper, Telegraaf, openly asked for military intervention by NATO to protect MH 17 and calls Putin a “KGB liar.”

So what happens next? Well, since no crisis should ever be put to waste (especially a crisis created by the same entities who end up benefiting the most from it) the big push over the next week will likely involve setting the stage for the Western arrival (led by NATO or some other grand Western alliance) to secure the MH-17 site, to repel the separatists, and to reinforce armed forces that, courtesy of extensive CIA intervention in recent months, are aligned with said “reinforcers”, all the while further provoking Putin and Russia, leading to even more sanctions and countersanctions.

To all those who see this as nothing but a deja vu of the Syrian fiasco scenario that unwound over the past two years with such unprecedented humiliation for the US State Depratment, you are not alone.

3 thoughts on “Biggest Dutch Daily Calls For NATO Intervention To Protect MH-17; Feinstein Tells Putin To ‘Man Up And Confess’”