– If This Keeps Up, They Will Have To Start Putting Armed Guards On Food Trucks (Economic Collapse, July 16, 2014):

The basic necessities in life just keep getting more expensive.  On Tuesday, Hershey announced that the price of all of their chocolate bars is going to go up by about 8 percent.  That is particularly distressing to me, because I am known to love chocolate.  But if it was just chocolate that was becoming significantly more expensive perhaps that would be okay.  Last month, it was coffee.  J.M. Smucker, one of the largest coffee producers in the United States, announced that it planned to raise coffee prices by about 9 percent.  And Starbucks has announced a bunch of price increases across the board on their coffee products.  Of course we could all survive without chocolate and coffee, but as you will see below just about every food category is becoming more expensive.  If this keeps up, could we eventually see armed guards in grocery stores and on food trucks?

On Wednesday, Robert Wenzel of the Economic Policy Journal shared some new data that has just been released by the federal government about food inflation over the past year.  Without a doubt, these numbers are quite startling…

According to the latest data released today by the Bureau of Labor Statistics, year-over-year gains in some food products at the producer level have been truly spectacular.

Fresh and dry vegetables are up 8.4%.

Unfortunately, paychecks for most American families are not going up at similar rates.

What that means is more pain when we make our trips to the grocery store.  Things have gotten so bad that even the mainstream media is running stories about this.  For example, this excerpt comes from a recent CNBC article…

“I try to do all my local errands in one day and go up to the mall,” said Helon Rapfogel of New Jersey. “I used to go maybe twice or three times a week, and now I just go one day a week, if that much. And I try to consolidate things.”

Rapfogel said that higher costs for food and gas are hitting her overall budget.

“You sacrifice things. Like not doing an ice cream run during the week with the kids. [That could] hurt the local retailers, and we don’t want to do that … but we may have to,” she said.

At the grocery store, meat, dairy and fruit prices are all up substantially. People are even paying more for lattes at their local coffee shops. And it’s not just food—gas prices have jumped sharply on geopolitical unrest, and at the moment there’s no relief in sight.

So why is all of this happening?

Well, the truth is that a lot of factors have combined to produce something of a perfect storm.

First of all, we should talk about Federal Reserve money printing.  Since the last financial crisis, the Fed has been on an unprecedented money printing spree.  This has dramatically pushed up the prices of stocks, commodities and just about everything else.  It was naive to think that we wouldn’t eventually see substantial food inflation as well.  Just look at what “quantitative easing” has done to M1 since the last recession… 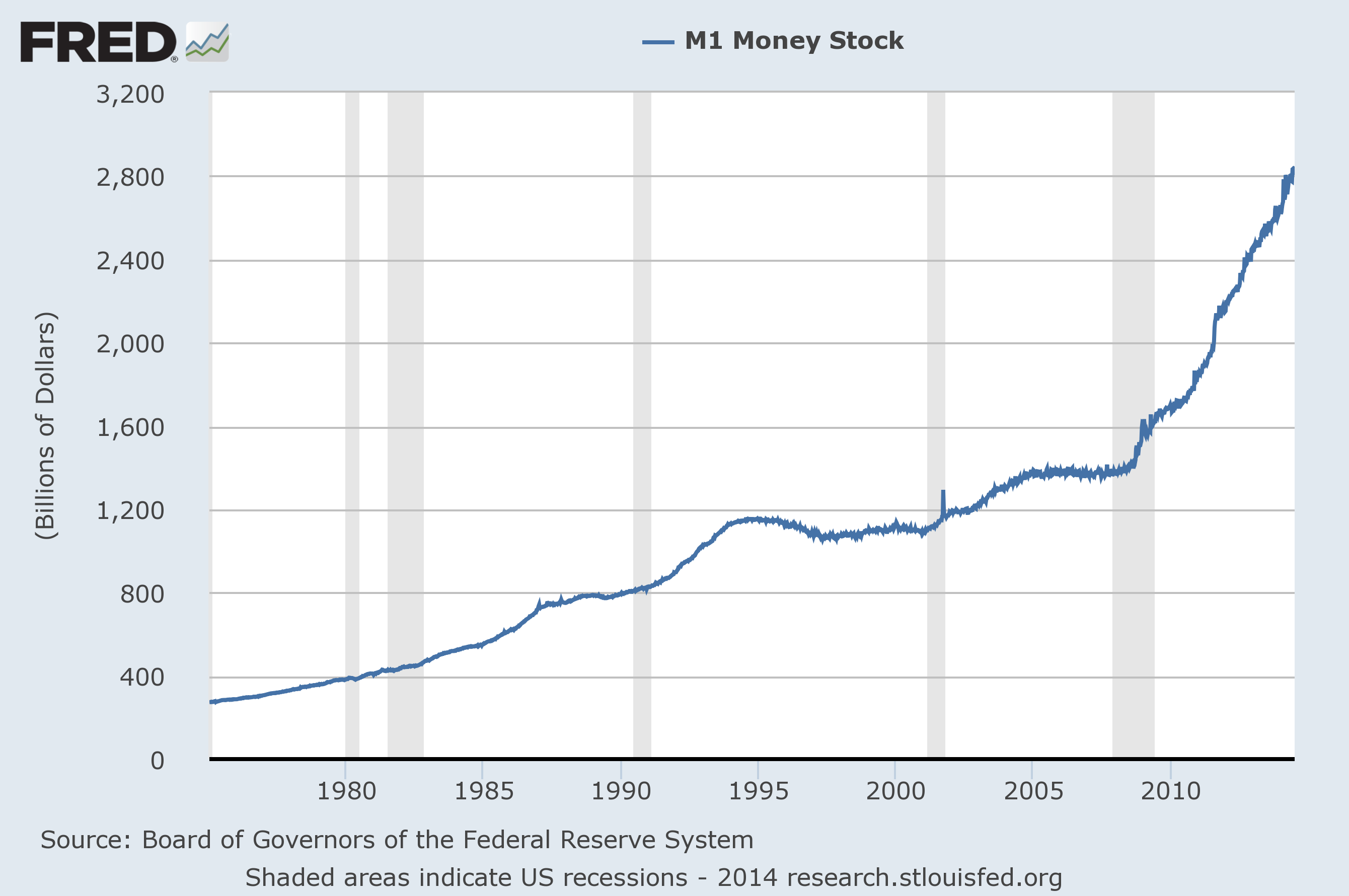 When you have more dollars chasing roughly the same amount of goods and services of course prices are going to go up.

It is just basic economics.

But according to Federal Reserve Chair Janet Yellen, there is absolutely no reason to be concerned.  The following is a video of her telling the press her view on inflation that I shared in a previous article…

But crazy Fed money printing is not the only reason why food prices are going up.The endless drought in the western half of the country is severely hurting food production as well.  The size of the U.S. cattle herd has shrunk for seven years in a row, and it is now the smallest that it has been since 1951.  And the drought is hitting the state of California particularly hard, and considering the fact that it produces nearly half of all of our fresh produce that is more than a little bit alarming.  Yes, we are more technologically advanced that we used to be, but we are not advanced enough to overcome an epic multi-year drought in half the nation.

In addition, we are also dealing with the worst pork virus to ever hit the United States right now.  Porcine epidemic diarrhea has already wiped out about 10 percent of the pig population in the U.S., and approximately 100,000 more are dying each week.  As you saw above, pork prices are already up 28 percent over the past 12 months, and if a solution is not found to this virus the price increases are going to get much worse.

Down in Florida, citrus growers are facing a horrific outbreak of citrus greening disease.  The U.S. Department of Agriculture says that orange production in the U.S. will be down 18 percent compared to last year, and it is expected that this will be the worst crop in close to 30 years.

Another plague known as the TR4 fungus has hit banana production.  According to CNBC, this horrible fungus may eventually completely wipe out the variety of bananas that we eat today…

Banana lovers take note: The world’s supply of the fruit is under attack from a fungus strain that could wipe out the popular variety that Americans eat.

“It’s a very serious situation,” said Randy Ploetz, a professor of plant pathology at the University of Florida who in 1989 originally discovered a strain of Panama disease, called TR4, that may be growing into a serious threat to U.S. supplies of the fruit and Latin American producers.

“There’s nothing at this point that really keeps the fungus from spreading,” he said in an interview with CNBC.

While there are nearly 1,000 varieties of bananas, the most popular is the Cavendish, which accounts for 45 percent of the fruit’s global crop—and the one Americans mostly find in their supermarkets.

For decades, Americans have been able to go to the grocery stores and fill up their carts with massive amounts of very inexpensive food.

But just because it has been that way for so many years does not mean that it will be that way in the future.

Right now, there are 49 million Americans that are dealing with food insecurity, and that number will only get worse as food prices go even higher.

It is getting to the point where it is not too hard to imagine desperate people holding up food trucks and robbing grocery stores in order to feed themselves and their families.

Let us hope that we don’t see anything like that any time soon, but we are moving in that direction.

Just a few years ago, the notion that we could ever see armed guards on food trucks or in grocery stores in the United States was absolutely unthinkable.

But now, it is not so crazy.

So what do you think?  Please feel free to share your thoughts by posting a comment below…

2 thoughts on “If This Keeps Up, They Will Have To Start Putting Armed Guards On Food Trucks”