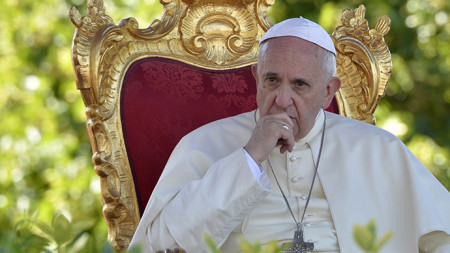 An Italian newspaper has quoted the Pope as saying that “about two percent” of Roman Catholic priests are pedophiles. The Pontiff allegedly said that child sex abuse is “a leprosy in our house” and promised solutions to priests’ enforced celibacy.

The article, published in the left-leaning La Republica, is a recollection of an hour long conversation between the Pope and one of Italy’s most respected journalists, Eugenio Scalfari, who is also the founder of the newspaper. Scalfari is an atheist who has written about several past meetings with Pope Francis.

“Many of my collaborators who fight with me [against pedophilia] reassure me with reliable statistics that say that the level of pedophilia in the church is at about two percent,” Pope Francis was quoted as saying.

The Pope also allegedly said that while most pedophilia happens in family situations, “even we have this leprosy in our house.”

He added that the requirement that priests take vows of celibacy is “a problem,” and that “there are solutions and I will find them.”

There are 414,000 Roman Catholic priests in the Church – which means that about 8,000 of them are pedophiles, if the Pope’s figure is correct.

Pope Francis’ estimate of two percent allegedly came from advisors. However, although statistics on pedophilia are often available in developed countries, information on the issue in the developing world is not as readily available.

The Vatican issued a statement reminding people that 90-year-old Scalfari has long conversations with public figures, but does not take notes or tape them. Instead, he reconstructs conversations from memory.

Vatican spokesman Father Federico said that while the article conveyed the “sense and the spirit” of the conversation, it was not an interview in the normal sense of the word and therefore could not be attributed to the Pope “with certainty.”

Lombardi said a quote that cardinals are among the abusers is not accurate, adding that La Republica is trying to “manipulate naive readers.”

Last week, the Pope held his first meeting with victims of sexual abuse from priests and told them that the Church must “weep and make reparation.” He also said there would be no tolerance for any abusers within the Church, and that bishops trying to cover anything up in their diocese would also be held accountable.

The Argentine Pope also took a swipe at the mafia. Pope Francis recently excommunicated all members of organized crime in Italy, which was met with resistance in some parts of the country.

“Unfortunately I know what they do, the crimes that are committed, the enormous economic interests that they control. But the mafia’s way of thinking escapes me,” he allegedly said.

1 thought on “Pope Francis: 2% Of Catholic Priests Are Pedophiles”