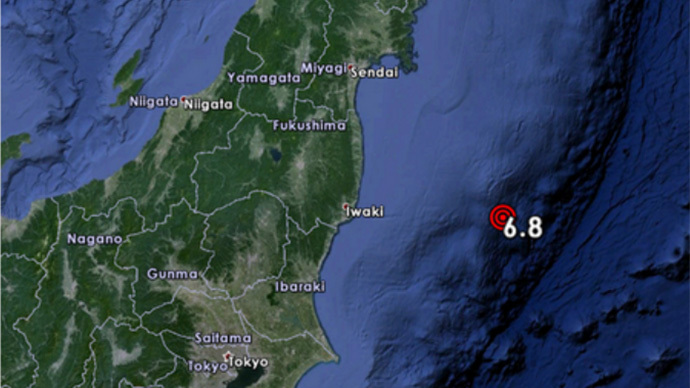 A 6.8 magnitude earthquake hit off the coast of Japan, with its epicenter located some 129 kilometers from the city of Namie in Fukishima prefecture, US Geological Survey reported.

The quake was centered at a depth of about 10km, according to the Japan Meteorological Agency (JMA).

Tsunami advisories were issued for Fukushima prefecture, as well as for nearby Iwate and Miyagi prefectures, but were lifted two hours later.

The quake triggered a small tsunami of up to 20 cm at Ishinomaki in Miyagi prefecture, and other locations in northeast Japan. No major damage was reported.

There were no reports of abnormalities at Fukushima-1 nuclear plant following the quake, TEPCO reported.

And since when is TEPCO trustworthy?

Would they tell us if reactor No.4 SFP has collapsed?