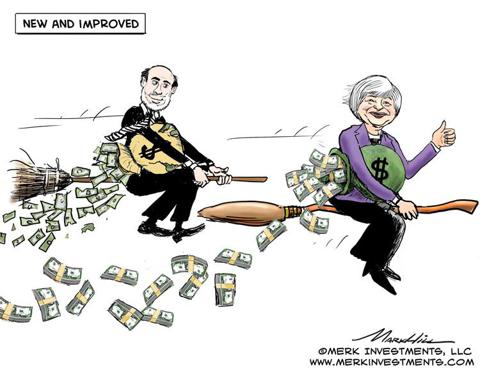 – Yellen Is Flat-Out Wrong: Financial Bubbles Are Caused By The Fed, Not The Market (ZeroHedge, July 5, 2014):

More of the same from Janet Yellen in her latest speech, but her focus on “resilience” caught my attention as it relates to very recent developments. The taper threat experience last year may have been a warning, but it doesn’t seem like it resonated with her or policymakers. The major bond selloff, which led to global ripples of crisis in credit, funding and currencies, was the opposite of flexibility. Perhaps a better definition of the word would be a place to start.

But her meaning was a bit different, in that it is clear (from this speech and prior assertions, wrong as they were, about the mid-2000’s housing bubble) she sees bubbles as “market” events in which the central bank’s role is primarily shock absorption. In other words, idiot investors wholly of their own accord create bubbles and it’s the job of the munificent and enlightened Federal Reserve to help ensure that such “market” madness is “contained” without further economic destruction.

At this point, it should be clear that I think efforts to build resilience in the financial system are critical to minimizing the chance of financial instability and the potential damage from it. This focus on resilience differs from much of the public discussion, which often concerns whether some particular asset class is experiencing a “bubble” and whether policymakers should attempt to pop the bubble. Because a resilient financial system can withstand unexpected developments, identification of bubbles is less critical.

The primary example she used is very illuminating in that regard, particularly as it relates to monetary neutrality.

Nonetheless, some macroprudential tools can be adjusted in a manner that may further enhance resilience as risks emerge. In addition, macroprudential tools can, in some cases, be targeted at areas of concern. For example, the new Basel III regulatory capital framework includes a countercyclical capital buffer, which may help build additional loss-absorbing capacity within the financial sector during periods of rapid credit creation while also leaning against emerging excesses.

This framework wholly reverses what happened in 2008, but since the FOMC as a whole, with her along for the ride, had absolutely no idea what was taking place at the time this is really not surprising. She sees the Fed as the cleanup crew for the “market’s” mess, essentially the job as it was described anyway a century ago, when in fact the 2008 panic was actually the market finally acting like a true market and exerting some pressure on the central banks to stop the ongoing and heavy inorganic and artificial intrusions. To maintain the idea of market-based mess is to be intentionally obtuse about the nature of interest rate targeting and central bank activism.

The only real question is whether she actually believes this or is dipping into the reservoir of expectations management. It is borderline facetious to suggest that “macroprudential” policy will have any real-time understanding of risks in a crisis (stress tests, really?), particularly since we have little conception of exactly how the “markets” have rebuilt themselves, intertwining leverage and correlation in new and fascinating ways, in the years since the FOMC blundered so badly the last time (with then out-of-date and similar macroprudential bluster). How do they even know how to accurately or even ballpark measure stresses in financials, such as interest rate swaps and other derivatives? I never once read anywhere that the FOMC made any connection between correlation anomalies in structured finance (negative convexity and correlation smiles) and the growing illiquidity of credit default swaps, but we are supposed to believe they will be on top of it next time?

But there is an almost cleverness to this that belies all their past mistakes; Yellen is claiming they are irrelevant going forward.  What she is trying to do is convince us all that “next time” none of it will matter because they are preparing all this “stuff” ahead of time.  In other words, there won’t be a cleanup because any “market” mistakes will have been mitigated before it ever happens – her idea of resiliency.  Does anyone actually buy that?  The lack of understanding of market behavior applies equally to the period before the crisis as it did during.

The only way any of this makes sense is if you buy the primordial orthodox premise that monetary policy is neutral in the long run (or even intermediately). Taking that line will lead you to believe asset bubbles are just markets gone insane of their own accord. Then again, Yellen has largely been hostile to “markets” since her academic career brought some notice, so this is really no surprise. But to experience, right now, the repo market collateral shortage and QE’s direct impact and to still blame markets for lack of resilience is either inordinate impudence or targeted public relations.

I cannot overstate this enough, the selloff last year was a desperate warning about the lack of resilience in credit and funding. That repo markets persist in that is, again, the opposite of the picture Janet Yellen is trying to clumsily fashion. Central banks cannot create that because their intrusion axiomatically alters the state of financial affairs, and they know this. It has always been the idea (“extend and pretend” among others) to do so with the expectation that economic growth would allow enough margin for error to go back and clean up these central bank alterations. That has never happened, and the modifications persist.

Resilience is the last word I would use to describe markets right now, with very recent history declaring as much.

1 thought on “Yellen Is Flat-Out Wrong: Financial Bubbles Are Caused By The Fed, Not The Market”