– Why Obamacare Is Pushing Up Health Insurance Premiums (ZeroHedge, July 6, 2014):

Now that Obamacare has been enacted, Americans across the nation are seeing their health insurance bills spiking, leading to what has been a documented slide in full-time hiring, a drop in consumer discretionary spending, not to mention stagnant and declining real wages. In short: a broad economic contraction (yes, yes, who could have possibly foreseen this).

But how is it that insurers set their prices? As Bloomberg explains, insurers are calculating what to charge for health plans in 2015, which is no simple task. Actuaries can’t easily forecast how often the millions of new Obamacare enrollees will go to a doctor. New federal rules and expensive drugs will also increase costs. Wrong guesses could wipe out profits.

Here is a quick and dirty way to understand why premiums are going up.

This one’s easy. Insurers know what they paid in claims for the previous year and use it as a basis for the year to come.

Past payouts are no longer a reliable predictor, though, especially with so many new Obamacare patients. And doctor visits will increase, because plans that didn’t cover maternity care and mental health must do so under the health-care law. That will bump up the premiums of some plans.

Actuaries adjust for what they call medical trend, or how fast the cost of care* is rising. From 2014 to 2015 it’s expected to rise as much as 6.8 percent. That includes changes in cost (the price of an MRI) and utilization (how many MRIs are performed).

* One tough thing to anticipate is how much new drugs will cost. Doctors are flocking to prescribe Sovaldi, a cure for hepatitis C with an $84,000 price tag. The drug cost UnitedHealth $100m in the first quarter of 2014—a sum the company called “a multiple of what we expected.”

Demographics help insurers estimate what it will cost to cover their customers. Older people typically need more care, and women of childbearing age are more expensive to insure than men*. These costs are built into plans.

* In some states, including Louisiana and Mississippi, enrollment on healthcare.gov by women accounted for almost 60% of sign-ups. That could drive up rates if insurers haven’t planned for it. 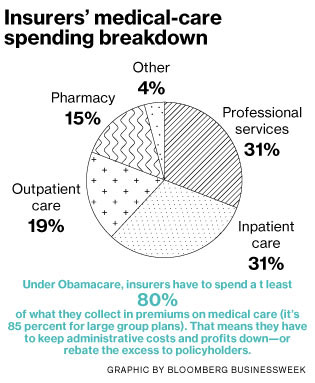 Health insurers can negotiate better rates from medical providers by promising to steer them more patients. They can also save money by avoiding expensive providers.

Insurers can vary premiums based on location. Medical care is more expensive in some rural areas where there are fewer doctors and in places with less competition.

Obamacare set aside $10 billion in 2014 to help insurers cover higher-than-expected claims in the law’s first year. That pool shrinks to $6 billion in 2015. Insurance companies will make up the difference by raising prices on some plans.

Insurers will pay $11.3 billion in fees in 2015 to fund Obamacare programs. That’s about 3 percent of premiums, up slightly from 2014.

Insurers plan for 3 percent to 5 percent profit. More uncertainty may prompt them to increase their risk load, a cushion against unexpected losses. 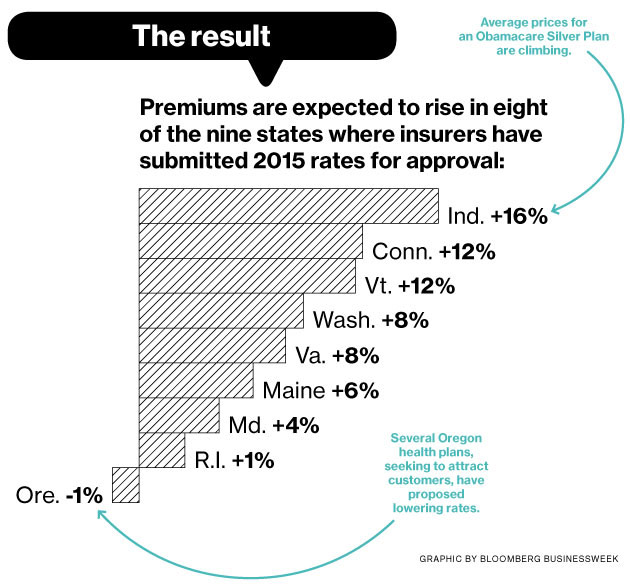 2 thoughts on “Why Obamacare Is Pushing Up Health Insurance Premiums”