– Apollo Astronaut: Climate Alarmism Is the ‘Biggest Fraud in the Field of Science’ (CNS News, July 2, 2014):

Climate alarmism is “the biggest fraud in the field of science” and the 97% consensus claim is nonsensical, Apollo 7 astronaut Walter Cunningham tells MRCTV in a preview of his presentation at the upcoming Heartland Institute climate conference, July 7-9.

“Since about 2000, I looked farther and farther into it,” Col. Cunningham (USMC, Ret.) tells MRCTV in an exclusive interview. “I found that not one of the claims that the alarmists were making out there had any bearings, whatsoever. And, so, it was kind of a no-brainer to come to the conclusion.”

Cunningham rejects the notion of man-made climate, not only as fact – but also as even qualifying as an actual “theory”:

“In the media, it was being called a theory. Obviously, they didn’t know what it means to be a theory.”

“If we go back to the warmist hypothesis – not a theory, but, a hypothesis – they’ve been saying from the very beginning that carbon dioxide levels are abnormally high, that higher levels of carbon dioxide are bad for humans, and they thought warmer temperatures are bad for our world, and they thought we were able to override natural forces to control the earth’s temperature. So, as I’ve looked into those, that’s the problem that I’ve found, because I didn’t find any of those to be correct – and, they certainly were not a theory, it was just their guess at what they wanted to see in the data they were looking at.”

Cunningham urges Americans to look at the data and decide for themselves, instead of taking anyone else’s word for it:

“You go out and take a look at it and you find out that a lot of it is pure nonsense and wishful thinking on the part of the alarmists who are looking for more and more money to fall into their hands.” 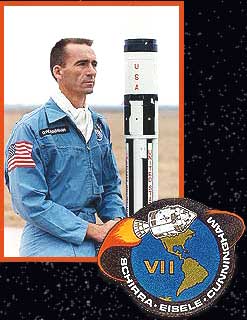 Cunningham notes that, while climate alarmists are concerned that the atmosphere currently contains 400 parts per million of CO2, that’s only a tenth of the level his spacecraft had to reach before causing concern. In his Apollo craft, an alarm would go off when CO2 reached 4,000 parts per million and, in today’s space shuttle, the trigger is 5,000. And, in submarines where crewmen may be on three-month missions, CO2 has to reach 8,000 parts per million before the alarm is activated.

“In one area after another, we find these people overly concerned about, one, the danger they’re trying to push on us and, secondly, the claim that we can somehow or other control the earth’s temperature by affecting it,” Cunningham says.

“I can’t say we don’t have any impact, at all, but it’d be so miniscule and so tiny, that it wouldn’t be worth any effort.”

So, what does dictate the Earth’s temperature? Cunningham says it’s well-established that “principle controllers” are natural forces like sun, ocean temperature, and even volcanic activity.

Thus, he calls climate alarmism “the biggest fraud in the field of science”:

“To me, it’s almost laughable, it’s the biggest fraud in the field of science, certainly in my lifetime, maybe the biggest one in centuries.”

“If you go back and you look at the data that has been well-documented over the years, you can look and see, for example, that right now both carbon dioxide and temperature are simultaneously at one of the lowest levels in at least the last 600-800 million years. The last time they were both together at this low a level, more or less, was 300 million years ago, and if you go back go back about 500-600 million years ago, carbon dioxide was 15 times higher than what it is now. So, what I’m getting at is this, the history shows you that most of this is just plain nonsensical today.”

“And, the amazing thing to people like me… is that there are people that believe the nonsense they’re being fed.”

The media are largely to blame for public misconceptions – not because they’re intentionally misleading the public, but because they “just don’t want to go into the time and trouble to find out.” “If they do go into it and look at it for themselves, they become a lot more neutral in their presentation,” he says.

Worst of all, Cunningham says, media are promoting the “nonsensical” claim that there’s scientific consensus accepting the hypothesis of man-made climate:

“When they’re out propagating this so-called 97% of scientists believe we’re controlling the temperature – I mean, that’s the most nonsensical, stupid number in the world – and all they have to do is do a little research on Google – I’m not going to do it for them – go in there and take a look and you find out that’s a ridiculous statement that people are making – and even the president makes a statement like that.”

“If you have a totally anonymous survey of real scientists involved in this field, I would almost guarantee you that you going to have a majority that are not going to agree with the alarmists.”

“I can only tell you that, even back in the days of Apollo, we didn’t have to face this kind of nonsense,” Cunningham concludes.

1 thought on “Apollo Astronaut: Climate Alarmism Is The ‘Biggest Fraud In The Field Of Science’”