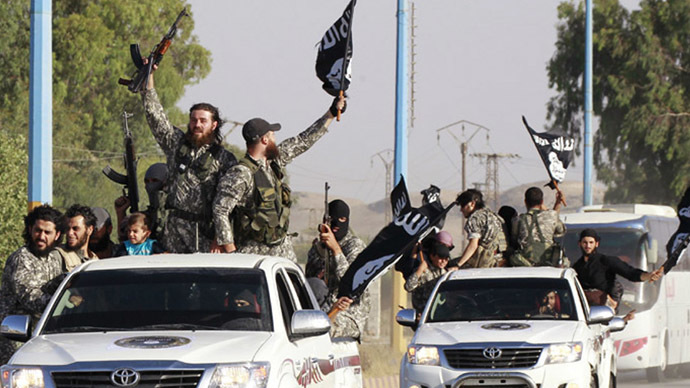 ISIS fighters have seized an oilfield on the Syria-Iraq border, snatching it from the control of rival militants. The Pentagon has said while it considers the Iraqi Army capable of defending Baghdad, outside aid may be required to repel the jihadists.

The UK-based Syrian Observatory for Human Rights reported that the key oil field in the Deir al-Zor province had fallen under the control of fighters from the Islamic State of Iraq and the Levant (ISIS) on Thursday.

“ISIS took control of the Al-Omar oil field,” located north of the strategic town of Mayadin, also under its control since dawn Thursday, said the Observatory.

The group cited an amateur video that was posted on YouTube purporting to show the capture of the oilfield. The footage shows a bearded man who is identified by the cameraman as Commander Hommam boasting that the field was taken without a single shot being fired.

“We took it [the oil field] over without any fighting. They fled like rats,” the commander said, referring to fighters from the Syrian opposition group al-Nusra who had previously been controlling the oilfield.

Al-Nusra Front had captured the oilfield from Syrian government forces in November and kept up with the production of oil at 10,000 barrels a day, according to the Observatory. The field itself has a maximum capacity of 75,000 barrels a day.

ISIS has gained significant ground in both Syria and Iraq and has declared the creation of an Islamic state, or caliphate, straddling both countries. The group has also issued a call to Muslims throughout the world to flock to their banner, vowing revenge for crimes committed against Muslims.

“Muslims everywhere, whoever is capable of performing hijrah [emigration] to the Islamic State, then let him do so, because hijrah to the land of Islam is obligatory,” said leader Abu Bakr al-Baghdadi on Monday, two days after the group rebranded itself as IS (Islamic State).

Iraq’s security forces have so far proved to be of little use in stemming the onslaught of the extremist group. ISIS continues to seize control of towns in Iraq, getting steadily closer to the capital of Baghdad. Prime Minister Nouri al-Maliki has appealed to Washington for help, but the American government has shied away of making any statements about the deployment of troops in the region.

On Thursday, US Defense Secretary Chuck Hagel and Army General Martin Dempsey said they believed the Iraqi army was capable of defending Baghdad. However they expressed doubts over whether they could push ISIS out of the country without external support. The two military heads said they were now considering what military role should be adopted by the US in this conflict.

The possibility of airstrikes and the deployment of 750 American military advisors is currently on the table, said Dempsey. The US government has urged Maliki to take steps to combat the sectarianism that has taken root in Iraq. The country’s Sunni and Kurd minorities claim they are discriminated against by the Shiite elite in Baghdad.