Update: just as expected, the confidence-preservation brigade is quick on the scene:

Because clearly marking loans to fair value would crush investor confidence. And clearly investors are dumb enough not to realize that it is precisely by hiding what is beneath the surface, that they have zero confidence in the system.

Ever since 2012, when we first revealed that the biggest problem plaguing Europe’s financial sector is the $2 trillion+ in bad debt on the books of European banks (not our numbers, the IMF’s), it became clear that the only way Europe can avoid a complete financial meltdown coupled with currency disintegration, is if it can constantly keep rolling over said bad debt (obviously the only way to do that would be to create an epic debt bubble leading managers of other people’s money to do idiotic things like buy Spanish debt at 2.75%). This is why not only the BOJ launched its mega QE in 2013, but why Draghi also kicked in with NIRP a month ago: the logic – do anything and everything to reflate the biggest credit bubble possible as otherwise European banks will have no choice but to face up to their trillions in bad loans.

Unfortunately for some banks, especially those which operate in Europe’s supposedly highest-rated country, Austria, sometimes just being able to kick the can is not enough as on occasion a law will change, having the unintended consequence of forcing the bank to admit just how ugly its balance sheet truly is. That’s what happened overnight when Erste Group, Austria’s largest bank by assets, and the third biggest bank in Eastern Europe after UniCredit and Raiffeisen, announced that, oops, its earlier forecast about the amount of bad loans on its books is wrong, and will have to rise by a massive 40%, leading to what will be a record $2.2 billion loss, and triggering writedowns.

Shareholders, not used to being told the truth and instead preferring sweet, little lies, promptly took the stock to the woodshed. 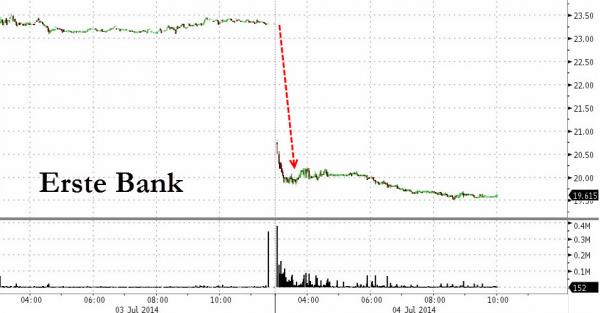 Analysts, whose job it is to predict these things, were shocked:”This is a clearly bad surprise as it comes in addition to the already ‘badly surprising’ warning issued by the group at the beginning of this year,” Natixis Securities SAS analyst Steven Gould said in a note to clients. “These announcements hurt the management’s credibility going forward.”

What was the catalyst for the early recognition of the massive writedown? Bloomberg explains:

The provisions are caused by new rules due to be approved by Parliament in Hungary today, forcing banks to refund “unfair” loan fees, and by the Romanian central bank’s push for faster bad-debt reduction amid the European Central Bank’s bank health check, Erste said. Writedowns on goodwill and deferred tax assets, triggered by the loan-loss provisions, may reach as much as 1 billion euros.

“By taking these measures, we have done everything in our power to avoid one-off effects from 2015 onward,” Chief Executive Officer Andreas Treichl said in the statement. “We are convinced that these measures will also help us pass the asset-quality review and stress test comfortably.”

Hungary contributed to Erste’s loss with a new law forcing it to repay some loan costs to customers. New rules due to be approved by Parliament in Budapest today will require banks to refund certain expenses on as much as 6.5 trillion forint ($28 billion) of loans going back as far as 10 years, according to the draft bill.

Higher bad-debt provisions in Romania, the Black Sea country of 20 million where Erste bought Banca Comerciala Romana SA for 3.75 billion euros in 2005, were caused by the central bank’s pressure on banks to clean up their balance sheets as part of the ECB’s bank health check, Erste said.

Ironically, it is the poor Eastern European sovereigns themselves who are forcing banks to do what is effectively is the job of their regulator, the ECB. Needless to say, the last thing the ECB will do is force banks to clean up their balance sheets: if anything Draghi knows full well that Erste is just the harbinger and Europe is loading to the brim with banks that are in the same situation. Should the ECB actually force banks to either revealt the true state of their bad debt and/or take measures to remedy it, the entire financial system would implode overnight.

Which is why instead we have an annual confidence building farce known as the “stress test”, which in the past has seen Bankia and Dexia pass with flying colors, and this year would have also given Erste an AAA+++ grade as well:

The loss won’t hit Erste’s regulatory capital to the full extent, and the bank’s common equity Tier 1 ratio will reach about 10 percent by the end of the year without raising fresh capital, Erste said. That’s because goodwill, brand value and other intangible assets of its Romanian unit that Erste is writing down aren’t part of the regulatory capital.

Which also goes to show just how ridiculous Europe’s definitions of capital truly are.

As for Erste, it’s ok – the stock has been punished and now it is time for the BTFD algos to lift it right back to where it was, because as has been made very clear in the past 6 years, fundamentals are no longer relevant or matter when making capital allocation decisions. The only thing that does matter is how much more of a moral hazard will the central banks push the system into before one day what happened to Erste today takes place at the global level, and the can containing the entire modern financial system which is broken beyond repair can no longer be kicked down the street.