And we are are losing about every 16 years another 2,5 cm.

(As a side note the Hunzas do NOT know hypertension, cancer arthritis, diabetes, tuberculosis, asthma, karies, presbyopia etc.)

We will have to (re-)learn to grow our food biologically or there will be no food at all.

Soil erosion also played probably an important role in the decline and collapse of the Egyptian and Greek empires.

Food prices are now skyrocketing across the USA, says the Bureau of Labor Statistics (BLS). Their most recent report (1) reveals that prices of meat, poultry, fish and eggs leaped 7.7 percent over the last year. That’s nearly 367% higher than the official 2.1% inflation rate claimed by the federal government. (2)

Prices on these food items have risen 664% in the last five decades, according to the BLS, but much of the price acceleration has happened in just the last few years… and there’s no end in sight.

While the federal government tries to blame rising food prices on global warming — because seemingly everything is now attributed to climate change, including depression and divorces — the far more sobering truth is that conventional agriculture is reaching a point of systemic, catastrophic failure.

The mass poisoning of agricultural lands with glyphosate, pesticides and chemical herbicides has resulted in the rise of aggressive “superweeds” that are taking over farms and causing productivity to plummet in many fields. As Nature.com now reports: (3)

Palmer pigweed can reach more than 2.5 meters tall, grow more than 6 centimeters a day, produce 600,000 seeds and has a tough, woody stem that can wreck farm equipment that tries to uproot it. It is also becoming more and more resistant to the popular herbicide glyphosate.

The solution to this, according to chemical herbicide manufacturers, is to start spraying fields with three, four or even FIVE herbicides all at the same time, “layering” different chemicals onto the resistant superweeds.

This approach is, of course, headed for catastrophe. Just as doctors have learned in the age of antibiotic-resistant superbugs, the more chemicals you use, the worse the resistance becomes. Before long, you’ve turned America’s farms into Frankenweed factories that churn out megatons of weeds, but less edible food.

Even Nature.com points out this fundamental truth, saying: 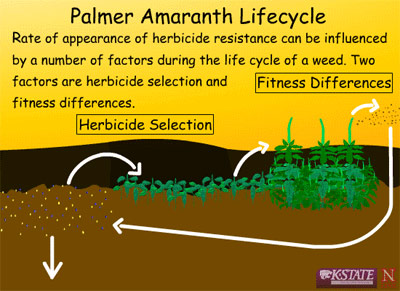 [Using multiple herbicides] is a flawed argument. Stacking up tolerance traits may delay the appearance of resistant weeds, but probably not for long. Weeds are wily: farmers have already reported some plants that are resistant to more than five herbicides. And with glyphosate-resistant weeds already in many fields, the chances of preventing resistance to another are dropping.

Drought conditions are also causing food prices to spike, but it’s astonishing how few people understand the connection between deforestation and drought. Every year, 18 million acres of forest are destroyed for agricultural, commercial and residential purposes (4), removing a critical “re-transpiration” mechanism that helps create continental rainfall.

If you remove the forests near the coast, in other words, you halt much of the rain that should occur inland. But conventional agriculture rarely considers such intricate connections between forests, rainfall and agricultural production. Instead, it’s based on a “rape and pillage the land” model that maximizes short-term production while destroying long-term sustainability.

Chemical-based agriculture is also devastating to soil microbes; the very organisms that promote plant health, disease resistance and nutrient uptake. When soils are sprayed with glyphosate and other chemicals, many microbes are wiped out, leaving crops more susceptible to disease and environmental stress (such as low rainfall or high temperatures).

At the same time, conventional chemical agriculture is largely dependent on non-renewable fossil water aquifers that are rapidly dwindling in supply. Much of the underground water that currently feeds agricultural food production in Texas, Oklahoma, Kansas and Colorado, for example, is headed for an imminent collapse as large aquifers run dry. Combined with deforestation and the heavy plowing of top soils, this will inevitably lead to a massive, multi-state Dust Bowl scenario that nearly collapses food production in many areas. 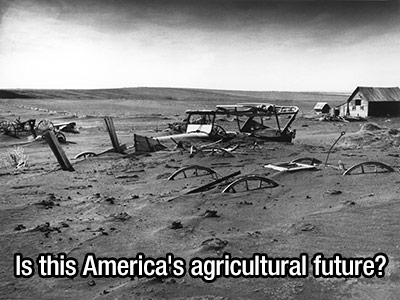 What I’m really trying to get across here is not merely that food prices are going to skyrocket in the years ahead, but that conventional (chemical-based) agriculture is hurtling us all toward systemic food shortages and, ultimately, mass starvation.

The short-term thinking that dominates food production today is largely unsustainable in the long term, and it destroys the soils and ecosystem in the process. Only “holistic agriculture” practices like Permaculture have any real hope of providing a sustainable food supply well into the future.

For this reason, Geoff Lawton’s permaculture wisdom should be immediately embraced by agricultural universities like Texas A&M and taught to all students. The principles of permaculture are the kind of principles that can save human civilization from mass starvation and a collapse of the food supply.

Often, the things that I state here on Natural News are so far ahead of common knowledge that they take years to be embraced. For example, I was warning about the dangers of sunscreen long before it was widely known that sunscreen promotes cancer by causing vitamin D deficiencies.

Today, I am asserting these fundamental truths which humanity must learn or perish:

1) Food production needs to be decentralized to create food redundancy and local self-sufficiency.

2) Plant diversity in each production plot is the key to disease resistance, pest resistance and weed resistance. (Note that nearly all commercially-produced crops are mono-cropped with zero diversity.)

3) Soil microbes must be protected, not poisoned, to create healthy food crops that are resistant to disease and more resilient to stress.

4) Soil remineralization, not chemical poisoning, is the key to healthy plants and increased food production. Fortunately, the world’s oceans are filled with all the minerals our plants really need (minus the salt, of course).

6) Food security IS national security. While the U.S. government believes in maintaining a strategic oil supply, for some reason it neglects the importance of strategic home gardening and local food production — an idea which was openly encouraged in World War II in the form of “Victory Gardens.”

7) Any civilization that destroys its ability to sustainably produce nourishing food will sooner or later perish. The United States of America — and much of the world — is already on this path of self destruction.

If we do not change our ways, much of the U.S. population will find itself in an era of starvation in just 2-3 decades.

More than ever, it’s worth growing your own food

The good news is that as food prices continue to rise, the economic argument for growing some of your own food makes increasing sense. After all, the time and effort required to grow food has always remained about the same over the years, regardless of what happens to food prices in the grocery store.

Many families are right now spending $1,000 – $2,000 per month on groceries. At roughly $20,000 per year in after-tax expenditures, this creates a compelling argument for growing a significant portion of your own food. Carrots, lettuce, cabbage, onions, potatoes, broccoli, peppers, tomatoes, squash, watermelons, beans and herbs are all very easily grown at home.

With a little more investment — such as building an aquaponic system — food production can be reliably doubled or tripled in the same amount of space (using virtually no soil and very little water in the process, by the way).

Small greenhouses also become more economically feasible thanks to their ability to extend growing seasons, allowing families to produce their own food during more months of the year.

When one gallon of milk has now reached nearly $10 in Hawaii, suddenly all these home-grown food production strategies become real money-saving strategies.

On a personal note, I raise dozens of chickens and harvest fresh chicken eggs each day, producing high-quality, better-than-organic eggs that would normally cost $5 per dozen at Whole Foods. As a bonus, the chickens eat all the grasshoppers and bugs that normally threaten a home garden. That’s why smart home gardeners actually plan their gardens to be surrounded by free-range chickens that run free in a “buffer zone perimeter” that prevents bugs from reaching the garden.

It’s strategies like these that are sustainable, require no toxic chemicals, and can affordably produce local food that’s more nutritious and more sustainable than chemical-based mono-crop agriculture.