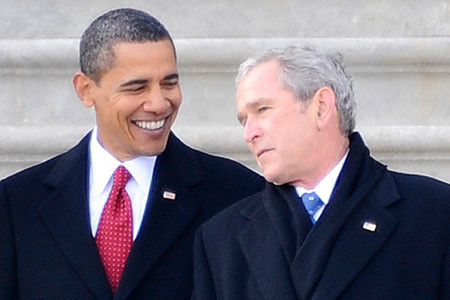 The tragic reality is the Bush II/Obama administrations have made the world a far more dangerous place.

A great many rationales have been floated for the most destructive foreign policy in American history, i.e. the fatally incoherent policies of the Bush II/Obama presidencies.

These rationales come in several flavors:

2. The not-so-secret rationales of Empire and realpolitik

1. The (now repudiated) Neoconservative agenda of remaking the world in our image (i.e. neoliberal democracy) with military force and nation-building.

2. The longstanding policy of hemming in hostile ideologies and empires with alliances, mutually beneficial trade arrangements and the threat of overwhelming military response to any over-reach by hostile nation-states and/or alliances.

The unspoken goal of maintaining U.S. military, diplomatic, economic and cultural dominance is the not-so-secret rationale of Global Empire. From the point of view ofrealpolitik, the official rationales serve as the PR facades of Empire.

Realpolitik is the unspoken underbelly of both official rationales: the essence ofrealpolitik is the ends justify the means: if we have to kiss up to psychopathic dictators, kleptocrats, brutal juntas, extremist groups, unsavory guns-for-hire and even regimes that are visibly hostile to American values and dominance to reach operational goals (for example kill the bad guys), so be it: we will do anything necessary to further our short-term operational goals.

The problem with this kind of short-term thinking in an incoherent strategy is that it only serves expediency: without a coherent strategy based on core values and deeply informed, clearly defined national interests based on those values, expediency inevitably leads to blowback.

In incoherent policies such as those pursued by Bush II/Obama, expedient operations lead to failures that trigger more secrecy and expediency, and there is no end to the failure born of expediency and avoidance of accountability.

Examples of conspiracy-type rationales include One-World agendas fostered by elite groups such as Bilderburg. I find these much less persuasive than good old Empire (i.e. global dominance), because we have to remember that the leadership has to have a narrative that “sells” the tens of thousands of people who are the operational core of the Empire an idealistic and idealized rationale for their sacrifice of morals, values and often their lives.

Serving an Elite agenda isn’t persuasive, and neither is neocon nation-building. What sells is “fighting the enemy before they bring the battle to our Homeland” and the broad service of American Interests, i.e. #2 above: the fostering of democracy and Neoliberal Capitalism with soft power (alliances, trade, loans, etc.) and striking devastating blows to potential enemies before they can organize a strike against us.

The fundamental incoherence arises from the conflicting narratives and goals of these rationales. Precisely how can we serve American Interests by trashing the values we espouse and supporting the very psychopaths, juntas and extremists who foment the sort of instability that threaten American Interests?

If the Master Narrative of U.S. foreign policy is the ends justify the means, then clearly we have chosen our means very poorly.

This raises the larger question of whether a foreign policy that requires actively undermining our values and purported goals of democracy, open markets, stability and prosperity for all can possibly achieve its goal of maintaining Imperial dominance. if the victims of our realpolitik policies and those we have tasked with implementing them both lose faith in the American Project, then it is operationally impossible to win hearts and minds with more drone strikes, more laser-guided bombs and more alliances with the dregs of humanity.

Simplistic ideologies such as Neoconservatism fail in the complex environment of the real world. We might profitably recall that the 1960s equivalent of Neoconservatism was the “domino theory” that held that all small nation-states in a region were prone to “falling like dominoes” to Communist insurgencies, regardless of their history, culture, society, economy and form of government.

In other words, the stubborn ignorance of U.S. foreign policy based on ideological simplicities is near-infinite.

The second source of incoherence is the legalistic mindset that everything can be finessed with more words and policy refinements. This legalistic approach–so clearly the dominant mindset of the Obama administration–is one manifestation of American Exceptionalism: that not only can we remake the world in our astonishingly parochial image, but that we can control the world like we control the power structure at home: by finessing problems with legalistic subtleties (“it depends on the definition of is”) and threatening overwhelming violence (just lace demonstrators with pepper spray and threaten whistleblowers with life in prison) to make the problem go away.

That this legalistic mindset guarantees failure in the real world is lost on those devoted to legalizing all of their extra-legal policies–if not in principle then in name.

Legalizing secrecy, ignorance and killing does not make magically transform these abuses of power into a successful policy. This may well summarize the Bush II/Obama administrations in history.

There are smart, well-informed and globally experienced people in the U.S. government, but they are ignored, dismissed or marginalized precisely because their knowledge threatens the incoherent mess that passes for foreign policy in these catastrophically inept presidencies.

The defining characteristic of the Bush II/Obama administrations is the reliance on secrecy–not to protect “national security” but to avoid accountability. If the operation is secret, its failure can be safely buried. This is the reason why everything is classified in the Bush II/Obama administrations: transparency and public knowledge are anathema because they enable scrutiny and analysis and eventually, accountability.

Secrecy is all about avoiding accountability. “National security” is the facade.

Secrecy is the refuge of every dictatorship, totalitarian regime and fascist junta on the planet. We need only look at the savage response of the Obama administration to whistleblowers who have risked their careers and livelihoods, not to mention their freedom, to expose the most egregious violations of the Constitution and American values to see just how dependent the Obama administration is on secrecy to avoid accountability.

Bush II was no better: using proxies (private contractors, local militia, etc.) has a long history in the U.S. Imperial Project as a way of avoiding accountability and scrutiny, but the Bush II/Obama foreign policy is totally dependent on proxies of one kind or another (consider the explosive rise in the use of killer drones, Obama’s favored proxy).

The real world is not as forgiving as a bought-and-paid-for media; blowback takes many forms. The incoherence of the Bush II/Obama administrations is not only reaping horrendous harvests in the playgrounds of their Imperial ambitions, it is eroding the American public’s trust in their government and the institutions that claim to protect them in a dangerous world.

The tragic reality is the Bush II/Obama administrations have made the world a far more dangerous place. That is blowback writ large.

None of this is new; it’s all well-documented in the public record. The list of books written about the destructive consequences of the Bush II/Obama foreign policies is long; here is a short list of worthy titles to explore:

The Family Jewels: The CIA, Secrecy, and Presidential Power
The Way of the Knife: The CIA, a Secret Army, and a War at the Ends of the Earth
The Occupation of Iraq: Winning the War, Losing the Peace
Nemesis: The Last Days of the American Republic
Fiasco: The American Military Adventure in Iraq
Hubris: The Inside Story of Spin, Scandal, and the Selling of the Iraq War
Imperial Life in the Emerald City: Inside Iraq’s Green Zone
Licensed to Kill: Hired Guns in the War on Terror
The Looming Tower: Al-Qaeda and the Road to 9/11
Imperial Hubris: Why the West Is Losing the War on Terror
State of Denial: Bush at War, Part III
Ghost Wars: The Secret History of the CIA, Afghanistan, and Bin Laden, from the Soviet Invasion to September 10, 2001
See No Evil: The True Story of a Ground Soldier in the CIA’s War on Terrorism

1 thought on “The Most Destructive Presidencies In American History, Part 2: The Fatal Incoherence Of Bush/Obama Foreign Policy”