It has been a while since both Ukraine, and the ongoing Russian response to western sanctions (which set off the great Eurasian axis in motion, pushing China and Russia close together, and accelerating the “Holy Grail” gas deal between the two countries) have made headlines. It is still not clear just why the western media dropped Ukraine coverage like a hot potato, especially since the civil war in Ukraine’s Donbas continues to rage and claim dozens of casualties on both sides. Perhaps the audience has simply gotten tired of hearing about mixed chess/checkers game between Putin vs Obama, and instead has reverted to reading the propaganda surrounding just as deadly events in the third war of Iraq in as many decades.

However, “out of sight” may be just what Russia’s political elite wants. In fact, as VoR’s  Valentin Mândr??escu reports, while the great US spin and distraction machine is focused elsewhere, Russia is already preparing for the next steps. Which brings us to Putin advisor Sergey Glazyev, the same person who in early March was the first to suggest Russia dump US bonds and abandon the dollar in retaliation to US sanctions, a strategy which worked because even as the Kremlin has retained control over Crimea, western sanctions have magically halted (and not only that, but as the Russian central bank just reported, the country’s 2014 current account surplus may be as high as $35 billion, up from $33 billion in 2013, and a far cry from some fabricated “$200+ billion” in Russian capital outflows which Mario Draghi was warning about recently). Glazyev was also the person instrumental in pushing the Kremlin to approach China and force the nat gas deal with Beijing which took place not necessarily at the most beneficial terms for Russia. 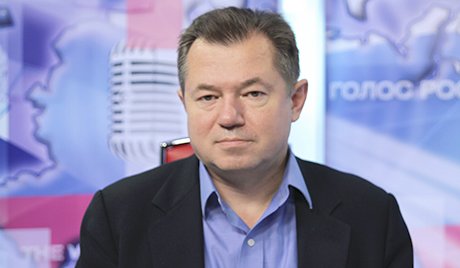 It is this same Glazyev who published an article in Russian Argumenty Nedeli, in which he outlined a plan for “undermining the economic strength of the US” in order to force Washington to stop the civil war in Ukraine. Glazyev believes that the only way of making the US give up its plans on starting a new cold war is to crash the dollar system.

As summarized by VoR, in his article, published by Argumenty Nedeli, Putin’s economic aide and the mastermind behind the Eurasian Economic Union, argues that Washington is trying to provoke a Russian military intervention in Ukraine, using the junta in Kiev as bait. If fulfilled, the plan will give Washington a number of important benefits. Firstly, it will allow the US to introduce new sanctions against Russia, writing off Moscow’s portfolio of US Treasury bills. More important is that a new wave of sanctions will create a situation in which Russian companies won’t be able to service their debts to European banks.

Co-opting European countries in a new arms race and military operations against Russia will increase American political influence in Europe and will help the US force the European Union to accept the American version of the Transatlantic Trade and Investment Partnership, a trade agreement that will basically transform the EU into a big economic colony of the US. Glazyev believes that igniting a new war in Europe will only bring benefits for America and only problems for the European Union. Washington has repeatedly used global and regional wars for the benefit of  the American economy and now the White House is trying to use the civil war in Ukraine as a pretext to repeat the old trick.

Glazyev’s set of countermeasures specifically targets the core strength of the US war machine, i.e. the Fed’s printing press. Putin’s advisor proposes the creation of a “broad anti-dollar alliance” of countries willing and able to drop the dollar from their international trade. Members of the alliance would also refrain from keeping the currency reserves in dollar-denominated instruments. Glazyev advocates treating positions in dollar-denominated instruments like holdings of junk securities and believes that regulators should require full collateralization of such holdings. An anti-dollar coalition would be the first step for the creation of an anti-war coalition that can help stop the US’ aggression.

Unsurprisingly, Sergey Glazyev believes that the main role in the creation of such a political coalition is to be played by the European business community because America’s attempts to ignite a war in Europe and a cold war against Russia are threatening the interests of big European business. Judging by the recent efforts to stop the sanctions against Russia, made by the German, French, Italian and Austrian business leaders, Putin’s aide is right in his assessment. Somewhat surprisingly for Washington, the war for Ukraine may soon become the war for Europe’s independence from the US and a war against the dollar.