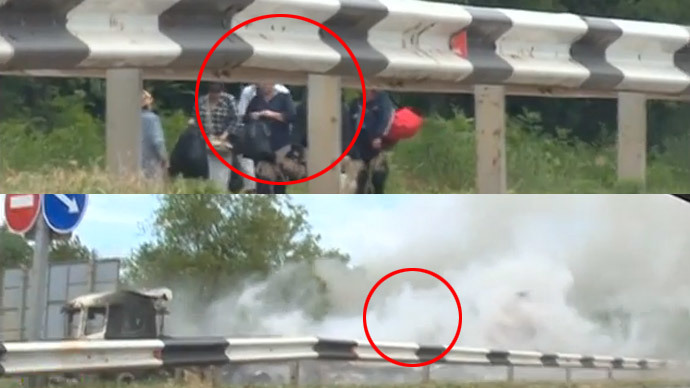 Having survived a ruthless mortar attack by Kiev armed forces on a group of refugees escorted by local militia in Eastern Ukraine, the cameraman of Rossiya TV channel recalls details of the shelling that took the lives of his two colleagues.

He was standing just a few hundred meters from a spot where the mortar shells fell, Viktor Denisov of Rossiya TV states.

“We were heading towards the location where, according to our information, the local militia was trying to secure refugees, leading them away from possible attacks. I was walking together with a representative of the self-defense forces, when I saw a group of about eight people – the refugees,” Viktor Denisov of the Rossiya TV crew said.

“The militia were directing people towards the safe road. At that very moment the first shell exploded right next to a militia guy. The hand, with which he was pointing to a safe place just moments ago, was torn in pieces.”

He added that his colleagues were at that location too, where he heard more shells exploding in the following minutes. As he was standing around 200 meters from the scene, he didn’t see them clearly behind the trees. “I just saw and filmed a self-defence member pulling out another one, who had no legs.”

Taking cover in the distance, Denisov has managed to film a series of explosions that hit the area where just moments ago people were standing.

As the explosions kept going, Denisov realised it was gravely dangerous to check on the impact site. He didn’t know if his colleagues were dead or alive as he ran in the opposite direction to take cover with the refugees in the forest.

He joined a group of people, “a babushka who could barely walk” among them, who were all carrying heavy bags, and they all walked deeper into the forest away from the blasts.

As they went through the woods they witnessed more shelling behind. “Shells kept exploding and we were hiding in the bushes, ground folds,” Viktor Denisov recollected, describing how the Ukrainian military kept pounding the pre-sighted fire zone.

“One hundred percent it was not accidental fire, it was an aimed action from the National Guards’ side,” the attack’s survivor said in an interview, adding that all the refugees were wearing plain clothes and were obviously civilians, while the journalists had clearly visible press insignia. 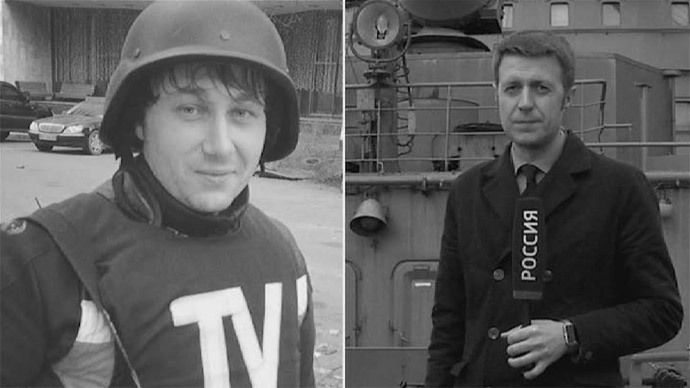 The Rossiya TV channel crew was working near the city of Lugansk in Eastern Ukraine on Tuesday, covering the stream of refugees fleeing the area of possible attacks. When they came under mortar fire, sound engineer Anton Voloshin, immediately died at the scene, while reporter Igor Kornelyuk passed away later on the operating table.

Those military units and various combat groups conducting the so-called ‘anti-terrorist’ operation in Eastern Ukraine are themselves “committing real terror” against civilians as well as journalists, Russian Foreign Ministry said in a statement.

The Russian journalists’ deaths have once again “convincingly shown the criminal essence of the forces that have unleashed the punitive operation in the east of Ukraine, in which civilians continue being killed,” the ministry said, demanding authorities in Kiev carefully investigate the tragedy and punish those responsible.