What would you say if I told you that Americans are nearly 60 TRILLION dollars in debt?  Well, it is true.  When you total up all forms of debt including government debt, business debt, mortgage debt and consumer debt, we are 59.4 trillion dollars in debt.  That is an amount of money so large that it is difficult to describe it with words.  For example, if you were alive when Jesus Christ was born and you had spent 80 million dollars every single day since then, you still would not have spent 59.4 trillion dollars by now.  And most of this debt has been accumulated in recent decades.  If you go back 40 years ago, total debt in America was sitting at about 2.2 trillion dollars.  Somehow over the past four decades we have allowed the total amount of debt in the United States to get approximately 27 times larger.  This is utter insanity, and anyone that thinks this is sustainable is completely deluded.  We are living in the greatest debt bubble of all time, and there is no way that this is going to end well.

Just check out the chart… 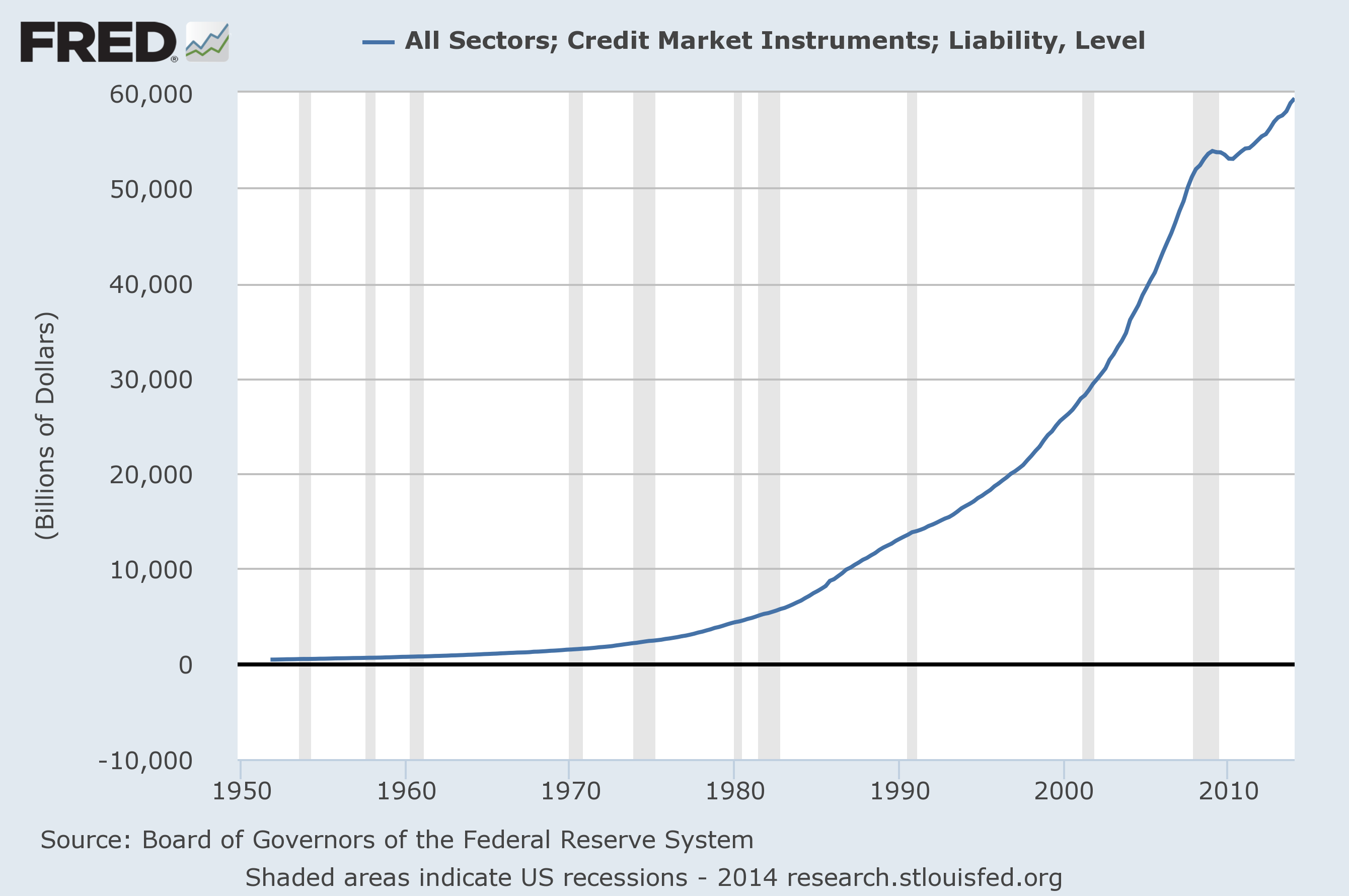 When the last recession hit, total debt in America actually started going down for a short period of time.

But then the Federal Reserve and our politicians in Washington worked feverishly to reinflate the bubble and they assured everyone that everything was going to be just fine.  So Americans once again resorted to their free spending ways, and now total debt in the United States is rising at almost the same trajectory as before and has hit a new all-time record high. 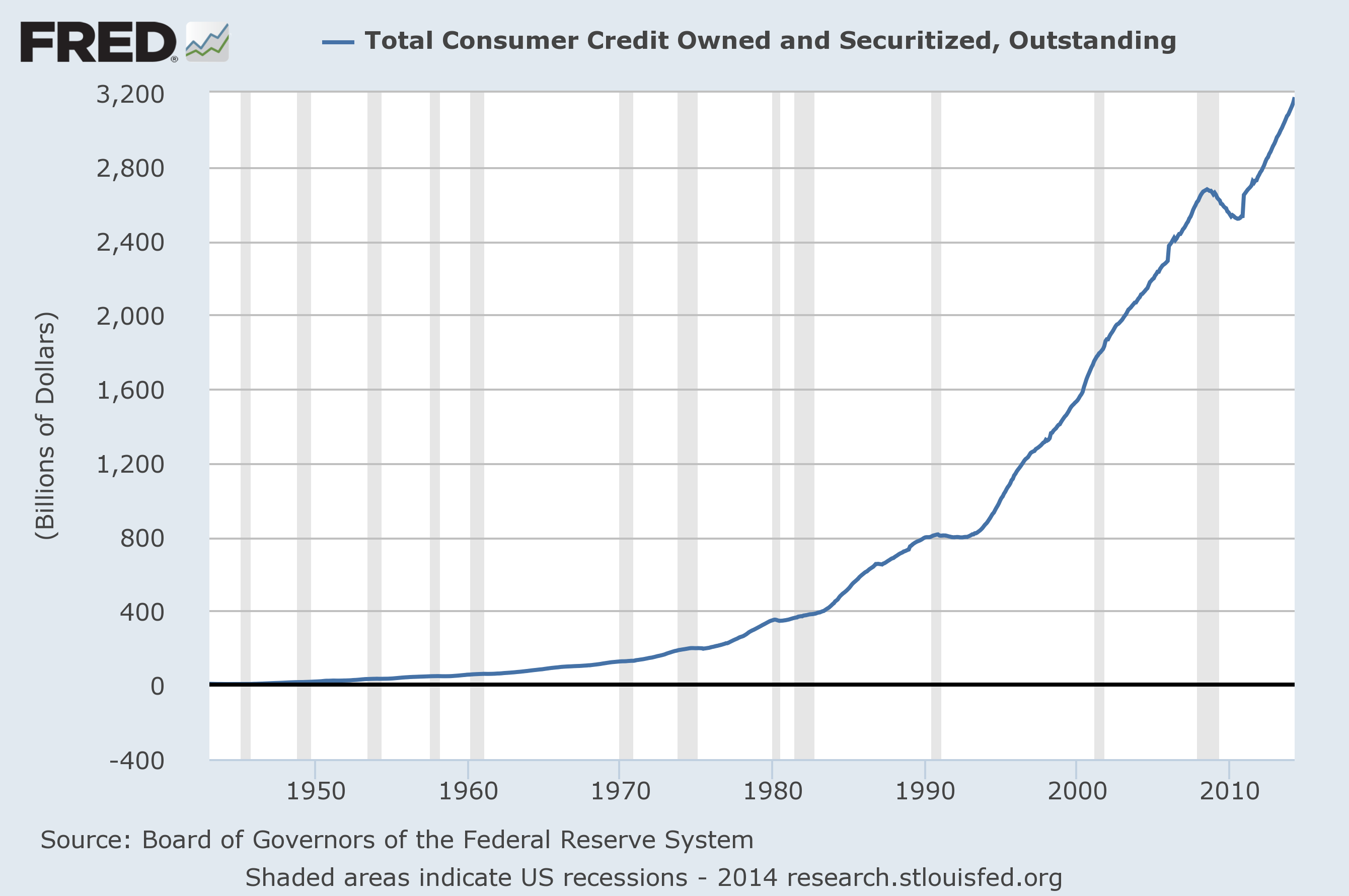 For a while after the recession it was trendy to cut up your credit cards and get out of debt.

But that fad wore off rather quickly, didn’t it?

It is almost as if 2008 never happened.  We are making the same mistakes with debt that we did before.

As I noted recently, total consumer credit in the U.S. has risen by 22 percent over the past three years alone, and at this point 56 percent of all Americans have a subprime credit rating.

And have you noticed that a lot of people are not afraid to extend themselves in order to buy shiny new vehicles these days?

During the first quarter 0f this year, the size of the average vehicle loan soared to a new all-time record high of $27,612.

And as I noted in one recent article, the size of the average monthly car payment in this country is now up to $474.

That is practically a mortgage payment.

Speaking of mortgage payments, even though home sales have been falling and the rate of homeownership in the United States is the lowest that it has been in 19 years, a very large percentage of those who own homes are still overextended.

In fact, one recent survey discovered that a whopping 52 percent of Americans cannot even afford the house that they are living in right now.

At the same time, an increasing number of Americans are acting as if the last financial crisis never happened and are treating their homes like piggy banks.   Home equity loans are soaring again, and when the next great crisis strikes a lot of those people are going to end up getting into a lot of financial trouble.

There has been much written about what is wrong with the housing industry, but the truth is that home prices are still way too high and young adults cannot afford to purchase homes because they are already loaded down by huge amounts of debt even before they get to the point where they are ready to buy.

In fact, a newly released survey found that 47 percent of millennials are spending at least half of their paychecks on paying off debt…

Four in 10 millennials say they are “overwhelmed” by their debt — nearly double the number of baby boomers who feel that way, according to a Wells Fargo survey of more than 1,600 millennials between 22 and 33 years old, and 1,500 baby boomers between 49 and 59 years old.

To try to get out from underneath it, 47%said they spend at least half of their monthly paychecks on paying off their debts.

When I read that I was absolutely astounded.

What we have done to our young people is shameful.  We have encouraged them to sign up for a lifetime of debt slavery before they even understand what life is all about.  The following is an excerpt from my previous article entitled “Is College A Waste Of Time And Money?“…

In America today, approximately two-thirds of all college students graduate with student loan debt, and the average debt level has been steadily rising.  In fact, one study found that “70 percent of the class of 2013 is graduating with college-related debt – averaging $35,200 – including federal, state and private loans, as well as debt owed to family and accumulated through credit cards.”

That would be bad enough if most of these students were getting decent jobs that enabled them to service that debt.

But unfortunately, that is often not the case.  It has been estimated that about half of all recent college graduates are working jobs that do not even require a college degree.

Considering what you just read, is it a surprise that half of all college graduates in America are still financially dependent on their parents when they are two years out of college?

According to the U.S. Census Bureau, only 36 percent of all Americans under the age of 35 own a home at this point.  That is the lowest level that has ever been recorded.

But this is just the beginning.  As the Baby Boomer “demographic tsunami” washes through our economy, we are going to be facing a wave of red ink unlike anything we have ever contemplated before.

Meanwhile, the rest of the planet is drowning in debt as well.

Our “leaders” keep acting as if these debt levels can keep growing much faster than the overall level of economic growth indefinitely.

But anyone with even a shred of common sense knows that you can’t spend more money that you bring in forever.

At some point, a day of reckoning arrives.

2008 should have been a major wake up call that resulted in massive changes.  But instead, our leaders just patched up the old system and reinflated the old bubbles so that they are now even larger than they were before.

They assure us that they know exactly what they are doing and that everything will be just fine.

Unfortunately, they are dead wrong.

6 thoughts on “The United States Of Debt: Total Debt In America Hits A New Record High Of Nearly 60 Trillion Dollars”