Now that 25 year old math PhD HFT programmers have finally figured out what this thing called Iraq is, and why headlines around it should factor into algo trading signals – especially those of crude oil – here, for their benefit is a summary of the latest events in Iraq, and also for everyone else confused why crude is back to levels not seen since last summer.

As the WSJ reports, after hard core Al Qaeda spin off ISIS (no relation to Sterling Archer) took over Saddam’s home town of Tikrit yesterday, Iraq edged closer to all-out sectarian conflict on Thursday as Kurdish forces took control of a provincial capital in the oil-rich north and Sunni militants vowed to march on two cities revered by Shiite Muslims.  Kurdish militia known as peshmerga said they had taken up positions in key government installations in Kirkuk, as forces of the Shiite-dominated government of Prime Minister Nouri al-Maliki abandoned their posts and fled in fear of advancing Sunni militants, an official in the office of the provincial governor said.

Reuters adds that “The whole of Kirkuk has fallen into the hands of peshmerga,” citing Jabbar Yawar. “No Iraqi army remains in Kirkuk now.”

This in turn has put the output of the key Kirkuk-Ceyhan pipeline, with a 1.6MM bbls/day capacity, at risk. 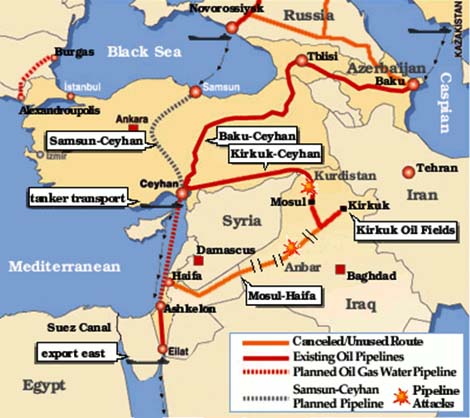 The militia were operating out of the headquarters of the Iraqi army’s 2nd Division. The official said western parts of Kirkuk province were still under the control of fighters from the Islamic State of Iraq and al-Sham, or ISIS, an al Qaeda offshoot.

Abu Mohammed al-Adnani, a spokesman for the Islamic State of Iraq and al-Sham, said the al Qaeda-inspired group would advance on Karbala and Najaf, as well as the capital Baghdad, the Associated Press reported, citing an audio statement.

However, as we showed yesterday, the final ISIS target is none other than the city of Baghdad, and the overthrow of the Iraq government entirely.

In Tikrit, militants have set up military councils to run the towns they captured, residents said.

“They came in hundreds to my town and said they are not here for blood or revenge but they seek reforms and to impose justice. They picked a retired general to run the town,” said a tribal figure from the town of Alam, north of Tikrit.

“’Our final destination will be Baghdad, the decisive battle will be there,’ that’s what their leader of the militants group kept repeating,” the tribal figure said.

The powerful Shiite leader, Moqtada al-Sadr, urged his followers on Wednesday to form military units to defend the two cities, which along with Mecca and Medina in Saudi Arabia are considered sacred by Shiites.

Before he suspended its operations in 2008, Mr. Sadr’s Mahdi Army, once estimated to have nearly 60,000 members, played a major role in the country’s Sunni-Shiite sectarian conflict.

His call for military mobilization came after Mr. Maliki said the government would arm citizens who volunteer to fight militants, after the fall of Mosul on Tuesday.

Security was stepped up in Baghdad to prevent the Sunni militants from reaching the capital, which is itself divided into Sunni and Shi’ite neighborhoods and saw ferocious sectarian street fighting in 2006-2007 under U.S. occupation.

The Kurdish capture of Kirkuk instantly overturns the fragile balance of power that has held Iraq together as a state since Saddam’s fall.

Iraq’s Kurds have done well since 2003, running their own affairs while being given a fixed percentage of the country’s overall oil revenue. But with full control of Kirkuk – and the vast oil deposits beneath it – they could earn more on their own, eliminating the incentive to remain part of a failing Iraq.

Maliki’s army already lost control of much of the Euphrates valley west of the capital to ISIL last year, and with the evaporation of the army in the Tigris valley to the north this week, the government could be left in control only of Baghdad and areas south.

The surge also potentially leaves the long desert frontier between Iraq and Syria effectively in ISIL hands, advancing its stated goal of erasing the border altogether and creating a single state ruled according to mediaeval Islamic principles.

Maliki described the fall of Mosul as a “conspiracy” and said the security forces who had abandoned their posts would be punished. He also said Iraqis were volunteering in several provinces to join army brigades to fight ISIL.

In a statement on its Twitter account, ISIL said it had taken Mosul as part of a plan “to conquer the entire state and cleanse it from the apostates”, referring to the province of Nineveh of which the city is the capital.

Militants were reported to have executed soldiers and policemen after their seizure of some towns.

And while all of the above explains oil’s spike today, now that the world has yet another geopolitical hotzone to follow, following the China-Japan naval conflict, the China-Vietnam escalation, the Thailand martial law, the Ukraine civil war and now the Iraq collapse, expect the USDJPY rigging crew to ignite enough momentum to send the S&P 500 to fresh all time highs.