“Of course, since neither facts, nor news, nor events, nor anything matters in a centrally-planned market, just BTFATH.” 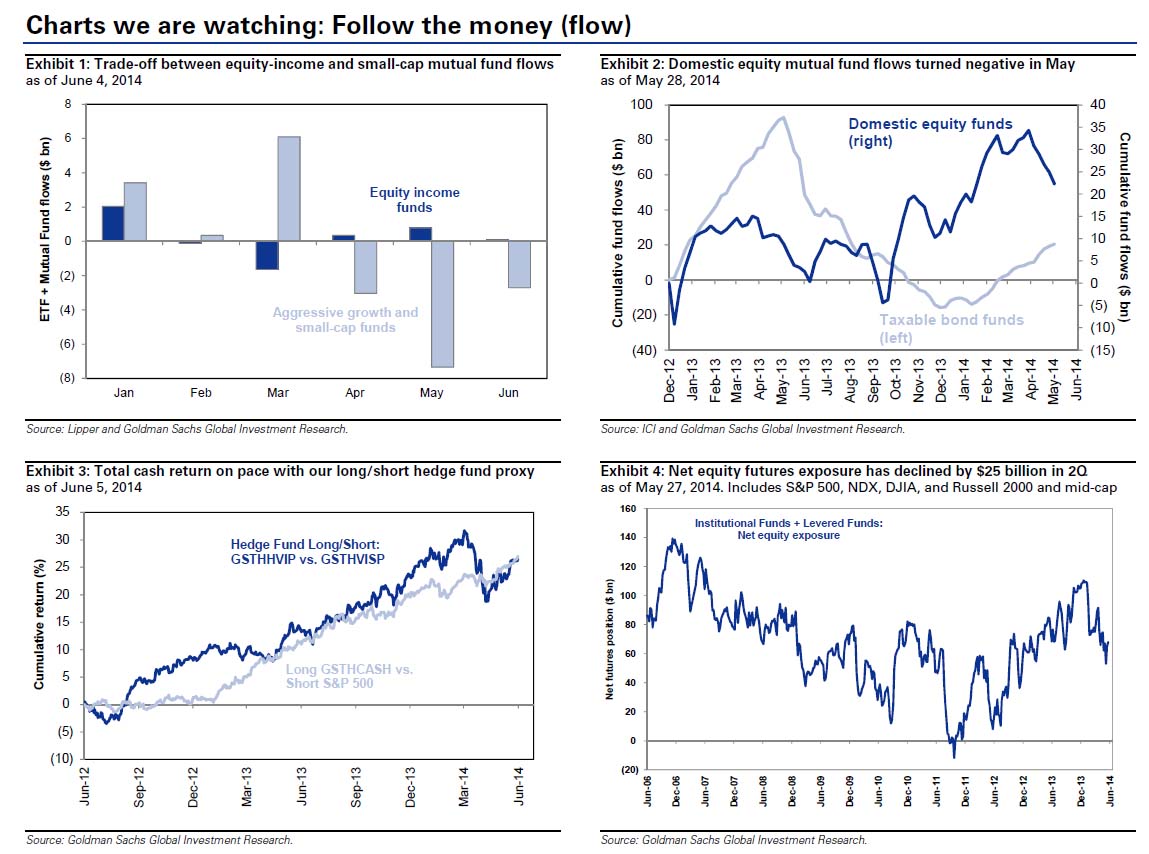 –  The Mystery Grows: Goldman Finds That Virtually Everyone “Sold In May” (ZeroHedge, June 8, 2014):

The great mystery of the endlessly levitating market continues to confound everyone, even Goldman Sachs. Because while the market soared in May (and has continue to surge in June) contrary to the sell in May mantra, when peeking beneath the market’s covers, Goldman has found that most investor groups did just as they are supposed to do for this time of the year: they sold!

While many investors puzzle over the decline in 10-year US Treasury yields to 2.6% alongside the S&P 500 at an all-time high, recent data suggest they moved flows in the same direction. Mutual fund, futures, and ETF data show a shift away from stocks and towards bonds during the past month. Pension funds have also sold stocks and bought bonds in 1Q. Equity market performance supports a pro-risk stance offset by a muted return outlook given high current valuations.

US equity flows have weakened during the past month with outflows from US equity mutual funds totaling $10 billion since April 30. The outflows have been broad-based with all categories affected other than Equity Income funds. The preference for yield is also evident in continued strong flows into taxable bond funds as well as outperformance by stocks with high dividend yield. Small-cap funds have experienced the largest outflows consistent with Russell 2000 lagging the S&P 500 by 625 bp YTD (5.9% vs. -0.3%).

Flows are also weaker in relative terms as both bond and international equity funds continue to receive inflows. During the past five weeks $12 billion was withdrawn from ICI domestic equity mutual funds. Meanwhile, $7 billion moved into international equity and $11 billion flowed into taxable bond funds. Both hybrid and municipal bond funds also had inflows. Lipper fund flow data shows a similar but less pronounced trend with $8 billion of outflow from domestic funds in May of which $7 billion was small cap funds.

The combination of fund flows has pushed our Rotation Index to its lowest level since June of last year. Recent flows suggest a modest preference for equity allocation but less risk appetite than during the past year or compared with previous bull markets. The index estimates the risk appetite of retail investors based on the mix of their fund flows as compared with their base-line mutual fund allocation across money market, bond and equity funds. Margin balances in retail brokerage accounts have also eased from very high levels implying less retail risk tolerance.

Institutional investors have also reduced exposure to US equities. Net equity futures positions of Institutional and Levered Funds have declined to $68 bn at the end of May from $92 billion at the start of April (Exhibit 4). The shift has been caused by large growth in the net short exposure of levered funds. Net futures sentiment is below average but has rebounded from very low readings last month. Broad-based short ETF exposure also continues to rise across major indices.

Pension funds have also been selling stocks and buying bonds this year but the pace has outstripped our estimates. Yesterday’s release of the Federal Reserve Flow of Funds report showed pension funds sold $42 billion of equities during 1Q ($168 billion annualized). The outflow is already 7x our initial 2014 annual estimate of $25 billion. Public rather than private pension funds dominated the equity selling. Assets shifted to short-term bonds.

Changes in positioning do not appear to be driven by event or growth risks and may instead reflect fatigue post strong valuation expansion. The options market does not suggest higher event risk as the VIX fell below 12 last week (5th percentile since 1990) and 1-month skew is at its average level over the past 10 years while realized volatility was just 8.2% in May. Low volatility may persist as the average VIX regime lasts more than 3 years.

Performance at the stock level is consistent with high risk tolerance but high current valuation suggests limited upside. Firms with lower return on capital, high realized volatility, and weaker balance sheets have all outperformed peers by about 200 bp this year. However, stocks with high dividend yield are also outperforming as modest upside and low interest rates make dividend-paying stocks attractive from a total return perspective. 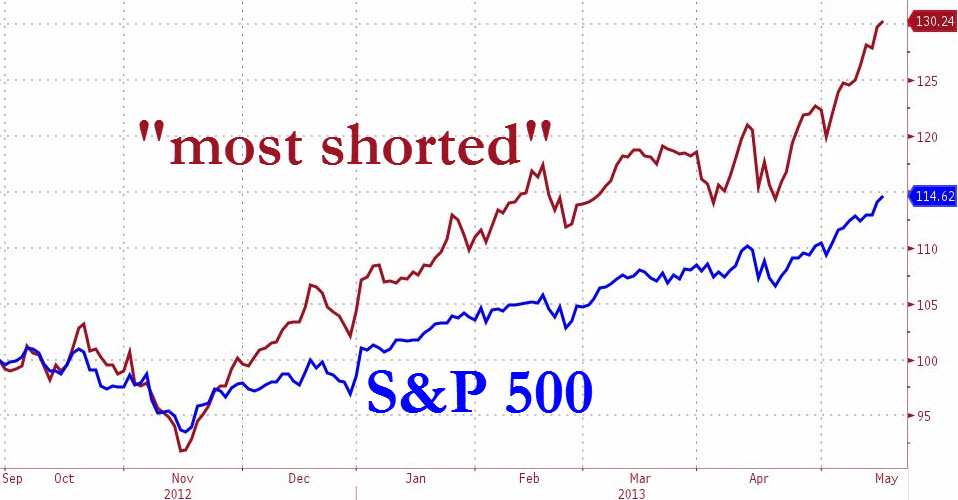 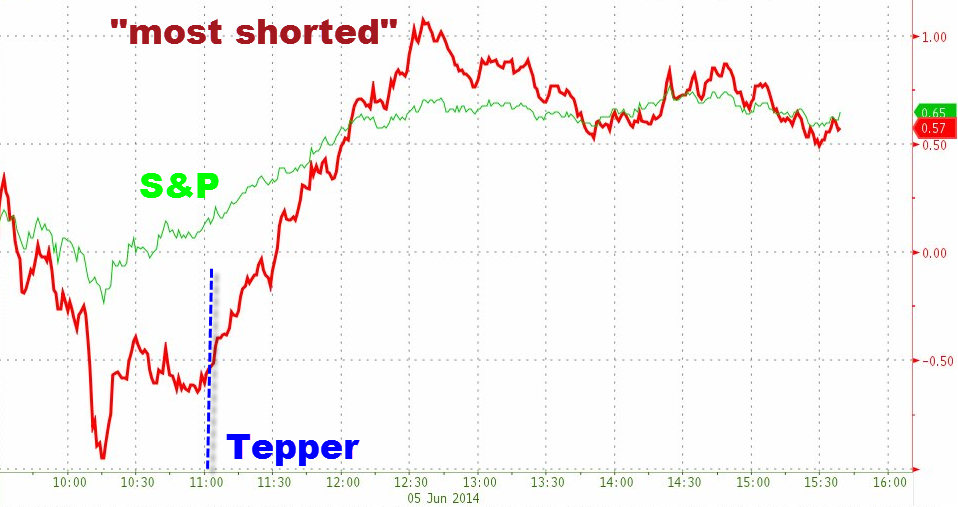 Finally, as Zero Hedge revealed, everyone else may be selling (or shorting) stocks, but here is who is buying with zero considerations for cost or value: 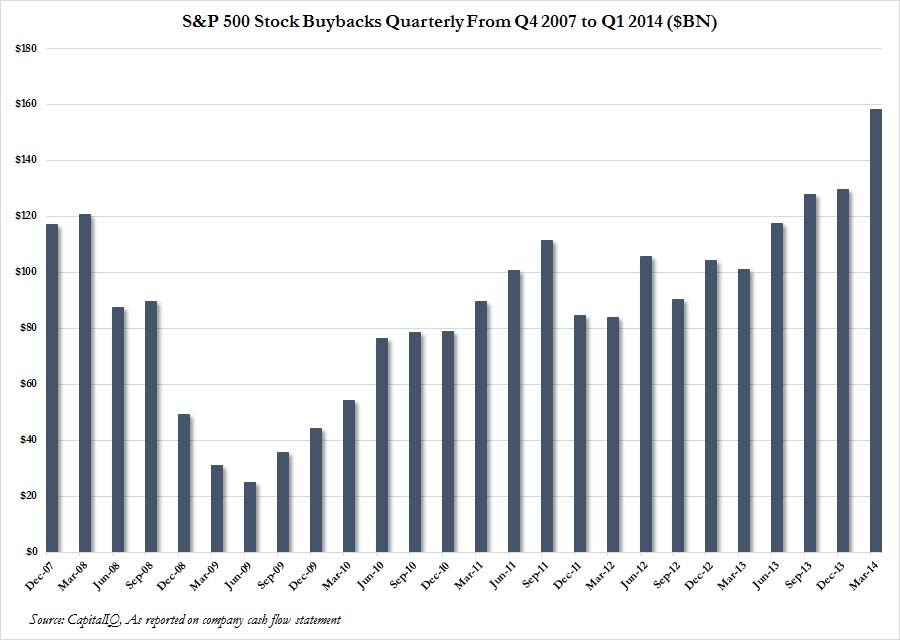 Of course, since neither facts, nor news, nor events, nor anything matters in a centrally-planned market, just BTFATH.

1 thought on “The Mystery Grows: Goldman Finds That Virtually Everyone “Sold In May””