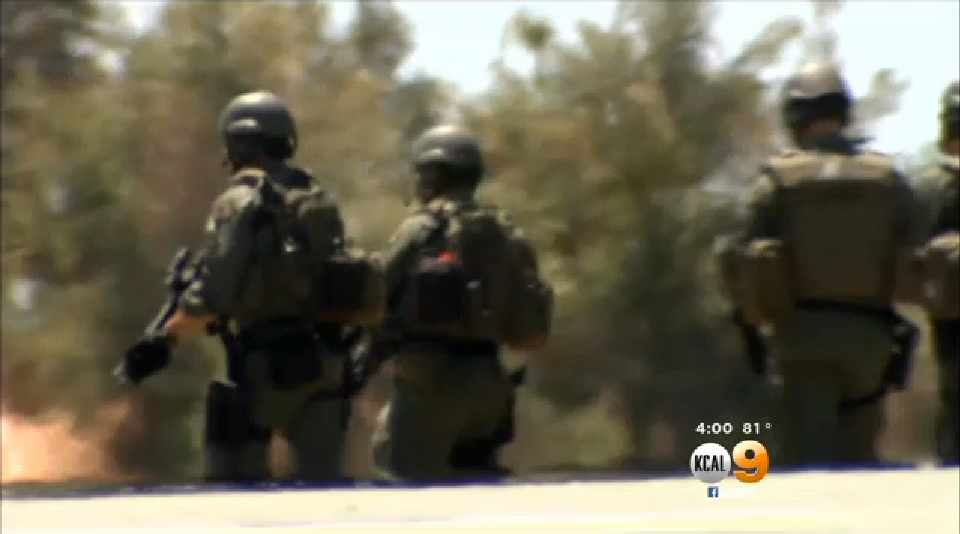 DANA POINT, CA — Students at a California high school were forced to hunker down as SWAT teams with weapons drawn searched their entire campus for weapons.   The effort included a warrantless search of students’ vehicles, lockers, backpacks, and classrooms.  The long 4-hour detention reportedly forced some students to urinate in darkened classrooms.

The dramatic measures were not taken because of a threat, nor an act of violence, nor a crime being committed.  Someone found a carrying case for a firearm in the parking lot — a perfectly legal object that millions of Americans possess.

Panicky school administrators summoned the Orange County Sheriff’s Department around 11:45 a.m. — just before lunch.  Students were immediately locked down and forced to stay detained in their classrooms.

Dozens of officers arrived and brought their $250,000 armored Lenco Bearcat vehicle.  Deputies could be seen suiting up for battle before entering the school. 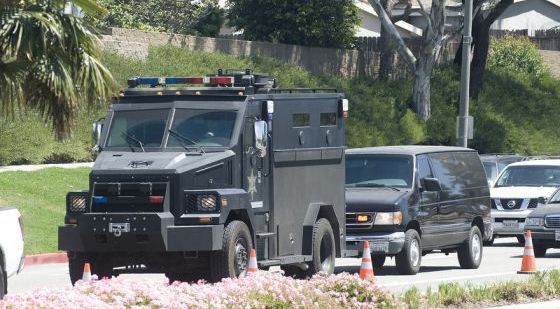 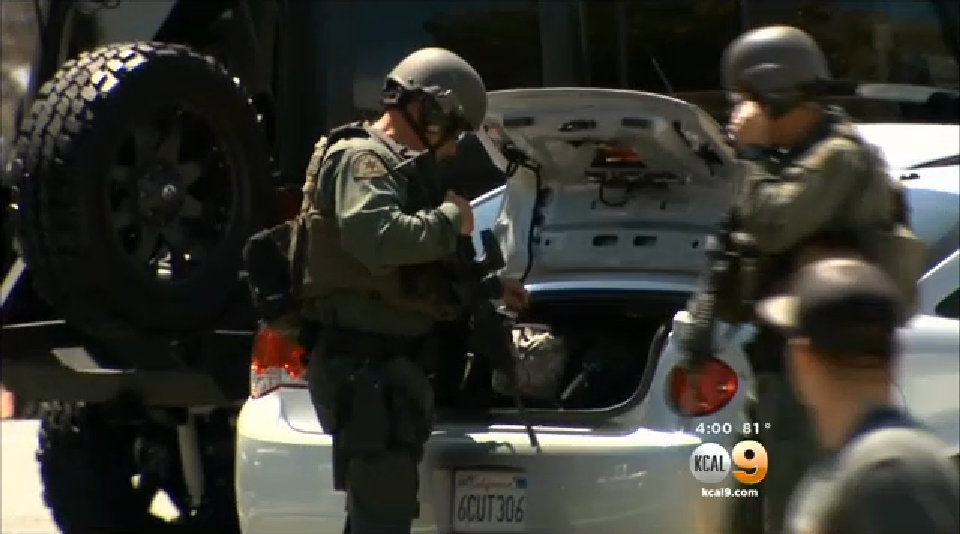 For four long hours, the entire school was searched from top to bottom.  Students were forced to stay in place for the duration.

“My son is texting me from inside. He’s saying that he’s fine and they’re barricaded in a room,” one parent told KCBS during the prolonged incident.

Reportedly, as the LagunaNiguel-DanaPoint Patch wrote, desks were being converted into urinals to accommodate students who were not allowed to leave the classroom to use the bathroom. 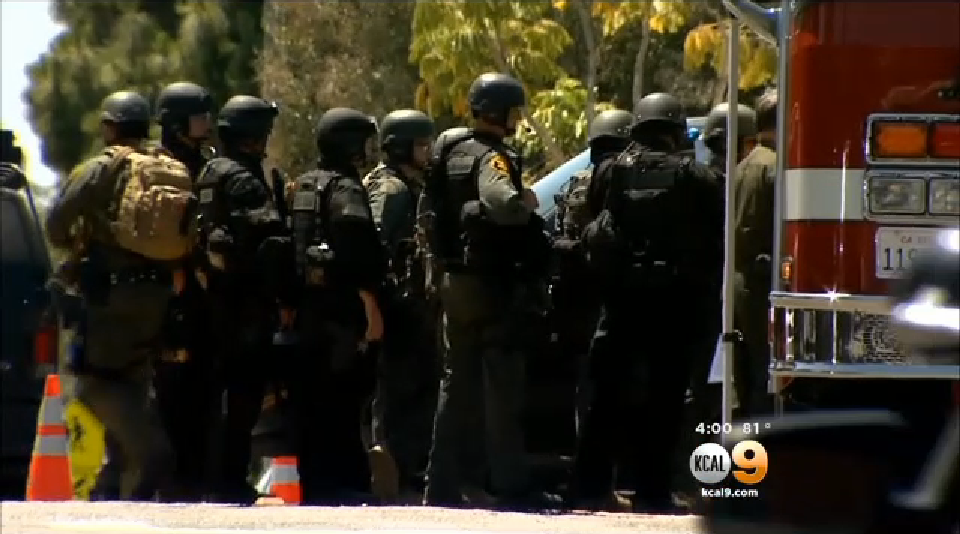 Dozens of concerned parents flocked to the school in hopes of picking up their children, some of whom were communicating via text message with people outside the campus. Some parents told KCAL9 the students’ backpacks were being searched, and some students were being held in darkened rooms.

One parent, Stephanie Andrews, told the station that according to her son, some students were urinating in classroom sinks because they were not being allowed out of their classrooms.

“It is scary to them to see guard dogs and SWAT team members going up and down their school and just in light of recent incidences, not knowing what could happen — it’s very scary to them,” she said. 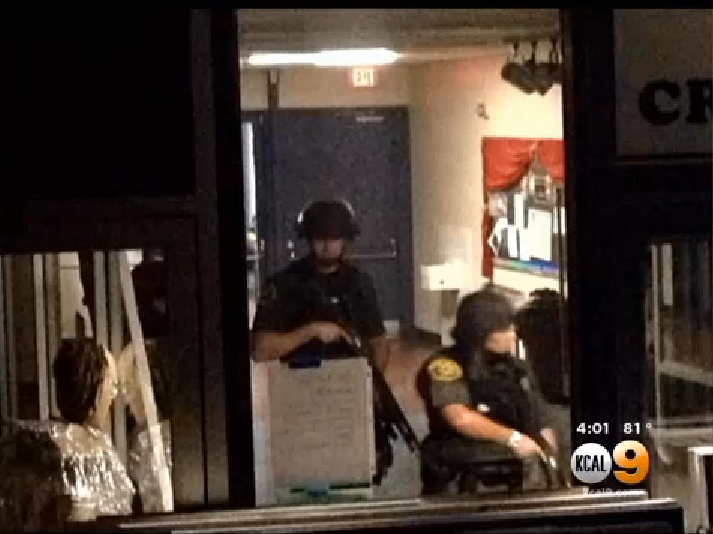 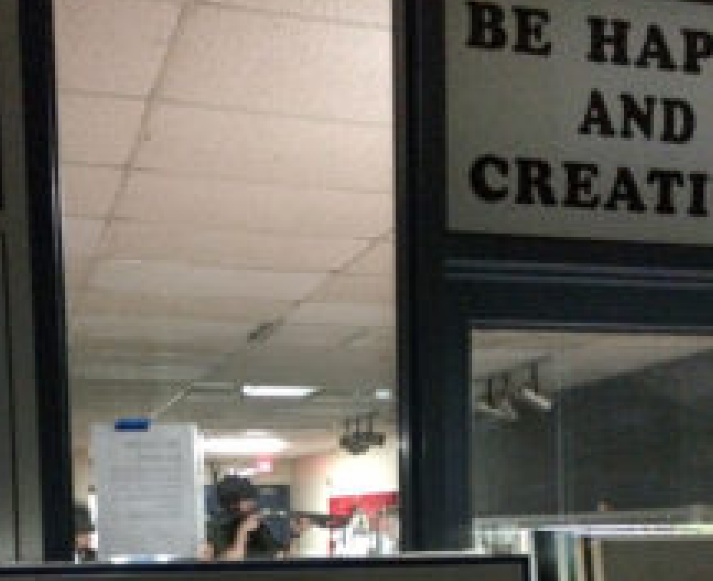 A cop aims his shotgun while searching the school.  (Source: LagunaNiguel-DanaPoint Patch)

The lockdown/detention was not lifted until 4:00 p.m.  Hungry, exhausted students poured out of their classrooms to seek bathrooms and food.

No weapon was found.  No suspect was arrested.  No threats were ever made.  No crime was committed.  No one was in any danger whatsoever — except from having their rights violated and safety jeopardized by overzealous, paramilitary cops.

It was never determined who owned the carrying case, nor should it matter.  Owning a carrying case is not a crime.  And despite what paranoid voices claim, the presence of a weapon does not demonstrate the intent of a crime either.  A generation ago students were taught how to use firearms responsibly; today they are taught ignorance and fear of arbitrary objects.