The Harvard Extension Cultural Studies Club had decided to move the event off campus last night after widespread objections, and no other location was willing to host it, according to an e-mailed statement from the group.

“Given that no other location has been willing to intercede, we will no longer be sponsoring this black mass,” the group said.

The university had decided not to block the event, even though President Drew Faust said she opposed it. A parody of the Roman Catholic mass, the black mass was to be held in the Queen’s Head Pub in Memorial Hall’s basement, according to a club announcement. Preregistration was required and attendance was full, the club had said in a statement earlier yesterday.

About 60,000 people, many of them Harvard students, faculty and alumni, signed online petitions protesting the black mass and urging Harvard to stop it, said Aurora Griffin, a senior at the college. The signatures were presented to Faust yesterday, Griffin said in an e-mailed statement. Religious leaders have also written to express their dismay and opposition to the event. Faust joined their voices, saying she would attend a holy hour at St. Paul’s Church on Harvard’s campus in Cambridge, Massachusetts, to demonstrate her dissent. The extension school is separate from Harvard College and offers part-time degrees and professional certificates.

“Vigorous and open discussion and debate are essential to the pursuit of knowledge, and we must uphold these values even in the face of controversy,” Faust said yesterday in a statement. “Freedom of expression, as Justice Holmes famously said long ago, protects not only free thought for those who agree with us but freedom for the thought that we hate.”

Robert Neugeboren, the extension school’s dean of students and alumni affairs, said in a May 9 statement that the club was hosting the black mass as part of a series of events to explore other cultures.

The school’s administration had worked with students to ensure that no consecrated host, the sacramental wafer that’s been blessed by a priest and is used in the Eucharist ceremony, would be used to re-enact the black mass. He said he encouraged them to reach out to Catholic student organizations for feedback.

The Cultural Studies Club referred questions about the black mass to Christopher Robichaud, a lecturer in ethics and public policy who will be speaking at the event. The ritual is a useful point for beginning a discussion of political values such as free speech, Robichaud said in a telephone interview.

“What do we really think that religious freedom and free speech demands of us?” Robichaud said. “Does religious tolerance demand only tolerance of rituals that aren’t offensive?”

The Archdiocese of Boston, a group of Harvard chaplains, and Harvard students and alumni all opposed the staging of the ritual. While Harvard is committed to freedom of expression, it’s clear that there are limits to its latitude, said Francis Clooney, a Roman Catholic priest and a professor in Harvard Divinity School.

“If this had been a re-enactment of a Nazi rally or a lynching, the university would have stepped in quickly and stopped it,” he said in a telephone interview. “I’d be concerned that the university is saying, we just allow student groups to do what they want.”

Screenshot (in case the article will disappear): 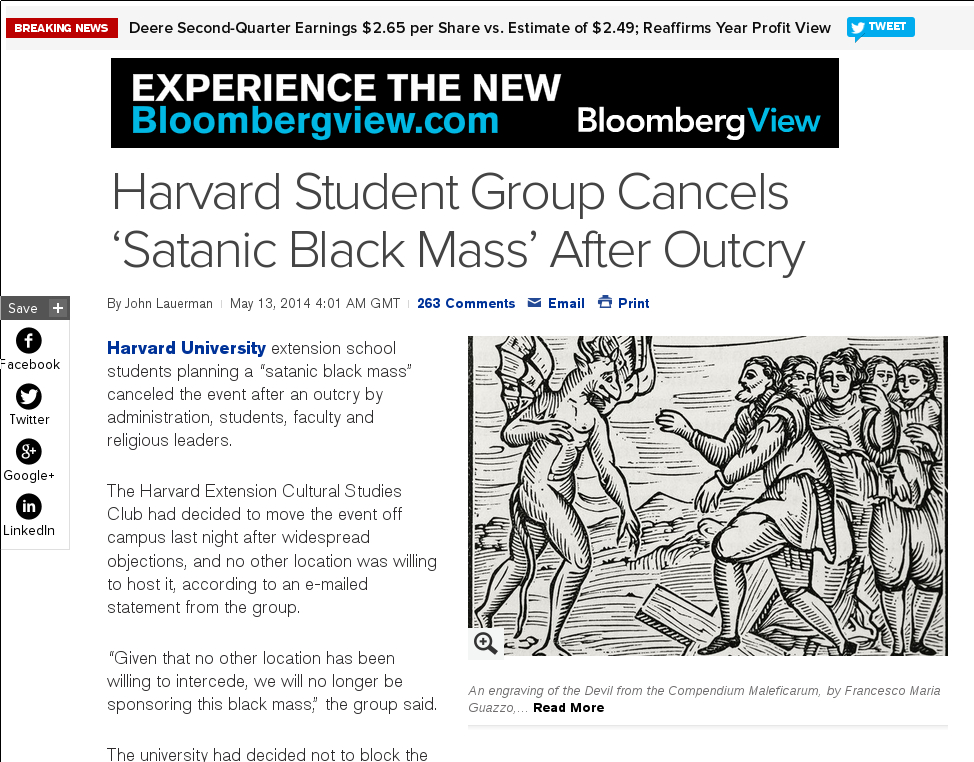