The financial markets in the West are barely pulling themselves together these days and over the last few weeks and months we have discussed the underlying issues at length; especially in the United States the pressure is on as the Fed’s tapering program continues ruthlessly. The US is not the only part of the world, however, where the skies are grey above the markets. We have not read a lot of positive news about the East lately either, where specifically China’s economy is in a slump.

Another problem is burdening the Chinese real estate market, however, as banks become less and less willing to lend money; the Chinese credit market is floundering and this could have bigger consequences. The stress in the financial markets is caused by the hesitation of different players, and market watchers have underlined slowing economic activity as the cause of this phenomenon instead of rising debt positions. Indeed, although Chinese debt is very large in nominal terms, debt ratios remain within reason: government 53%, households 31%, the financial sector 17%, etc. That is not so bad compared to Western statistics that show percentages north of 100% in many cases. Of course, if the Chinese economy slows down significantly today these percentages will go up fast.

The fact that the Chinese economy is not running as smoothly as it did before the crisis became painstakingly obvious again when the latest Chinese PMI figures were posted this week. The ‘HSBC China manufacturing PMI’ ended up at 48.3 for April and although that figure is higher than the previous one from March (48), it still highlights a shrinking Chinese manufacturing industry (< 50). Considering the fact that the Chinese economy is mainly driven by output, rather than consumption, this is not good news. 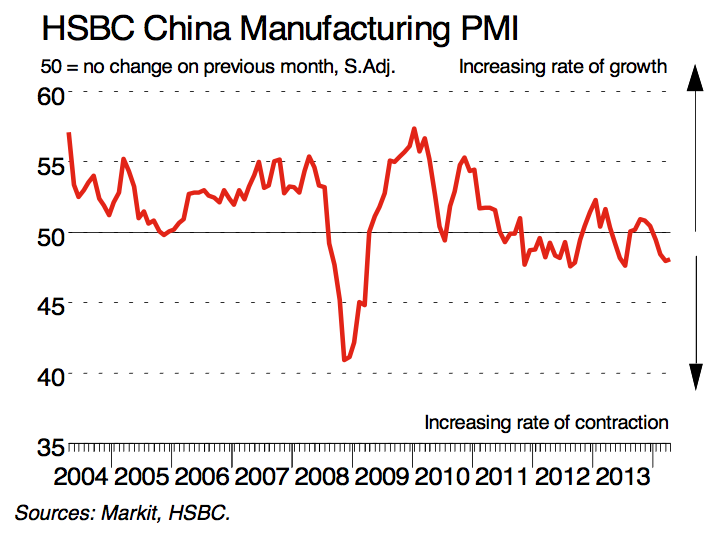 Meanwhile, the authorities in China get the message. The country is not an economic island, namely, but rather for the most part still dependent on the rest of the world where things are not going so well either, to phrase it gently. The Chinese government was probably hoping that their economy would be able to stand on its own two feet by now, with enough domestic demand to support production levels, but unfortunately that is not yet the case and, consequently, the leaders of China have taken to its currency. Since the beginning of 2014 there is a noticeable decline in China’s currency, which is known as the renminbi or the yuan. The Chinese yuan even went into crash mode against the American dollar, from 0.166 to 0.16 in a few months’ time; a drop of 3.5%. That may seem like a non-event to many readers, but in the world of currencies this is a huge deal. Especially when you know that China’s currency has been on the rise against the American dollar since January of 2010.

We suspect that the yuan’s decline is far from over. Chinese authorities will keep printing yuan (at a faster rate than the US central bank prints dollars) to make sure their products become even cheaper and only when these measures translate into a visible improvement in the economic figures, will China take its foot off the gas.

This could be the turnaround investors have been craving for, however, as the Chinese stock market has been struggling for years. Coincidence or not, the Shanghai index barely moved since 2010 when the yuan started to climb. Even more, the short revival after the crash of 2008 was immediately crushed, which is the opposite of the non-stop rise we have seen on the Western markets for the last five years. As a result a huge discrepancy arose between Chinese and Western stocks, but with the turnaround of the currency policy in China, Chinese stocks should finally start seeing the light of day. You do not have to look very far to understand what devaluing a currency can do to a stock market. In Japan, for example, they know all about it: when the Japanese central bank started printing yen en masse in the second half of 2012, the currency was under a lot of pressure (-30%), but the Nikkei 255 jumped up (+50%) in the months after.

Today almost every negative scenario has been priced into Chinese stocks. In other words, there is not a lot of downward risk left, which is evidenced by the reaction of local markets to bad news. It does not matter how disappointing the news from China is, the Shanghai index is stoically holding the 2,000 points level, which has been the line in the sand for about three years now. And our opinion is no secret: if there is no more room to the downside in general, the way up usually travels really fast when the turnaround comes. With Japan’s blueprint in hand, we are expecting fireworks from Chinese stocks if the trend of currency devaluation in China continues. When the Chinese markets wake up, things will probably move quickly and a climb of dozens of percentage points is definitely in the cards. Make sure a part of your portfolio is invested in China!