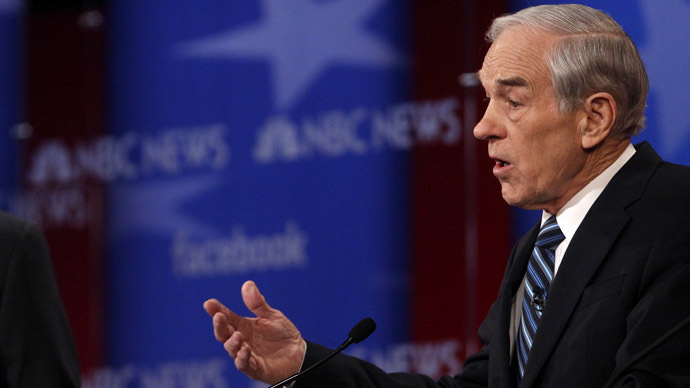 The United States is being hypocritical in its response to the armed clashes between Kiev and pro-Russian groups in eastern Ukraine, former Congressman Ron Paul wrote in a new column.

In the column, published by the Ron Paul Institute for Peace and Prosperity, the former libertarian lawmaker questioned the American role in the conflict unfolding in Ukraine, criticizing the US for blaming recent outbreaks of violence on Russian sympathizers rather than the Ukrainian military.

The column comes just a few days after the Ukrainian military killed about 20 people in Mariupol, where the country’s Interior Ministry claimed that pro-Russia militants attempted to seize the local police building. Residents in the area, meanwhile, stated that local police did not want to take orders from Kiev, and that sparked a response by the military that ended up engulfing outsiders who arrived in support of the officers.

Following a statement by the US State Department that pinned the blame on pro-Russia separatists, Paul wrote the American government should not support Ukraine’s use of military force against its own people, particularly if they are unarmed.

According to Paul, this position is a reversal of what the US was saying before protesters effectively overthrew their former government in Kiev, led by former president Viktor Yanukovich. During that time, the US urged the government not to respond with violence when protesters stormed buildings. “But now that those former protesters have come to power,” Paul wrote, “the US takes a different view of protest.”

“The US sees this as a Russian-sponsored destabilization effort, but is it so hard to understand that the people in Ukraine may be annoyed with the US and EU for their involvement in regime change in their country?” he asked. “Would we be so willing to accept an unelected government in Washington put in place with the backing of the Chinese and Iranians?”

Paul also criticized the US for threatening to implement additional sanctions against Russia should votes for increased autonomy move forward in eastern Ukraine. Although Russian President Vladimir Putin called for a delay in the vote, it went ahead anyway, a development that Paul believes shows Russia is not in control of the anti-Kiev movement.

Finally, Paul questioned why the US is involved in Ukraine at all.

“We are broke,” he wrote. “We cannot even afford to fix our own economy. Yet we want to run Ukraine? Does it really matter who Ukrainians elect to represent them? Is it really a national security matter worth risking a nuclear war with Russia whether Ukraine votes for more regional autonomy and a weaker central government?”

7 thoughts on “Ron Paul: Why Is US Involved In Ukraine?”