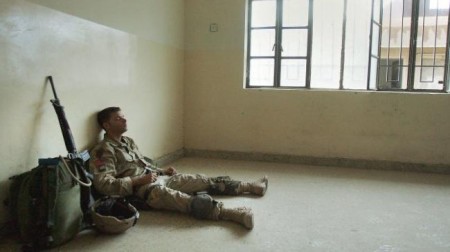 Years of war have left the US military exhausted and depleted, Gordon Duff writes

While America talks going to war in Europe, those who follow the real condition of America’s military forces, active duty, reserve and veterans, they know it to be nothing but empty talk.  Over a dozen years of war has left America’s military manpower exhausted, physically, mentally and “politically.”

Any new war will have to be fought without experienced non-commissioned officers or top special operations professionals.  Studies now show that they haven’t simply given up on military service, but that an entire generation of American military is dead, dying or disabled.

Fewer Americans are willing to believe, willing to blindly follow, willing to die for what more and more now clearly see as wars for Wall Street.

Perhaps the most carefully hidden impact on America’s ability to wage war is the epidemic of military/veteran suicides, numbers far more than anyone imagined.  Current suicide numbers actually exceed the total combat deaths from both the Vietnam and Korean wars.

There is a reason that American troop deployments into Poland and Latvia are so pitiful, despite the fact that nearly all US troops are out of the Middle East.  America’s “war games” deployment meant to intimidate Putin’s Russia accentuates a frightening fact few are aware of.  America’s trained military “inventory” is nearly totally depleted.

They aren’t just “quit” or retired, in truth, America has had well over 100,000 combat related deaths tied to  Desert Storm and the Global War on Terror that it has failed to report.  Some, well over 10,000, are from mysterious “Gulf War Syndrome,” reputed to be a “cocktail” of radiation and chemical exposure along with experimental vaccines.

However, the majority are suicides.  In 2009, a press release from the Department of Veterans Affairs cited 30,000 “veteran suicides” among those who served post 9/11.  Within a day, that figure was never to be seen again and the machinery of disinformation went into high gear.  For the past five years there have only been reports of so many “deaths per minute” or fractional counts from active duty personnel.

Were one to factor in the remaining 34,000 who failed to report status and factor a statistical mean, between 18,500 and 22,000 younger veterans died, all attributable to Bush 41/43 “wars of convenience.”

Thus, wars the public has been told account for no more than 6,000 dead actually account for 6000 direct combat deaths, over 100,000 “indirect” combat deaths and over 1 million permanent and totally disabled trained military age “veterans.”

What remains with this kind of manpower loss places the idea of a multi-front war, as described in America’s new Pacific Rim strategy, as pure fantasy.  Is this, perhaps, the rationale for billions spent on drones?

Another figure was released to the public in 2009, released and quickly “evaporated” from the public eye.  A charity raising money for veteran’s causes gleaned the real number of survivors from the Vietnam War.  Of the 2.9 million that had served in Vietnam, some only a few days or weeks, only 780,000 could be verified by both the Department of Defense and Department of Veterans Affairs as having survived.

After this, figures were no longer released to the public.  However, the damage had been done and statisticians had extrapolated some interesting information from what little was leaked.  American combat veterans have a life expectancy of 46 years.

“War heroes” quickly became “baby killers” or “fear crazed vets.”  Veterans were denied employment, subjected to public scorn and the hundreds of thousands suffering from Agent Orange poisoning and combat related stress were looked on as a burden to society.

It became a Conservative cause to label veterans as “deadbeats” and a drain on society.  The service organizations, with their tremendous political power, were still dominated by World War II veterans and saw younger vets as threatening their “ride on the gravy train.”
This policy has not only continued but in the divisive political climate in the US, veterans are being targeted.  Videos of police killings of veterans, typically an angry veteran in a wheel chair holding a mobile phone that police claim is “mistaken” for an assault rifle or bomb, fill YouTube.

Recently, a 95-year-old World War II veteran was shot by a SWAT team for attacking police with a machete.  The weapon turned out to be a “shoe horn,” and police, only 5 feet away, were unable to tell the difference.

Last week, a report by CNN cited the Department of Veterans Affairs, tasked with providing medical care for veterans, as having secret waiting lists.  In one hospital, Phoenix, Arizona, they found that 40 veterans had died awaiting treatment for what turned out to be easily diagnosed “life ending” conditions that could have been treated.

It is assumed that veterans needing expensive medical care were lied to and sent home to die.  Moreover, those veterans who complain, the “whistleblowers” face another fate.  According to attorney Robert Walsh of the Veterans Pro-Bono Legal Project, as many as 200 veterans are now imprisoned illegally, having been wrongfully prosecuted after complaining of fraud in government veterans’ programs.

Nobody Left to Fight Wars of Aggression

America has violated a “sacred trust.”  When “shock and awe” became a decade of war with no more talk of “Al Qaeda” but rather of “extremists” and “insurgents,” it became increasingly clear that America’s wars for “security” were colonial wars of conquest.  No rational person could believe otherwise although years of social engineering intended to breed a generation of compliant acolytes, trained from birth to never question even the most absurd and baseless propaganda.

Simply put, the idea of America reassuming the role of NATO protector is absurd.  What few European bases remain have only skeleton forces.  Barracks stand empty, bowling alleys closed, civilian contractors guarding the empty shell of what NATO had once been.

2 thoughts on “Weakened US Unable To Fight More Wars”