– East Ukraine Votes For Independence: Turnout Reported “Off The Charts” (ZeroHedge, May 11, 2014):

The most significant geopolitical event of the day is the east Ukraine independence referendum taking place in various cities across the region, less than two months after the Crimean case study which saw the region split away from Ukraine and join Russia, despite the fervent warnings by Kiev and the west that the result of the “rigged election” would not be accepted by anyone. As it turned out then, it only needed to be accepted by Russia which promptly took over the Black Sea territory.

Today’s vote is a carbon copy of what happened in Crimea, with the locals almost certain to vote in Independence from Kiev (even over Putin’s “objections” who has managed to distance himself from the vote if quite willingly will accept its outcome), followed by another vote that annexes east Ukraine (and subsequently Transnistria) to Russia which may be held as soon as May 18, promptly followed by the adoption of the Ruble as the regional currency.

All while the west once again, in a desperate example of futility does nothing, but merely warns of more “costs”, sanctions and claims this too referendum was illegal. The same west which, as a reminder had no problem with a violent voup in Kiev three months ago despite a signed agreement by western leaders that saw the existing government in power until late 2014. The same west which now sternly refuses to recognize what, at least superficially, is a democratic referendum.

As a reminder, this is what most likely will be the final outcome of today’s events: 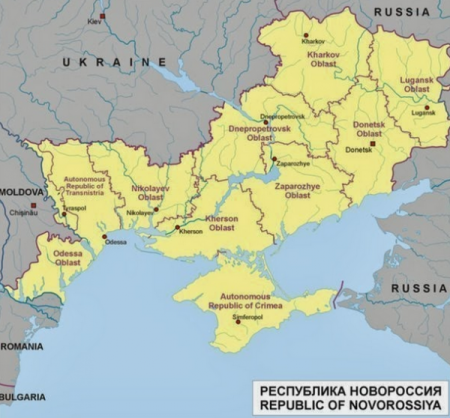 For the details of what happens on the ground, we go to Reuters:

Separatist rebels pressed ahead with a referendum on self-rule in east Ukraine on Sunday and fighting flared anew in a conflict that has raised fears of civil war and pitched Russia and the West into their worst crisis since the Cold War.

In Mariupol, scene of fierce fighting last week, there were only eight polling centres for half a million people. Queues grew to hundreds of metres in bright sunshine, the event taking on an almost festive atmosphere as one polling station overflowed and ballot boxes were brought out onto the street.

Clashes broke out around a television tower on the outskirts of the rebel stronghold of Slaviansk shortly before voters made their way to polling stations through streets blocked by barricades of felled trees, tyres and rusty machinery.

“I wanted to come as early as I could,” said Zhenya Denyesh, a 20-year-old student, second to vote at a concrete three-storey university building. “We all want to live in our own country.”

Asked what he thought would follow the vote, organised in a matter of weeks by rebels, he replied: “It will still be war.”

Oddly mature for his age, and yes – Ukraine’s violent response is only a matter of time: “Ukraine’s Interior Ministry called the referendum a criminal farce, its ballot papers “soaked in blood”. One official said that two thirds of the territory had declined to participate.” The US response was just as terminal. Via the NYT:

A State Department spokeswoman, Jen Psaki, said the United States would not recognize the results of the votes. She said the referendums “by armed separatist groups are illegal under Ukrainian law, and are an attempt to create further division and disorder,” adding that if they proceed, “they will violate international law and the territorial integrity of Ukraine.”

Far more importantly, should Ukraine be split in two – either peacefully, or through a civil war – the IMF’s bailout money ends, which after all is what this is all about.

However, while this would mean the end of the Kiev government which would be promptly swept out of power should the western money trickle to a halt, the eastern locals couldn’t care less:

Engineer Sergei, 33, voting in the industrial centre of Mariupol, said he would answer “Yes” to the question on the ballot paper, printed in Russian and Ukrainian: “Do you support the act of state self-rule of the Donetsk People’s Republic?”

“We’re all for the independence of the Donetsk republic,” he said. “It means leaving behind that fascist, pro-American government (in Kiev), which brought no one any good.”

Just as important is that the local population has no illusions about what happens next:

Some see a “Yes” vote as endorsement of autonomy within Ukraine, some as a move to independence and others as a nod to absorption by Russia.

Annexation is favoured by the more prominent rebels, but the ambiguity may reflect their fears an explicit call for full “independence” might not have garnered the support they seek and could leave them in an exposed position towards Kiev.

The NYT focuses on this question:

Despite their slapdash nature, the elections pose a risk of escalating the smoldering conflict in Ukraine by entrenching the political wings of pro-Russian militant groups, while putting the interim government in Kiev in the awkward position of arguing against what organizers describe as a democratic votes.

“The results will legitimize us before the world community,” Roman Lyagin, the chairman of the central election committee of the self-proclaimed Donetsk Republic, said at a news conference here Saturday. Mr. Lyagin said he had printed 3.1 million ballots that pose one question: “Do you support the act of self-rule for the People’s Republic of Donetsk?”

But even in Donetsk, the wording had people baffled. Some interpret the question as a vote for more local autonomy, some for independence and still others as a step toward inviting annexation by Russia, following the example set in Crimea.

In any case, the answer will be known shortly: the turnout based on journalist reports has been far greater than expected:

More on the turnout from RT:

More than fifty percent of voters in the Donetsk region have already cast their ballots, according to the head of the Central Election Commission of the self-proclaimed “Donetsk People’s Republic,” Roman Lyagin.

“The turnout is not just high, it’s off the charts,” Lyagin said. “People are queuing up at polling stations, and election commissions are working at full capacity.”

The referendum turnout in the Lugansk region has already reached 65 percent, according to the chairman of the local referendum committee, Aleksandr Malykhin.

In Mariupol, recovering from Friday’s deadly clashes, only eight polling stations have been opened, according to the coordinator of the central election commission of the “Donetsk People’s Republic”, Boris Litvinov. Those willing to vote have to wait for their turn in huge queues.

Voting is due to end in 53 locations at 10 p.m. (1900 GMT) and the rebels hope to have the ballots counted by Monday afternoon. This means that an official announcement of east Ukraine independence may come as soon as Monday night or Tuesday.

“It is not at all clear what action rebel leaders will take once the results, expected one way or another to show a large “yes” vote, have been announced. Any appeal to Russia could confront Kiev and the West with a serious challenge.”

What most likely will happen is that the newly-independent eastern republics will note that Kiev armies continue to engage in anti-terrorist operations, at which point they will request that Russia send in peace-keepers. At that point Putin wins again.

As for the visual coverage of the day’s events, here is a sampling of photos on the ground:

Finally, here is a livestream from the Donetsk central voting commission which has periodic updates on the voting process:

4 thoughts on “East Ukraine Votes For Independence: ‘The Turnout Is Not Just High, It’s Off The Charts’”