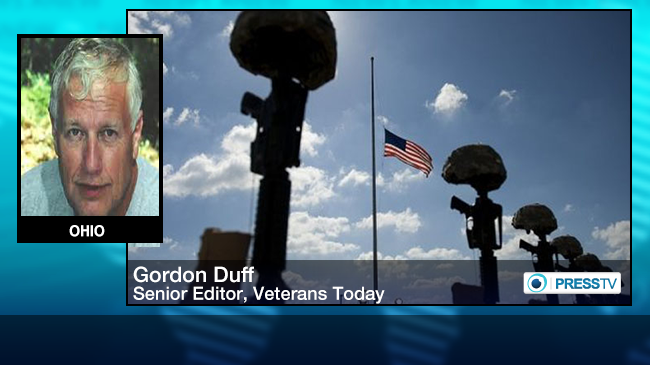 An American Marine says as many as 40 percent of those who serve in the US military are under psychiatric care, adding that up to 70 percent of war veterans have been on anti-psychiatric drugs.

Gordon Duff, a senior editor at Veterans Today, made the remarks in a telephone interview with Press TV on Thursday, commenting on a Wednesday shooting rampage at a US military base in Texas.

Specialist Ivan Lopez, an Iraq war veteran, shot dead three people and injured at least sixteen others before turning his gun on himself at Fort Hood, the sprawling Army post in Texas. According to an initial investigation into the incident, the shooter was a mentally unstable person.

“One of the issues that has come up is why should people who are under psychiatric care for depression, posttraumatic stress be allowed to carry weapons. Well, another issue might well be why they were allowed in Afghanistan and Iraq while under those same medications and that same diagnoses carrying weapons pretty much continually,  if we wonder why some of the issues have happened there?” the former American marine stated.

“And things we can add to this, a tremendous number of sexual assaults within the military, tens of thousands of veteran suicides. This is an issue of societal failure.   This is an issue of extreme indifference that war is more important to…sustain than the health of the military, than the health of the society, (and) there’s no accountability for what people do during warfare,” he added.

“The US was perfectly fine with having heavily drugged, deeply depressed, traumatically stressed people, carrying automatic weapons running around in Vietnam, where I certainly was for some period of time, or Afghanistan or Iraq or any of the other 50 or 60 countries” where the US has had boots on the ground, said Duff, a marine combat veteran of the Vietnam War.

“They are perfectly fine with that until they get home and actually shoot someone up. And here on a daily basis, what we are hearing is that they are shooting their families, they are shooting themselves. And what we have done is we have taken another generation, and this is another generation, we’ve put them in the grinder of war, we’ve eaten them up, we knew it was going to happen and we’re pretending that we’re surprised,” he concluded.