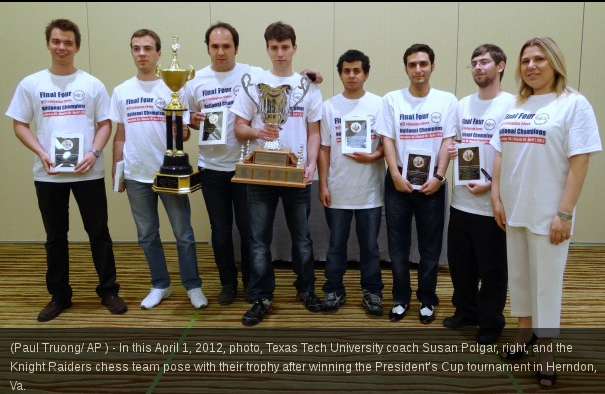 The arms race in collegiate chess — a cutthroat world once dominated by the University of Maryland Baltimore County — is generating new scrutiny following revelations that a high-powered coach at Texas Tech University requested more than $1 million in funding, including a $250,000 salary.

Texas Tech declined, and the coach, Susan Polgar, left the school and took her entire team of grandmasters to Webster University in St. Louis, where the chess world thinks at least some of her wishes were met. Webster has since won two straight Final Four chess titles amid a growing debate about the spending — a discussion that sounds a lot like those surrounding big-time college athletic programs.

(Alexandre Meneghini/Associated Press) – Susan Polgar, a women’s world chess champion, speaks during an interview with the Associated Press in Mexico City in 2007.

“Are we just starting another version of what’s happened in the football or basketball arena?” asked Richard Vedder, an Ohio University professor and director of the Center for College Affordability and Productivity. “I think we are even though the stakes are smaller.”

The account of Polgar’s requests surfaced last week in a series of stories in the Journal, Webster’s student newspaper, which filed public records requests with Texas Tech and other top chess programs for documents detailing chess spending.

Documents and e-mails revealed that Polgar, a four-time women’s world champion who makes her squad perform physical workouts to improve stamina, had requested the $250,000 in salary for her and $150,000 for her husband, Paul Truong (also a coach), funds for up to 34 full and partial scholarships, and $25,000 bonuses for tournament wins.

In an interview, Polgar said the requests to Texas Tech reflected an offer from one of multiple schools that tried to recruit her. She declined to identify the school but said it wasn’t Webster, adding that she and her husband were making “substantially less” than the offer presented to Texas Tech.

Webster says it spends $635,000 a year on chess, including salaries and expenses. That figure does not include full and partial scholarship totals for the program’s 15 players. Webster’s tuition is $24,500 a year.

Alan Sherman, a UMBC professor and cryptology expert who single-handedly built the school’s program from scratch in the early 1990s, said his team is being outspent by Webster by at least 4 to 1. He was not surprised by Webster’s big bucks chess budget.

“It is the level of funding you need these days to have a really top-notch chess program,” said Sherman, who has been agitating, without success, for more money for his own program.

UMBC has won just two Final Four titles since 2007, after winning four straight in the mid-2000s. Its program, which attracts players from Germany, Georgia and Russia, among other far-off places, offers a variety of scholarships, including five chess fellows funded by the school’s campus soda contract with Pepsi. Fellows receive full tuition and a $15,000-a-year food and housing stipend.

But its two coaches make just $22,000 a year combined, according to data provided to the Journal. Sherman, the chess director, is a volunteer.

Greg Simmons, UMBC’s vice president of institutional advancement, said in a statement that the school “has no current plans to increase the chess program’s budget.” UMBC President Freeman A. Hrabowski III told The Washington Post last year that “our guiding principle will be one of balance.”

At Webster, some faculty and students worry that balance is lacking.

They question the level of spending at a time when universities, especially smaller ones, have cut back on student aid and spending. They also wonder if the positive news media exposure helps with attracting top students, a key contention of university officials.

And in a twist, some athletes at the Division III school — where athletic scholarships aren’t allowed — are asking why the money isn’t being spent on their programs and facilities.

“I think people are very happy that the chess team is doing awesome,” said Jordan Fosburgh, a senior and president of the Student Athlete Advisory Committee. “We just feel it’s unfair how much money they’re getting compared to what we’re getting.”

Jim Brasfield, a longtime management professor at the school, said that there was no campus discussion before the chess push and that there probably should have been, especially because the school relies heavily on tuition, not big donors, for funding.

“We have to watch our pennies,” Brasfield said. “There’s no financial crisis, but there’s always a concern about spending money when you’re not sitting on a big pile of cash.”

Polgar, her husband and university officials strongly defended the spending. And Truong said he thinks the University of Texas-Dallas — another perennial Final Four contender — is spending more money than Webster. UT-Dallas said it spent about $691,000 last year, but that includes scholarships and salaries.

Webster spokesman Patrick Giblin said the school estimates that free news media coverage of the chess program exposes 85 million people each year to the university. To do that with paid advertising would cost about $2.8 million.

Katie Maxwell, the student government president, said the chess team wasn’t embraced by Webster students when it first arrived. But she thinks the stigma has lessened, especially as students have learned about the team’s outreach in the community, which includes a prestigious national tournament for young girls.

“They showcase what Webster stands for,” Maxwell said. “I think the program showcases the unique things Webster has to offer.”

Even Vedder, the college spending expert, credited Webster with being “clever,” but he added, “Let’s say you get up to $2 or $3 or $4 million, that starts to really hurt.”

Vedder also pointed to the University of Illinois, which qualified for the past two Final Fours without any scholarships.

“It makes our story kind of fun,” said Michael Auger, the Illini’s team president. “We were able to do it without that kind of stuff” — meaning big scholarships or big money.

And though Webster destroyed his team, it was an amazing, fulfilling destruction.

“The more money going to chess, the better,” Auger said. “It’s so exciting to play against them.”