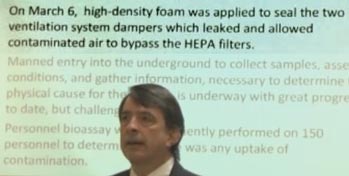 Ventilation system leakage went unsealed from when the radiation event occurred on Feb. 14 until Mar. 6

AP, Apr. 23, 2014: Board chairman Ted Wyka previewed the [Department of Energy’s Accident Investigation Board report] findings at a community meeting Wednesday […] Shortcomings were found at almost every step, from a more than 10-hour response to the initial emergency alarm to a bypass in the filtration system that allowed the radiation to escape above ground. “The bottom line is they failed to believe initial indications of the release,” Wyka said. […] Crews are still working to identify the source of the leak, which sent low levels of radiation into the air around the plant, but officials believe it occurred in the area where toxic waste was last being handled. Officials Wednesday night said there were people working in that area at the time of the fire, but did not say what they were doing.

Ted Wyka, chairman of Department of Energy’s Accident Investigation Board, Apr. 23, 2014 (at 1:04:00 in): HEPA filter bypass dampers, they represent a pathway — and they did — of unfiltered exhaust to the environment. […] They have an unacceptable design leakage for a containment boundary. That bypass dampers around the HEPA filters, which operated with the efficiency that you would expect… design leakage reduces the overall efficiency of the HEPA filter system, and was the source of the release on Feb. 14, that bypass around the HEPA filters.

– WIPP Workers ‘Not Permitted To Speak’ To The Press – Preparing For Radiation Levels So High, Only Robots Can Be Used

– Senator: ‘Radioactive Releases From WIPP Have Been At Levels That Are A Public Health Danger’ – EPA: ‘This Is A Big Deal’

– Expert: No One In The World Has Ever Dealt With Something Like WIPP Disaster – Continuous Release Of Radioactive Material ’24/7′ To Environment – Nobody Knows When Leaking Will End

– 5 Types Of Plutonium Released From WIPP; Officials Not Informing Public – Dr. Caldicott: Inhaling A Millionth Of A Gram Of Plutonium Will Induce Lung Cancer

1 thought on “WIPP: ‘UNFILTERED’ PLUTONIUM Released Into Environment For 20 Days!”