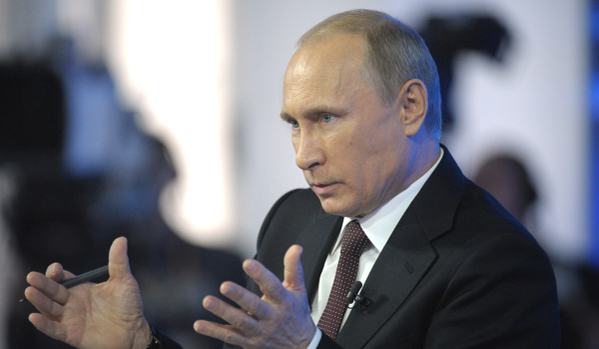 If Kiev has actually started using its army in the eastern Ukrainian city of Slavyansk, then that is a serious crime against its own people, Russian President Vladimir Putin said Thursday, Voice of Russia correspondent Svetlana Kalmykova reports. “If today’s regime in Kiev has actually begun using its army against civilians within the country, then that, without a doubt, is a serious crime against its people,” Putin said during a MediaForum in St. Petersburg.

Earlier today, a gunfight broke out between unidentified gunmen and local federalists near the eastern Ukrainian city of Slaviansk.

Two men were killed and an unspecified number were injured. Slaviansk residents were warned not to leave their homes.

The people’s mayor of Slavyansk informed RIA Novosti reporters that armored vehicles of the Ukrainian army were advancing toward the city.

Ukrainian authorities launched a special operation to crack down on pro-federalization activists in eastern regions of the country that have been swept by rallies since last month.

Protesters in Kharov, Donetsk, Gorlovka, Slavyansk and Kramatorsk refuse to recognize the legitimacy of the current Ukrainian government and are urging interim authorities to hold referendums similar to the one held in Crimea last month, which led to the republic’s reunification with Russia.

The Ukrainian authorities should start dialogue within the country and not legalizing radical organizations to settle the conflict in the country, Russian President Vladimir Putin said Thursday.

“We participated in the meeting in Geneva and signed definite agreements which include that both sides need to disarm their people, vacate administrative buildings, and so on. What’s happening: no ‘Right Sector,’ or any other radical groups have been disarmed, no one in Kiev has vacated anything. It’s just the opposite, these groups are beginning to be legalized. And who’s doing the legalization? You shouldn’t go on this path, you need to take the path of dialogue among all of the country’s residents wherever they are living,” Putin said during a MediaForum in St. Petersburg.

The events unfolding in eastern Ukraine are another piece of evidence of the correctness of the Russian authorities’ decision to support the Crimean people, Russian President Vladimir Putin said.

“Otherwise they would have witnessed the same events as eastern Ukraine and surely even worse. So, this is another proof that we have acted correctly and on time,” Putin said at a media forum of the Russian Popular Front.

“If Russia had not rendered real support to people in Crimea, it would have been impossible to organize a civilized process of the expression of people’s will there,” he indicated.

The use of the armed forces by the Kyiv authorities against their own people will have consequences, Russian President Vladimir Putin said.

“If these people have switched to the so-called hot phase – this is not some hot phase but simply a punitive operation – it will certainly have consequences for the people who make such decisions, this also concerns our intergovernmental relations,” Putin said at a Popular Front media forum in St. Petersburg on Thursday.

Only the Ukrainian parliament has “some elements of legitimacy,” and “all other legitimate authorities are in fact not legitimate for these or those reasons,” he said.

“If the current Kyiv authorities have done this [used troops against civilians], they are surely some junta or clique,” Putin said.