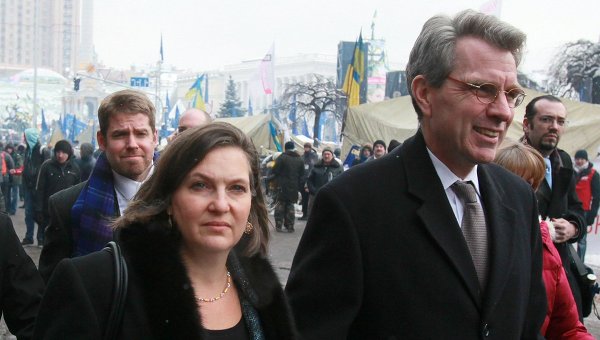 Assistant US Secretary of State Victoria Nuland and US ambassador to Ukraine Jeffrey Payette seen after meeting with the Ukrainian opposition leaders on the Nezalezhnost (Independence) square, Kiev (Archive)

MOSCOW, April 22 (RIA Novosti) – Top US diplomat for Europe Victoria Nuland acknowledged in an interview with CNN Tuesday that Washington had allocated $5 billion to support democracy in Ukraine since the fall of the Soviet Union in 1991.

“That money has been spent on supporting the aspirations of the Ukrainian people to have a strong, democratic government that represents their interests,” the US Assistant Secretary of State for Europe and Eurasian Affairs said in an interview.

“But we certainly didn’t spend any money supporting the Maidan. That was a spontaneous movement, which is a far cry from what we are concerned Russia is up to now in eastern Ukraine,” she said.

In a video posted on YouTube, Nuland told a press conference in Washington in December that the United States helped the Ukrainian government to “achieve the objectives of Ukraine’s European” and pledged to continue “promoting Ukraine to the future it deserves.”

Kremlin aide Sergei Glazyev later accused the United States and other NATO member states of having provoked violence in Ukraine. Nuland dismissed Glazyev’s beliefs on US involvement in Ukraine as “complete fantasy” saying that he could be a science fiction writer.

She also praised the acting Ukrainian government for fulfilling the tasks of trying to negotiate a deal with the IMF and holding preparations for “free and fair elections,” scheduled for May 25.

As the unrest continues in eastern Ukraine, where protesters have been rallying since March in support of federalization, Nuland urged the Kiev government to “ensure that the country is peaceful enough for those elections to go forward.”

Ukraine underwent a regime change resembling a military coup on February 22. The country’s parliament ousted President Viktor Yanukovych, changed the constitution and scheduled an early presidential election for May 25. Moscow has repeatedly questioned the legitimacy of these actions.