What a better way to celebrate the rigged markets that are telegraphing a “durable” recovery, than with a Credit Suisse report showing, beyond a reasonable doubt, that when it comes to traditional bricks and mortar retailers, who have now closed more stores, or over 2,400 units, so far in 2014 and well double the total amount of storefront closures in 2013, this year has been the worst year for conventional discretionary spending since the start of the great financial crisis!

Since the start of 2014, retailers have announced the closure of more than 2,400 units, amounting to 22.6 million square feet, more than double the closures at this point in 2013 (940 units and 6.9 million square feet). After several years of attempting to cut overhead costs, the acceleration in store closures appears to be a response on the part of retailers to cope with the challenge of ecommerce and structural declines in foot traffic, and the need to address declining levels of in-store productivity. The year-to-date totals for store closing activities now challenges 2009 as the most recent year for the highest number of store closings announcements.

While distressed retailers (eg. Radio Shack) and bankruptcies, which have reached a three-year peak year-to-date, make up 63% of the unit closures in 2014, they comprise only 34% of the total square footage closed. On a square footage basis, broadline retailers  contributed over 28% of closures, with M, DDS, JCP, TGT, and Sam’s Club participating in right-sizing their store bases.

Office supply stores have been equally significant contributors to the rationalization process as they grapple with the effects of broader distribution and deeper online penetration. We expect this trend to continue as Office Depot evaluates its real estate in the wake of its merger with OfficeMax. Even dollar stores and drug stores, which combined have consistently built out hundreds of stores per year, are beginning to reel back on expansion, with Family Dollar and Walgreens both planning to shutter  underperforming stores.

The acceleration in retail closings follows several years of negative sales growth for many retailers. After slashing expenses and taking a more disciplined approach to spending, there appear to be few levers left to pull, as the top line growth remains difficult. Mall-based stores (both department store anchors and specialty apparel) in particular appear to have taken advantage of leases that have come up for renewal, as opportunities to close underproductive stores. Those that have not participated in the trend to close stores—such as higher end retailers (eg. JWN, Bloomingdale’s, and Saks)—have been relocating existing stores to more productive malls, or areas of existing malls. JWN for example recently announced the relocation of its Westfield Horton Plaza San Diego store to an upgraded area within the same mall, and is doing the same thing in Honolulu at the Ala Moana Center.

Of course, it wouldn’t be a Wall Street sellside piece if there wasn’t a bullish spin on the data:

We would view more momentum in store closures as a positive for the retail industry. Retail as a whole remains overcapacitied…. further rationalization appears to be a necessary change in trend where even during good economic times the store base is being adjusted

Yup – nothing but blue skies ahead.

In fact, here is some more good news. As Bank of America notes, Consumer Durable spending – another key component of any, well, durable recovery – is founering. In their words: “Durable spending has had a very weak recovery by historic standards. The ratio of consumer durables to GDP shows that while the share of spending has recovered, it remains at recessionary levels.” 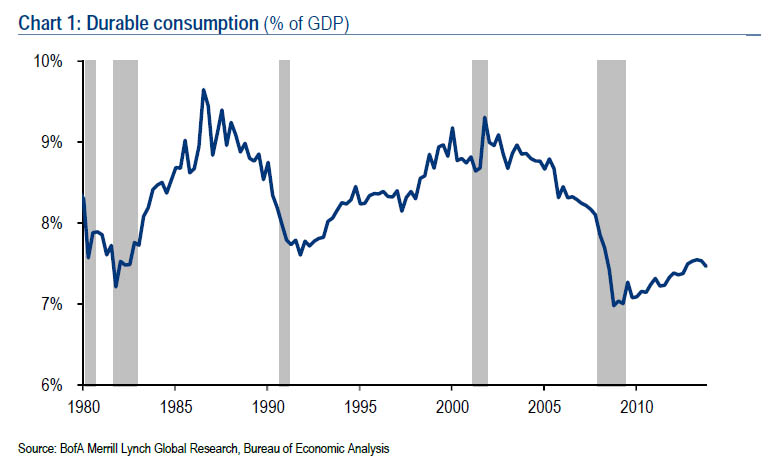 Don’t worry, that too is “positive” for the… making shit up industry.

Of course, who needs to spend on durables when one can just spend on stocks that in the new normal can never, ever go down?

3 thoughts on “Retail Store Closures Soar In 2014: At Highest Pace Since Lehman Collapse”