While US central bankers seem to believe that you can eat iPads, it seems one Indian fellow has taken the ongoing restrictions on gold imports, owning, or transacting in India to a whole new level. As we have noted previously – have led to an epidemic of smuggling as Indians continue to horde the precious metal (the only true source of financial security in their view) by any means possible. As The BBC reports, 12 bars of gold have been removed from the stomach of a 63-year-old businessman in the Indian capital Delhi. The surgeon said he had never seen a “case like this before,” and customs officials were called and confiscated the gold – where whistleblowers for gold smuggling are rewarded more richly than for cocaine and heroine smuggling. 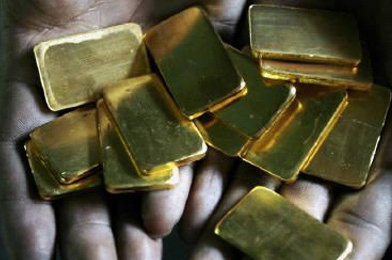 As The BBC reports, and as we have noted before, India, the world’s largest consumer of gold, has seen a record rise in smuggling after a rise in duty on imports of metal to curb the current account deficit.

Last year India’s government hiked the import duty on gold three times to curb demand for the precious metal. Gold imports, which had peaked at 162,000kg in May 2013, came down to 19,300kg in November after the hike.

But this takes the proverbial biscuit…

Twelve bars of gold have been recovered from the stomach of a businessman in the Indian capital, Delhi, a surgeon treating him has said.

The 63-year-old man was admitted to hospital after complaining of vomiting and difficulty defecating.

He told his doctor that he had swallowed a bottle cap in anger, after a fight with his wife.

But when surgeons operated they found gold bars weighing nearly 400g (14oz) in his stomach instead of a bottle cap.

Doctors, who performed the operation on 9 April, told the BBC that police and customs authorities had questioned the businessman and confiscated the gold.

According to hospital sources, the man had swallowed the 12 gold biscuits to smuggle them into the country from Singapore 10 days ago.

Dr CS Ramachandran, a senior surgeon at Delhi’s Sir Ganga Ram Hospital, said he had never seen a “case like this in my life”.

“This is the first time I have recovered gold from the stomach of a patient. I remember having taken out a bladder stone weighing 1kg from a patient. But finding gold in a patient’s stomach was something unbelievable…We found 12 gold bars lying in a stack in his stomach.”

The businessman, who had undergone four stomach surgeries in the past and is a diabetic, was admitted to the hospital earlier this month, with symptoms of “acute intestinal obstruction”, Dr Ramachandran added.

One wonders whether the previous 4 surgeries were gold-bar-related? And this time – since the rules changed… doctors decided to tell customs…because rather remarkably, as we noted previously,

In a sign of the times, whistleblowers who help bust illegal gold shipments can get a bigger reward in India than those who help catch cocaine and heroin smugglers.

Because that makes a so much sense.

“There has been a several-fold increase in gold smuggling this year after restrictions from the government, which has left narcotics behind.”

Last week, Sri Lanka limited the amount of jewellery its residents can take out of the country and it will try to monitor whether they bring it back. Pakistan banned all gold imports in August for a month as it believed much was being smuggled on into India.

Indian gold premiums have soared to $130 an ounce over London prices due to the supply crunch, compared with about $2 an ounce in Hong Kong, Singapore and Thailand.

In June, a passenger flying from Dubai was caught at New Delhi airport with about 755 grams (1.7 lbs) of solid gold staples painted grey. Officials stopped the man because the cardboard boxes he was carrying were stapled far more than seemed necessary.

“We are trying to plug all the loopholes. We have strengthened our anti-smuggling staff and installed door metal detectors,” said S.A.S. Navaz, deputy commissioner of customs in the south Indian city of Kochi. “We are spending sleepless nights.

Sleepless nights because citizens want to buy a piece of yellow metal. You might have bigger problems than gold champ.

In an effort to change that, Mumbai customs offers a reward of up to 50,000 rupees per kg of bullion seized for informers in gold smuggling cases. Cocaine and heroin informers get only up to 40,000 rupees and 20,000 rupees respectively.

2 thoughts on “Peak Smuggling: Indian Has 12 Gold Bars Removed From His Stomach”