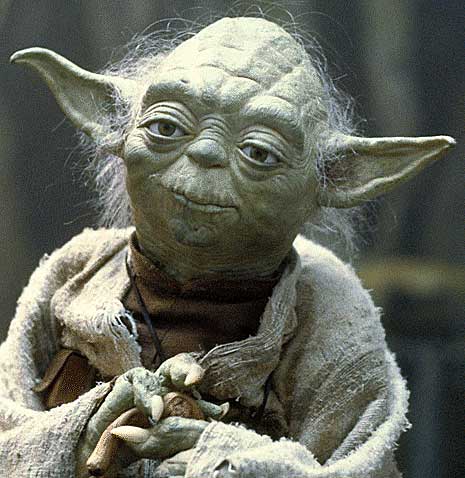 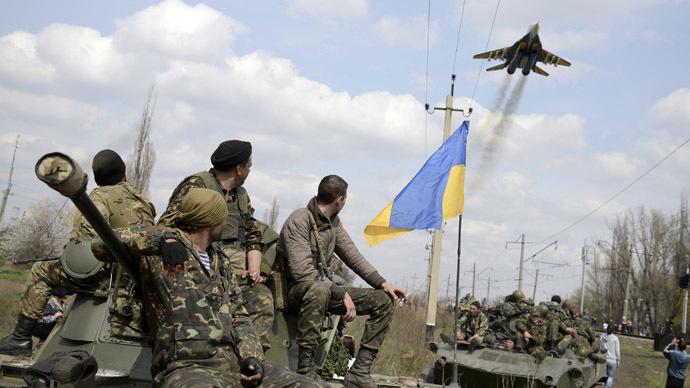 Ukrainian servicemen look at a Ukrainian military jet fly above them while they sit on top of armoured personnel carriers in Kramatorsk April 16, 2014. (Reuters/Maks Levin)

The interim president of Ukraine Turchinov wants to beat the Russians into intervening and provoke war between NATO and Russia, as it’s the only reason he can hold power, foreign affairs analyst Daniel Patrick Welch told RT.

RT: Russia has called Kiev’s action irresponsible and warned that it could trigger a full-blown civil war. How far do you see the situation going?

Daniel Patrick Welch: I think it depends completely upon whether Turchinov wants to push this to the end. The dangerous thing is that the point of it is that he wants to bait the Russians into intervening and spark of war between NATO and Russia because that’s the only reason Turchinov can hold power and not to scurry back to Italy.

RT: The White House has praised Kiev’s crackdown of the protesters saying that the authorities were acting with restraint. Do you agree with that?

DW: No, of course, it’s silly. There is an old joke about the state secretary: “How can you tell that John Kerry is lying? Because his lips are moving.” He is paid to do that. I don’t blame him personally, but it’s hard to respond to lies when they are so huge and there are so many of them.

This is an absolute horror, it is a horrific thing to do to one’s own people and there is nothing about restraint in this entire thing. Turchinov has taken the rump parliament of a rump state and a rump military. Anyone who is willing to still follow his orders and order them to kill their own people – it’s abysmal, and Kerry is either shameless or has no short-term memory or both, because this is what they were trying to counsel Yanukovich to do just a several weeks ago.

RT: At the same time the US State Department says Kiev’s actions are only aimed at bringing peace to the region. Do you think interim authorities will succeed with that?

DW: No, there is absolutely no question. What the fascists have done is cast the die that means the internal division of Ukraine. They have absolutely made the decision that they don’t care that the country will be split. The eastern population – and this is not just in the east, this is rumbling to the west as well, but more over in the east – they can’t pacify a region that doesn’t want to be because they are dealing with a fallacy, they have allowed the CIA to tell them that this is just foreign agents, this is all Russian agents. And you can see it on YouTube, you can see it everywhere with people facing off against troops, saying “We are terrorists.” “Are we terrorists? Are we foreign agents?” They can’t kill everyone, and this all is only going to get worse as far as they push.

RT: The CIA director visited Ukraine over the weekend. What do you think was the purpose of his visit?

DW: He gave Turchinov the go-ahead, basically. The string pullers of the junta told them what to do and now they are doing, that’s what I think the significance is, and that’s outrageous and immoral and a flagrant violation of the international law for them to say that Russia is interfering. The head of the Central Intelligence Agency just went, secretly by the way, under an assumed name, and met with the State Security Council and gave them the go-ahead to start this massacre. Then they have the gut to accuse another nation of interfering. You know, Orwell couldn’t have made a better script.

RT: Russia has called on the UN to condemn the escalation in the East of Ukraine. What response can we expect?

DW: We can expect nothing, unfortunately. The UN has shown itself through allowing itself to be manipulated in the crisis in Libya, in Syria and in Venezuela, as being virtual puppets of the Western regimes and they seem to be buying lock, stock and barrel. The notion that it was a peaceful demonstration that arouse to ouster dictator, so they have to protect the people – it’s standing history and truth on its head. Unfortunately, I don’t think the UN is going to help the situation at all.

RT: Would you like to see the UN more actively involved in brokering talks to end the crisis in Ukraine?

DW: Absolutely they should be. If the UN was a genuine body representing the world and its peoples and was truly interested in peace, then it would certainly be the form in which talks could proceed. They desperately need to, because the CIA-backed junta is not going to do it on its own, they are not going to come to the table. They are going to keep killing and keep destroying till something or someone makes them. It would be great if that would be the UN.

I think what they will do is side with the junta. That’s the impression that I’m getting. What is happening is that the junta is basically a bunch of lunatics and they need to be stopped, and the UN will refuse to do that, so anything that they will do if they try to intervene on the side of NATO, for example, and do what Turchinov asks that is to join his army in anti-terrorist operations (he thinks in 1950s and this is Korea), then Russia and China will probably pause with veto any such action. In other way the West will block it. So I see it as a stalemate at the UN.