“GM now wants bankruptcy protection from any of their vehicles from before 2009…….pay nothing, dump it all on the people. The courts will probably go along with it, they are corporate owned and corrupt.” 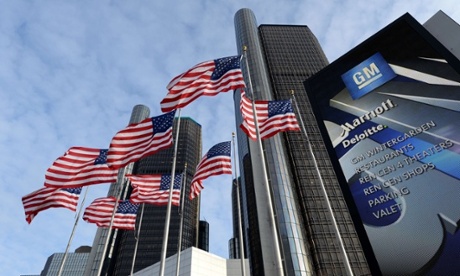 GM has said at least 13 deaths have been linked to the switch problem. Photograph: Stan Honda/AFP/Getty Images

General Motors revealed in court filings late Tuesday that it will soon ask a federal bankruptcy judge to shield the company from legal claims for conduct that occurred before its 2009 bankruptcy.

The automaker’s strategy is in a motion filed in a Corpus Christi, Texas, federal court case, and in other cases across the nation that involve the defective ignition switches that have led GM to recall 2.6 million small cars.

The motion asks US district judge Nelva Gonzales Ramos to delay action on the lawsuit until the bankruptcy court rules and other federal courts decide if the case should be combined with other lawsuits. But GM says it’s not asking to halt action on a motion to force GM to tell customers not to drive their cars that are being recalled.

GM has said at least 13 deaths have been linked to the switch problem. The switch can unexpectedly slip out of the “run” position, shutting down the engine, knocking out power-assisted steering and power brakes, and disabling the air bags. GM admits knowing about the problem for at least a decade, but it didn’t start recalling the cars, including Chevrolet Cobalts and Saturn Ions, until February.

“Just like the other ‘ignition switch actions’ that other plaintiffs have filed in the wake of public reports regarding the outstanding recall, this case relates to a vehicle designed, manufactured, originally sold and advertised by Old GM,” the company’s motion says.

GM’s motion says more than 30 cases have been filed against the company since February.

With the motion, GM is trying to limit its legal liability in the cases while at the same time it considers compensation for families of crash victims. GM has hired Kenneth Feinberg — who handled the fund for the victims of 9/11, the Boston Marathon bombing and the BP oil spill — to explore ways to compensate victims. No decision has been made.

Attorney Robert Hilliard filed the Texas lawsuit on behalf of Charles and Grace Silvas. It claims they are stuck with a defective 2006 Chevrolet Cobalt and seeks repairs, compensation for loss of value and alternative transportation.

Hilliard called GM’s motion to send the case to the bankruptcy court a “long shot” and accused GM CEO Mary Barra of directing lawyers to hide behind the bankruptcy. He said he expects a ruling soon on the request for an order for GM to tell owners to keep the recalled cars off the road.

GM has said owners can continue safely using the cars if precautions are taken.