Following the surprise announcement by Clark County’s Sheriff Douglas Gillespie this morning of a deal brokered to end the BLM’s occupation of the Bundy Ranch and Gold Butte, rancher Cliven Bundy has moved to reclaim some of his cattle previously stolen by the BLM.

After the Sheriff’s statement on stage at Camp Bunkerville, Cliven Bundy then made a list of demands, calling for the US Federal government’s 200 armed BLM agents to wrap-up their operation, and that they should begin “disarming the park service rangers”, and remove their equipment and structures to be “torn down immediately – within the hour”.

That hour came and went, and with the Clark County Sheriff no where to be seen, Cliven Bundy took the stage at Camp Bunkerville and announced that protesters and supporters should pick up their things and move their vehicles to nearby Interstate I15 where the men on horseback would orgainise the repatriation of cattle previously stolen by armed BLM agents this past week. Traffic leading to I15 quickly slowed to one lane, prompting Nevada Highway Patrol and Metro Police to be called out to the scene – but only to direct traffic.

20 Bundy cowboys on horseback were then deployed from the ranch to the BLM compound near the crossing at I15 where the Bundy herd is being held.

Cowboys are in process of in organising a safe crossing over the interstate to gain access to the compound where the Bundy’s cattle is being held.

Incredibly, the actions this afternoon have thus far been peaceful and well organised, with protesters coperation with law enforcement to help facilitate an orderly transfer of the livestock back to the Bundy ranch (see photo below, taken from the highway). 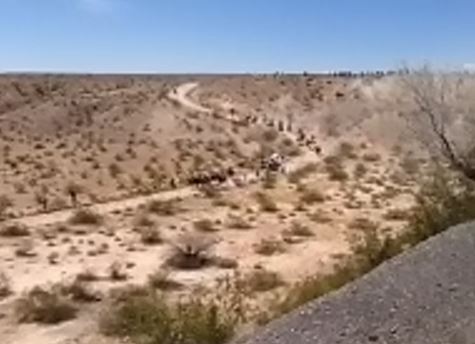